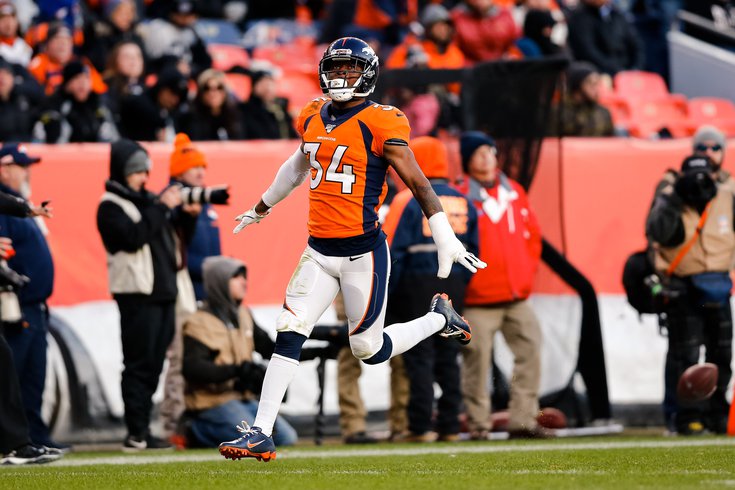 UPDATE [3:05 p.m.] — The Eagles got some more depth at safety, in the wake of Malcolm Jenkins' departure as they are going to sign Will Parks, a report said.

Versatile #Broncos safety Will Parks, a Philly native, is heading home. Parks is signing with the #eagles on a 1 year deal per source. Parks had a lot of interest from around the league over the last few weeks.

It's a one year deal and will compete to start alongside Jalen Mills and Rodney McLeod.

UPDATE [2:55 p.m.] — Nelson Agholor will be a Raider next season, according to a report that just surfaced.

The #Raiders are signing Nelson Agholor on a 1-year deal. A new beginning for the former #Eagles WR. https://t.co/SxTxwSuI3Q

The Eagles drafted Agholor in the first round of the 2015 draft and he's had quite an up and down career in Philly to say the least. Well have more on the move, as well as Jatavis Brown from Jimmy Kempski on our Eagles page.

UPDATE [2:10 p.m.] — The Eagles apparently are addressing one of their many voids today, as the team is reportedly signing linebacker Jatavis Brown.

Free-agent linebacker Jatavis Brown is signing with the Eagles on a one-year deal, per @RosenhausSports.

Brown is 26 and as the team is currently constructed, could get playing time. He has 23 NFL starts and is a former fifth round pick. Follow all the analysis on the recent signing below:

With lots of decisions left to be made by the Eagles as they slowly roll out their 2020 roster building strategy, we thought it was a good time to check in with three budding rumors as they pertain to the team moving ahead.

First up is Ertz, who becomes a free agent after 2021. According to Michael Silver at NFL Network, the Eagles offered Ertz an extension already, which he declined. Silver reported that the deal was bigger than the one Austin Hooper inked with the Browns last week.

Austin Hooper got paid. Zach Ertz, Travis Kelce and George Kittle are in line for raises. From earlier on @nflnetwork @wyche89 @RhettNFL pic.twitter.com/bd8WL1qgFE

Assuming that report is true, what can we glean from it? Well, Ertz will be 30 soon and the Eagles like to lock in their best players earlier rather than later — a tactic we have seen over and over again. Was Ertz unhappy with the money offered?

If so, his abstention from signing makes sense. However, with Dallas Goedert in toe, it may be hard for Ertz to increase his value in subsequent years. It will be interesting to see if the two parties strike a deal this season to avoid his becoming a free agent two springs from now.

Despite all the musings from Eagles websites, and from Ngakoue himself, that he wants to be traded and traded to the Eagles after getting tagged in Jacksonville, there doesn't seem to be much there.

.@MikeGarafolo says on NFLN nothing going on right now on a Yannick Ngakoue trade, to Philly or anywhere.

Ngakoue is 24, and has the potential to be an All-Pro for years to come. It makes sense that the Jags are not shopping him, even though he seems utterly unhappy with his situation in Jacksonville. The Eagles, who have a stout defensive line as it is, may be happy to kick the tires or take advantage of a buyers market, but don't expect them to surrender any serious assets in pursuit.

Sources I spoke with this AM were under the impression that compensation for Yannick Ngakoue in a trade began with a first-round pick. Or teams in the top half of the round would have to get creative. This is a player who has never had a season w/less than 8.0 sacks

The Eagles let Peters go so he could find a new place to play, without slamming the door shut for a possible return. His replacement, Andre Dillard, appears ready to take over here, but it would be hard to say no to Peters returning to add insurance and experience at the tackle spot.

However, with Tom Brady now networking to try and build a contender in Tampa., a natural landing spot for one of the greatest Eagles of all time seems to be waiting for him.

Just mentioned on @SportsCenter , the guy I could see making sense for the #Buccaneers to sign is OT Jason Peters if he is willing and wanting to move to RT. Immediate upgrade, buys them time to develop his long term replacement. Something to keep an eye on. 😏

We'll help keep track of those rumors, and every other as we track the signings and pieces of NFL and Eagles related news all day with our live stream/open thread below: