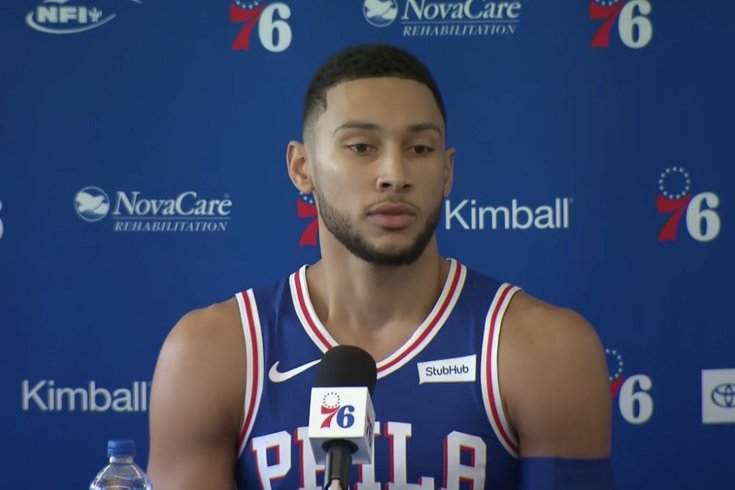 As they do every season, the Sixers are holding their pre-training camp media day in Camden at the team's facility.

It will be the first chance for the press and for fans to hear from stars Joel Embiid, Markelle Fultz, Dario Saric, Ben Simmons and others since the team was eliminated from the playoffs by the Celtics last spring. It will also be the first time since the draft to check in with rookies Landry Shamet and Zhaire Smith.

Below we'll keep you updated all day long as the cast of characters step to the microphone before the long marathon of 2018-19 begins.

The Rookie of the Year talked about working on his jump shot and scoring more, his TV show deal with NBC, and how excited he is to face the Celtics in Boston again.

"I'm not going to come in and hit threes this season, that's not what I'm going to do," Simmons says while discussing his goals and things to improve this season

"Scoring the ball, defensively getting better, it's really everything,. Everything I am doing on the court I wan tot get better at... free throws, I want to keep working toward being great." — Ben Simmons #Sixers

Ben Simmons on his potential TV show: "NBC loved it and went with it, it's really just going to be about our relationship and how things that happen, it's really more of a comedy, a sitcom. Hopefully it goes through…"

Will he appear on it?

The 6-foot-10 stretch forward from Australia spoke about his role on the team (likely a scorer off the bench who can guard multiple positions). He also has an interesting connection to fellow Aussie Simmons.

#Sixers' Jonah Bolden: "My dad and Ben's dad were really rivals in Australia...."

An appearance in the NBA Finals is what Joel Embiid considers necessary in order to call next season a success. The big man said he had a fun summer but also a productive one in his first healthy offseason. He also watched a lot of film. Some highlights:

What has Joel Embiid been working on? #Sixers pic.twitter.com/pqZn8ABjfE

"I think he's going to show everybody why he's the No. 1 pick. I think he's more than the shot," Embiid says of what he expects from Fultz

Joel Embiid on LeBron James picking #Lakers over #Sixers: "I have a lot of respect for him and he made his decision. We have a lot of talent on this team, he would have been a great piece to have but it didn't happen so not it's on guys like me to even take it to the next level."

"I remember dunking on him really bad," Embiid jokes when asked about what he thought when Elton Brand got hired.

The wryly veteran said he thinks ultimate success with the Sixers means "an NBA Championship."

"We all recognize we have a lot more to do," he said. "The East for as much as it gets knocked has a lot of good teams, it will be competitive and our goal will be to get home court for as many games as possible."

"I'm sure he has some sort of algorithm for beating the Celtics," JJ Redick on Brett Brown #Sixers

Known for his hustle and grit, Saric expects the Sixers to make an even bigger step in 2018-19 with healthy pieces returning. His personal goals for the year, he says, is to have a faster start to the year.

"Still what I can do is come on the court and play next to these guys and have a better season than last year," he said.

Fultz showed up with cornrows (Allen Iverson shout out) to media day and spoke with confidence. His demeanor paired with the videos that emerged with him shooting his butt off all summer long certainly give Sixers' fans enough to be optimistic about.

McConnell became a mythical fan favorite over the last few seasons but is sure to lose precious playing time to Fultz. How will he handle that?

"Anybody in the NBA wants to play and contribute but thats not going to change the type of friend or teammate I am to anyone," McConnell said. "Markelle gives us a really good chance to win and that's why he's going to play and I'll be the first person off the bench cheering for him."

As always, McConnell wasn't shy to flash some charm and humor:

T.J. McConnell jokes that he's most excited for, "the short flight" on their China trip

The first of Philly's two first rounders was cleared to put weight on his injured foot and will be reevaluated in four weeks.

"I've been shooting on a scooter and working on ball handling," the rookie said of what he's been working on as he rehabs from a Jones fracture.

The former Hawk and new Sixer had a very long offseason as Atlanta missed the playoffs last year. He took that time to work and get ready to join a team that surely will have a longer spring this coming hear. Here is his advice from time on a 60-win Hawks team a few years ago:

"The playoffs are a whole different animal, the intensity, the attention to detail, you play the same team multiple times. if you work on the right habits early in the year, while it is a different game in the playoffs if you're able to look back at the preseason and early parts of the season if we are challenging ourselves every day to build these habits when it wasn't easy that carries over"

Korkmaz went from the Sixers to Europe to Summer League and back to Europe, and then back to Philly for training camp in a busy summer for the young foreign guard.

Needing find a way to earn a place in the rotation, the gifted scorer knows what he has to do to get minutes on a regular basis: "I need to show something on defense."

The veteran forward elected to return for another year. What went into that decision?

"Family. I talked to my family and they absolutely love it out here. I never moved my furniture out of my place at all, they were like 'we are already here,' Just the end of the year how it ended and knowing how it could have gone further... I wanted to give it another shot."

Joel Embiid looking mischievous. Up to something? #Sixers pic.twitter.com/FIVIiYbxaF

Shooting, ball handling and finishing — three things RoCo says he worked on this offseason as he tries to earn his $16 million this season.

"The potential of this team is sky high. Based on what I've seen from guys putting in work... everyone took that Boston series as a lesson to go overboard as far as the summer goes and coming back ready to compete." — Robert Covington on what the 2018-19 #Sixers can do

Acquired in a trade this offseason, the 10-year veteran said the Sixers and this team is his best chance to win a title.

"In my opinion they should have beat Boston last year," he said.