L.J. Fort, no stranger to being cut, finally showing what he can do with Eagles 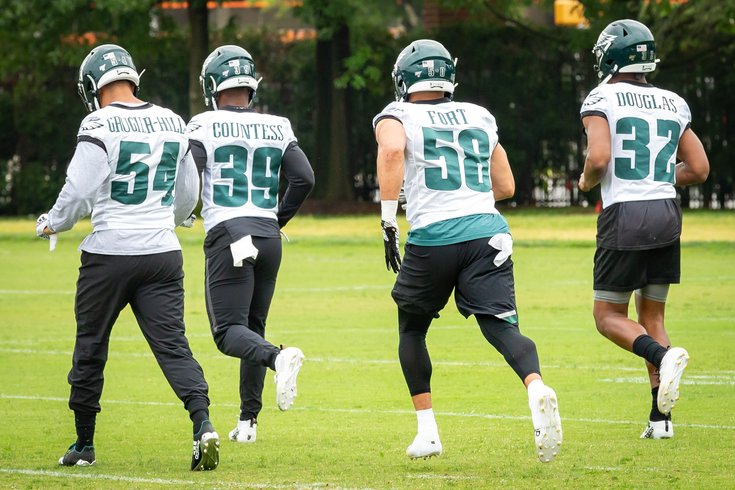 For some — the top players like Fletcher Cox or Brandon Graham — it's a life where hard work is paid off with millions of dollars, awards and job security. But that isn't the story for most professional football players.

For L.J. Fort, an inside linebacker the Eagles signed this past offseason, it is a grind, it is humbling and it is constantly forcing one to contemplate one's choice of profession.

Fort has been released, waived or cut 14 times since 2012, by the Browns, the Broncos, three times by the Seahawks, by the Bengals, by the Patriots, and three times by the Steelers. Six times he's been a member of an NFL practice squad. And after finally getting a chance to play enough in Pittsburgh this past season, making 48 tackles (with three for a loss), he signed a three-year, $10 million deal with the Eagles.

"I feel like last year was a great opportunity for me to display my potential upside," Fort said during the Eagles' second session of OTAs this week. "I feel like I haven’t gotten there yet. Hopefully this year I have a chance to do that.

"I want to be a key part in winning a championship. Hopefully as a starter."

Fort is the beneficiary of some injuries and no-shows at OTAs this May. He's not only been taking first-team reps as the team's mike linebacker, he's also been the signal-caller in the defensive huddle.

"I feel like I am adjusting well, picking stuff up, more of it is forgetting the old scheme I knew for the last four years," Fort said. "It’s big time. The reps and experience you can't replace, getting out there with the first team is valuable."

Mostly a special-teamer with the Steelers, Fort fought his way to getting snaps at linebacker, and starting two games as Pittsburgh fell short of the postseason last year.

Ironically, his only other start at linebacker came way back in 2012, when the undrafted free agent made his NFL debut with Cleveland against the Eagles in Andy Reid's last year in Philly.

Fort says he has that game ball proudly displayed in his house. If things go well for the 29-year-old Iowa product, it won't be the only Eagles-related football he has in his collection. He just has to make the 53-man roster and avoid being a compensatory pick casualty (cutting Fort would, in theory, gain the Eagles a late round pick in the 2020 draft).

The Eagles are likely to carry five linebackers, so he'll need to beat out some of his current teammates to clinch a spot.