Local funnyman has a ‘Line’ on vintage TV game show

This Friday, local comic Dave Metter produces “What’s My Line?” on the stage of the Good Good Comedy Theatre in Chinatown 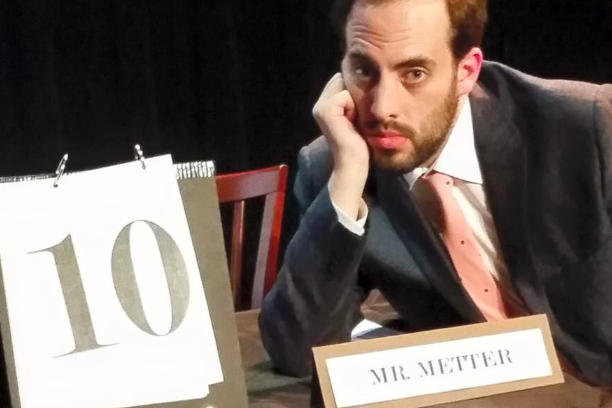 This Friday, and on the third Friday of every month, local comic-writer Dave Metter produces “What’s My Line?” on the stage of Good Good Comedy Theatre in Chinatown.

Maybe it isn’t the hippest show currently airing on television, but “What’s My Line?” is pretty damned cool.

The premise is quite simple: A panel of four celebrities (who today are virtually unknown to the general public) ask a series of “yes or no” questions in order to determine the occupations of guest contestants. Recent episodes have included a woman who raised worms, a one-time governor of South Dakota and a woman who rode the horse that did a high-dive act at Atlantic City’s Steel Pier.

But what makes watching “What’s My Line?” so interesting and entertaining goes well beyond its premise. The reruns offer a glimpse into the notions of “celebrity” 60 years ago, as well as a degree of wit and sophistication--and a very grownup atmosphere--that is generally missing from television today.

The panelists were major media players of the era (Dorothy Killgalen and Bennett Cerf were, respectively, a nationally syndicated gossip columnist and the head of Random House, the publishing giant; on at least one episode, then-actor Ronald Reagan was an interrogator). They all epitomized mid-20th-century glamour and sophistication.

Sartorially, host John Charles Daly and the panelists were always elegantly garbed (evening dress for the men and haute couture for the women). And, given the mores of the day, their often-hilarious ad-libs never even approached the realm of the sexual—imagine that today!

But as much fun as watching the reruns can be, here’s the coolest part of all: Philadelphians can avail themselves of a live, contemporary version of “What’s My Line?”

On the third Friday of every month (including Feb. 17), local comic-writer Dave Metter produces “What’s My Line?” on the stage of Good Good Comedy, an intimate performance space on the western fringe of Chinatown.

Metter, 31, approaches the monthly gigs in neither an ironic nor satirical manner. His admiration and respect for the quiz game are sincere.

“I had been running a different show, a fake local news show that won a couple of awards [distributed by the local comedy blog, WitOut] then was summarily cancelled,” offered the Main Line native.

“I wanted to make a new show; I always thought ‘What’s My Line’ would be a fun show to do.

“I used to stay up late and watch reruns of it with my dad, who passed away when I was 17. I figured it would be a way to honor him.” Besides, he added, “The show I had been doing was fully scripted, and I figured this would be a bit easier.”

But how do you sell something based on a TV program with which most potential audience members are unfamiliar?

“A lot of people who attend are millennials and don’t necessarily know ‘What’s My Line,’” he conceded, “but I think it’s a pretty foolproof show. It’s simple. It has this ‘I-know-something-you-don’t-know’ aspect because the audience knows the job but the panel doesn’t.”

He added that the basic concept of the show is equally uncomplicated, which makes it easy for people who never saw the TV series to follow. “And,” he reasoned, “it’s something novel.”

The live “Line” mostly follows the TV show’s format: A four-person panel asks questions to ascertain the guest’s occupation. Since the program’s debut in May 2014, those asking the questions have always been local comedians. But this month, the inquisitors will all be past guests.

As for the occupations presented, Metter said they have included a professional cuddler, a ventriloquist, a mohel (one who performs ritual Jewish circumcisions) and an opera singer.

One aspect that Metter’s version doesn’t share with its televised progenitor is the use of celebrity guests. In these segments, the panelists were blindfolded (otherwise, they would have immediately recognized the likes of Joe DiMaggio, Louis Armstrong, Frank Sinatra, Clint Eastwood and Salvador Dali).

“We have guests where we blindfold the panel for certain reasons, but other than local news people, athletes and politicians, I don’t know how many would be of interest to people. It’s more about the job than the person.”

For Metter, “What’s My Line” has been nothing but a joy.

“I’ve done a lot of different shows…and you have bad nights,” he said.

“But I’ve been doing this three years and I don’t think there’s ever been a bad show.”