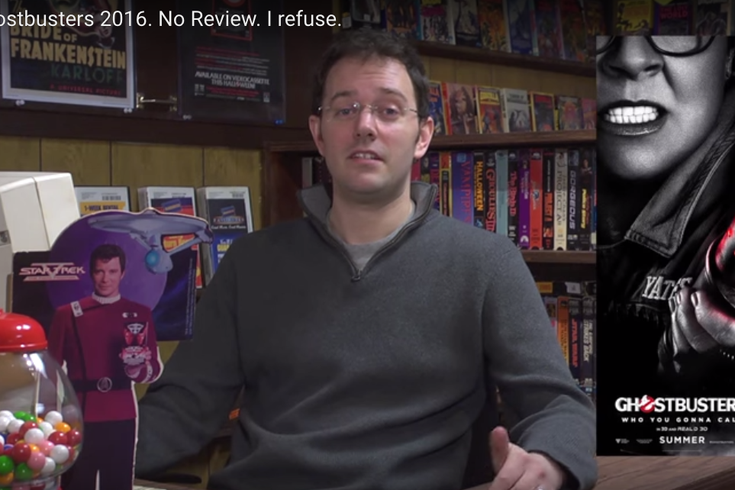 Quick backstory: Last year, it was announced that the classic comedy "Ghostbusters" was being rebooted with an all-female cast. This past spring, the first trailer for that reboot — starring Kristen Wiig, Melissa McCarthy, Kate McKinnon and Leslie Jones — became the most disliked video in YouTube history. Critics said the trailer suggested an apparent lack of the same humor from the original and an over-reliance on special effects, while others said that criticism stank of sexism.

Enter James Rolfe, aka the "Angry Video Game Nerd," a Haddonfield, New Jersey, native who lives in a Philly suburb. Known for his film reviews and web series published on his YouTube page Cinemassacre, he said in a May video he refused to go see or review the new "Ghostbusters" film because it looked so bad.

He argued the title was misleading as it doesn't link to the original plotline, that the effects looked contrived, and that it doesn't seem to take lessons from other successful reboots; this, of course, was all based off the trailers. You can watch the video below:

Then, the backlash began. The accusation from many was that his refusal was based in misogyny, even though he never mentioned gender. Blogs and websites both subtly and explicitly accused him of such. Comedians Patton Oswalt and Dane Cook, along with many others, weighed in on Twitter:

This moron at cinemassacre James Rolfe apparently hates that Ghostbusters is being updated with… https://t.co/hzvEWitL6v

I really wanted to hate this Cinemassacre GHOSTBUSTERS review but I'm such a fan of noisy, thick-saliva swallowing it won my heart.

Finally forced myself to watch that AVGN/Ghostbusters vid and it's more insufferable, misguided and illogical than I feared.

I decided to watch the AVGN's vid on Ghostbusters and I can't finish this. Oof. Kinda want to go see it in theaters just because of this.

Others, however, came to Rolfe's defense, saying they thought it unfair to accuse Wolfe of sexism just because he doesn't want to see the movie:

I don't agree with AVGN's opinion regarding the new Ghostbusters, but I certainly don't think his opinion is sexist.

Hmm, did the people upset about the AVGN Ghostbusters video actually watch it? There's literally nothing sexist there.

The fallout over Rolfe's video has now made it all the way to The New York Times. In an interview published Tuesday, Rolfe, 35, said the backlash made him angry because he felt that many critics hadn't even watched his video. But The Times' Hollywood writer, Brooks Barnes, was quick to point out that seems hypocritical, considering Rolfe's "Ghostbusters" stance:

He was offended by some of the blowback — because, as he wrote in an email, it seemed to him that those angry over his video “have not watched it, or have been misquoting me or twisting my words.”

Mr. Judging Before Seeing was mad because people were judging before seeing.

Mr. Rolfe also seemed agitated that the people ripping him apart, some of whom went so far as to threaten his life, had no interest in his complexity as a human being.

Barnes, for his part, admitted he took a preemptive stance on Rolfe's video before watching it and noted it wasn't as bad as he determined it was before seeing it.

"It’s not overtly sexist — though there are whiffs — and his points are rather tame compared with a lot of the other 'Ghostbusters' muck online," Barnes wrote.

"Ghostbusters" is out July 15, by the way, for those not refusing to see it.