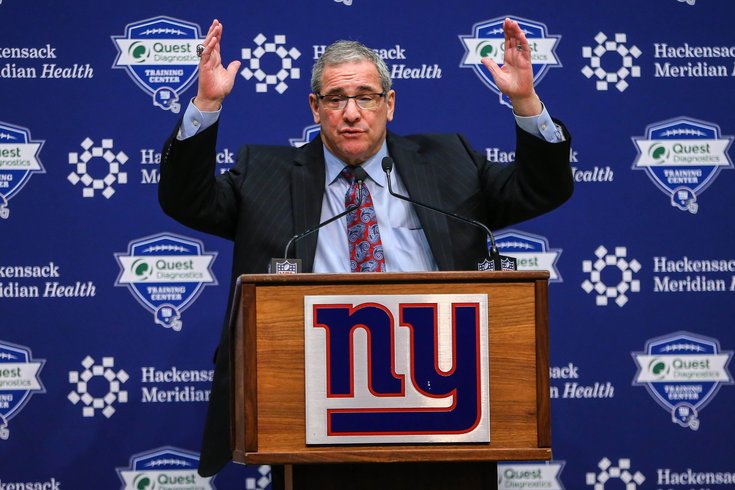 The NFC East teams were very busy in the first round of the 2019 NFL Draft, as the Eagles, Giants and Washington all traded up to select players. The Giants made three first-round picks, Washington made two, and the Eagles made one. The Cowboys did not have a pick, because they traded it for wide receiver Amari Cooper.

Let's analyze each pick that the "other" NFC East teams made on Day 1.

• Pick 6: Daniel Jones, QB, Duke: With the sixth pick ("Pick 6") in the draft, the Giants took a quarterback who probably didn't belong in the first round, at all.

Jones is a nice quarterback. He has ideal size at 6'5, 221, he throws an accurate ball (though his completion percentage is low because Duke's receivers stunk), he has some mobility, and he's thought of as a smart kid. Certainly, there are plenty of things to like about him.

But good God, pick 6?!? No. Freaking. Way. Jones does not have great arm talent, and it's not likely to get much better, because he already has good mechanics. By that I mean it's not like he's going to get to the next level, and NFL coaching is going to drastically improve his delivery, allowing him to throw with better velocity or accuracy than he did in college.

When asked what the selection of Jones meant for the possibility of this being Eli Manning's last season in New Jersey, GM Dave Gettleman said that Eli might not be going anywhere.

"Absolutely not," he said. "Maybe we are going to the Green Bay model, where (Aaron) Rodgers sat for three years. Who knows? It’s one of the deals where it doesn’t make a difference what position it is, you can never have too many good players at one position."

• Pick 17: Dexter Lawrence, DT, Clemson: Personally, I liked Lawrence more than most. In college, because Clemson had an absurd overabundance of pass rushers, Lawrence didn't get many opportunities to rush the passer, and he finished his three-year career with 10 sacks. However, in my view, that doesn't mean he can't affect the passing game. If you single block him, because he is so big, strong, and surprisingly nimble for his size, he'll more often than not push the pocket, while getting his share of sacks and hits as well.

For once in my life, I found myself nodding in  agreement with Gettleman in his assessment of Lawrence, even if he sounded a little creepy at the end of the quote.

"This is where numbers don’t tell all the story," Gettleman explained. "Defensive tackles can affect the pass rush if they get consistent inside push. How many times have you guys watched a game, and the ends come screaming off the corner, and the quarterback steps up, and there’s nobody there. You get inside pass rush, those ends come screaming off the corner, they’re going to affect it, and if the guy is getting push, the quarterback is going to step up and Dexter will give him a kiss."

Ugh. I agreed with something Gettleman said. Hang on, gonna go take a shower.

Of course, the Giants don't have good edge rushers, so Lawrence's effectiveness will be wasted to some degree until they do.

• Pick 30: Deandre Baker, CB, Georgia: Baker is another player who I liked quite a bit, and thought was worthy of a late first-round selection. According to cfbfilmroom.com, Baker allowed just nine completions and one TD on 34 targets in 2017. He had three interceptions. In 2018, he allowed 10 completions and no TDs on 27 targets, and two interceptions. Baker is also a very good tackler. In 2017, he had 44 tackles, and only had four missed tackles, a good ratio for a corner. In 2018, he had 40 tackles and no missed tackles, again, according to cfbfilmroom.com.

However, he's on the smaller side, and he ran a below average 4.52 at the Combine. Also, the cost to move up to get him wasn't cheap. To move up seven spots from 37 to 30, the Giants had to give up a fourth- and a fifth-round pick. If Baker were a top 15 type of player still available that late, then sure, go ahead and pay that premium. As is, I don't think he was worth the cost to move up.

• Pick 15: Dwayne Haskins, QB, Ohio State: Washington waited for Haskins at pick 15, and their patience paid off, as they were able to add what will likely be their Week 1 starting quarterback, without having to move up.

Haskins has a sturdy build at 6'3, 231. He is a classic pocket quarterback with very good arm strength, but limited mobility. Because of his plus arm talent, Haskins is willing to take chances. Some view that as a negative. I don't. In time, he'll learn when to take shots and when to hold back, but early in his career on a team that isn't going to contend, let it rip.

While Washington isn't exactly a model franchise, Haskins has a chance to succeed there. His receivers stink, for now, but he'll be playing behind a very good offensive line in an offense led by the underrated Jay Gruden.

• Pick 26: Montez Sweat, Edge, Mississippi State: Washington traded up with Indianapolis to get Sweat, moving from 46 to 26, with the cost being a 2020 second-round selection. I'm torn on whether that's a good deal or not. Washington has a chance to be really bad in 2019, and if their second-round pick in 2020 is somewhere in the 30's, Indy will be thrilled that they made this trade. Surely, that's the bet that the Colts are making here.

That said, the value that Washington is getting in Sweat at pick 26 is very good. Sweat is a long and lean athletic freak of nature who had good production in college, impressed at the Senior Bowl, and then absolutely destroyed the Combine. There is no question about his ability, but there were rumors that he could be drafted later than expected because of some character concerns, and that's exactly what happened.

After losing Preston Smith in free agency, Washington needed added presence on the edge, and Sweat gives them that.

While the rest of the NFL was making picks in the first round of the NFL Draft, the Cowboys sat back, content with themselves, with an attitude like, "We'll take Amari Cooper instead, thank you very much."

Obviously, Cooper was very good for Dallas after they traded their 2019 first-round pick to Oakland to land him. In nine games with Dallas, Cooper had 53 catches for 725 yards and 6 TDs. Extrapolate that over a 16-game season, and he would be on pace for 94 catches for 1289 yards and 11 TDs. He also had 13 catches for 171 yards and a TD in two playoff games.

If he can maintain that level of production for a longer period of time, then yes, debate over; he was worth the first-round pick.

That said, first round picks are obviously extremely valuable resources, especially for Dallas. While their front office makes a lot of dumb moves, the one thing they have done really well is draft in the first round:

There is one definitive miss there so far (we’ll see what happens Charlton before calling him a miss, though it's not looking great).

The value of the first-round draft pick aside, there's also the matter of Cooper's pay. In 2019, Cooper is scheduled to count for a whopping $13,924,000 against the cap on his fifth-year option. Cooper and his camp have all kinds of leverage to either earn a very lucrative long-term deal, or play out the 2019 season making just under $14 million.

The Cowboys already signed Demarcus Lawrence to a five-year deal worth $105 million with $65 million guaranteed. That's just the beginning. They are also going to have to sign Dak Prescott, Ezekiel Elliott, Byron Jones, and Jaylon Smith over the next two years. Prescott is going to make close to $30 million, Zeke will be up over $15 million/year, while Jones and Smith could both fetch over $10 million/year.

If Cooper were to sign a contract extension this offseason, what will that cost? Considering Sammy Watkins recently got $16 million/year, Jarvis Landry got $15 million/year, and Stefon Diggs got $14 million/year, you can bet that Cooper is in for a pay day greater than those guys, especially if the perception is that the Cowboys won the division as a result of acquiring him, as many believe.

Cooper's early returns were great, but Dallas isn't done paying the bill on that trade yet.