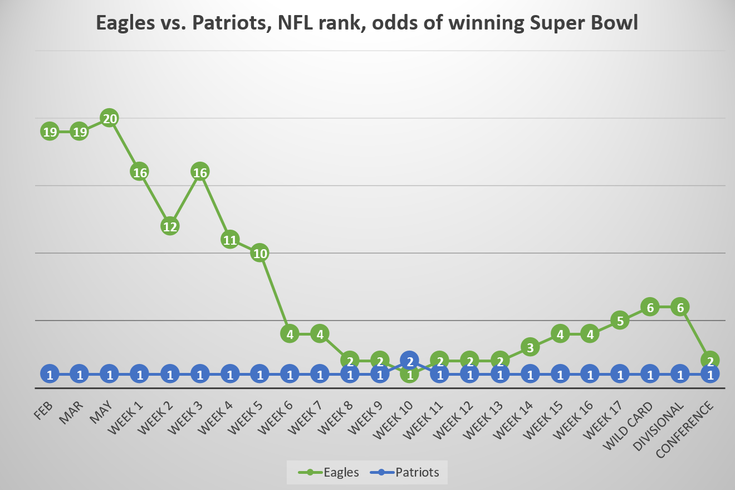 When the 2017 NFL season began, the Philadelphia Eagles were long shots to win Super Bowl LII. The New England Patriots? Not so much.

Courtesy of Bovada.lv, we took a look back at the Super Bowl odds for each team as they progressed throughout the season. The Pats' journey is straightforward. They are the defending Super Bowl Champions, with perhaps the best player in NFL history at quarterback, so they were favored to win it all, almost wire-to-wire.

The Eagles' season was much different, as it took some time for the Birds to make believers of the oddsmakers, as the graphic in our cover photo shows. In the middle of the season, they briefly overtook the Pats as the favorites, which the Pats took back while the Eagles were on their bye.

Obviously, near the end of the season, the Eagles' odds took a tumble when Carson Wentz was lost for the season.

Here were the updated Super Bowl odds each week for the Eagles and Patriots as the season progressed:

The Eagles went from 50/1 long shots to NFC Champs. In the Super Bowl the Eagles are underdogs, as usual, as the Pats are favored by 4.5.