The Phillies season will be over in two weeks and it’s very likely to end with them losing at least 90 games for the second straight season. (They are currently on pace to finish the 162-game schedule at 72-90).

It would mark the fourth consecutive season that the Phillies lost at least 89 games, though. But, hey, it’s not all that bad: the Phillies once finished with at least 89 defeats in 13 straight seasons spanning the Great Depression and World War II.

So don’t complain too loudly about the current malaise of the local nine when your grandfather is within earshot.

Sure, when a team is regularly flirting with 90 losses there is a lot of bad. But you can bend statistics however you’d like to frame an argument (see what I did with the “89 losses” thing?) and so it’s also worth pointing out that the odds of the Phillies losing exactly 90 games this year are probably even to the probability that they’ll finish with a record 10 games better than they did in 2015 (63-99).

Were there concerning elements of the 2016 season? Sure. Maikel Franco didn’t take the next step forward many predicted after spring training, Aaron Nola and Zach Eflin had their seasons cut short with concerning injuries, and neither Nick Williams or J.P. Crawford pushed for promotions with flourishing finishes at Triple-A. First-year general manager Matt Klentak was asked about several of those storylines last week.

But there were some positives to take out of 2016, too.

• Odubel Herrera is a legitimate piece moving forward. A year ago, the Rule 5 success story was easily the most encouraging aspect of a season that saw the team flirt with 100 losses and witness a mass exodus of veteran talent through trades (the latter could also be viewed as encouraging, on second thought).

But was Herrera a flash-in-the-pan type? Would his wild, unconventional swing lead to a sophomore slump of a season that would put his future starting position into doubt?

Sure, his defense in center hasn’t been as good in Year Two. But you can easily stick him in a corner next year and receive more than adequate offensive production. To wit: in the last two seasons, only 12 major league outfielders (min. 1,000 plate appearances) have a better OBP than Herrera (.353).

More fun with numbers: Herrera has played exactly the same number of games (147) this year as he played all of last year. He’s been better this year.

• Jerad Eickhoff and Vince Velasquez took important steps forward. I remember back when the season started telling people that, given the volatility of pitching, particularly young and unproven pitching, that the 2016 season would be a success if two of the three first, full-year starters in the rotation were still in said rotation and performing well into September.

Nola didn’t make it. Eickhoff and Velasquez did. 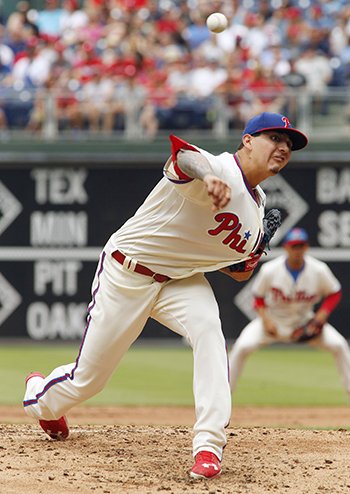 TOM MIHALEK/for PhillyVoice
While we can argue that Velasquez’s grade for 2016 is somewhat incomplete, since he did need a short stint on the DL in June and he was shut down two weeks ago, his season on the whole was definitely encouraging for his place as a big league pitcher moving forward. Velasquez’s strikeout rate (10.44 strikeouts-per-nine innings) ranks ninth in baseball among pitchers with at least 120 innings.

Sure only two pitchers above him on that list have a higher WHIP, but, baby steps. No one expected Velasquez to be a finished product when the 2016 season ended. In addition to featuring strikeout stuff that’ll obviously play at the big league level, Velasquez also threw 131 innings, an important progression for a pitcher who was limited to 88 2/3 innings in 2015 and 63 2/3 IP in 2014.

As for Eickhoff, he’s one of eight MLB starters 26-years-old or younger to make at least 30 starts this season. And among that group, only Madison Bumgarner (2.57) and Jake Odorizzi (3.73) have a lower ERA than Eickhoff (3.74).

• It may be an imperfect mix together on a 25-man roster, but are other useful pieces throughout said roster. Middle infielders Freddy Galvis and Cesar Hernandez have had successful seasons (even with Galvis’s league-worst OBP numbers and Hernandez’s occasional mental errors). If you hit 20 home runs and play Gold Glove-worthy defense at the most demanding position in the infield, as Galvis has, you’re doing something right. If you’re challenged to change your approach midseason and go on to hit .324/.411/.432 since said challenge, as Hernandez has, you’re responding well.

Galvis needs to walk more and strike out less for a middle infielder. Hernandez needs to make fewer outs on the bases. But each player surely has more value now than they did when the season began.

A bullpen that saw its best three arms depart since last year’s trade deadline (Ken Giles, Jonathan Papelbon, Jake Diekman) and brought a lot of uncertainty into the 2016 season, highlighted by the season’s first week, has emerged with at least three easy locks for the ’17 roster: Jeanmar Gomez, Hector Neris, and Edubray Ramos. The first two are probably running out of gas this month, but you can’t ignore the work they did for the majority of the season. Throw in hard-throwing left-hander Joely Rodriguez (who has looked good in his first week in the big leagues) and there’s definitely something to work with in the relief corps.

And the Phillies have depth at an important position: catcher. Cameron Rupp has been an above-average offensive big league catcher. A.J. Ellis has already proven to be a good enough receiver and teacher that there could be real interest in re-signing him as a free agent. And Jorge Alfaro’s bat isn’t far away from being in the big leagues. With Andrew Knapp also on the farm, using that depth in a trade this winter to fill a hole elsewhere on the roster  (re-sign Ellis, trade Rupp) wouldn’t be shocking.