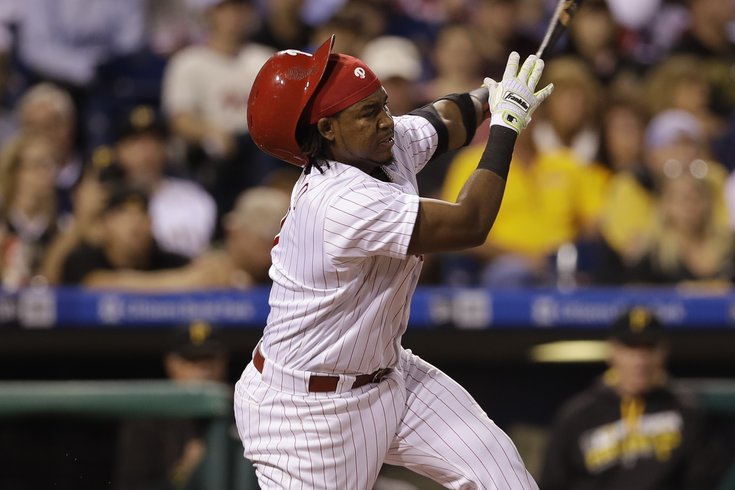 Maikel Franco can't seem to keep his helmet from flying off, and that's a problem according to Phillies manager Pete Mackanin.

Phillies third baseman Maikel Franco has been struggling recently. The 24-year-old hasn’t hit a home run since August 18 and in his 22 games since (86 at-bats), he has just four RBI and just five extra base hits (all doubles).

Last week, Franco missed five straight starts with a thumb injury (although he did pinch hit in the final two games) and appeared to be turning things around when he recorded a hit in four straight games upon his return. But after an 0-for-4 night on Thursday, he’s just a repeat performance away from seeing his average drop below .245, which would equal the lowest it’s been since June 29.

He’s been wildly inconsistent this year. And because manager Pete Mackanin doesn’t like what he’s seen from Franco at the plate this week, he decided to leave him out of Friday night’s lineup against the Miami Marlins.

Franco struck out in three of his four at-bats against the Pirates in their series finale a day earlier, and when you add to that his lack of production over the last month, that proved to be enough for the manager.

“Poor guy, he's scuffling,” Mackanin said prior to facing the Marlins. “He's swinging wild again. Every time he swings, his helmet falls off.”

It has nothing to do with his previously injured thumb — which seems like good news until you finish this sentence — and has everything to do with what’s between his ears. At least that’s how Mackanin views it.

“If you see him swing, he could make a roof fall off with the wind,” he said. “No [it’s not his thumb], he's caught up in something. He can't get out of it.”

When you’re in a rut like that, the only way out is by working through it. But when that fails, the next best option, according to Mackanin, is to step away for bit, regroup, and refocus on what to do at the plate.

“That's why I gave him a day off. Mentally, it's a drain on you. You try to figure it out; nothing is working. That last at-bat he had [Thursday night], he looked like he was trying to hit the ball out of the stadium. That would have been a perfect time to say, 'I'm just going to try to hit a single up the middle.' Just the time to work on it, in-game.”

Instead, Franco struck out for the third time in a row.

With him expected to be the focal point of the Phillies offense this season — he is tied for the team lead with 22 home runs — perhaps he’s just trying to do too much, as the cliche goes.

“Yeah, that's what it looks like to me,” Mackanin said. “I was talking to Mike Schmidt. I said, 'Schmitty, from that first year when you struck out all the time, what changed you, what made you a better hitter?' He said, 'I went to winter ball and I purposely tried not swinging as hard to see what would happen.' The first time he did, he hit a double off the wall. And he came to realize that he didn't have to swing as hard as he was swinging.

“And from that point on, it changed his whole career around. That's something that a player has to come to that understanding. Just take the macho out of hitting. If the line drive is only 90 miles an hour instead of 110 miles an hour, it's still a line drive.

“If you hit a line drive 90 miles an hour, you can hit a roof and make the roof fall off.”

But what if that helmet keeps falling off his head even after making an adjustment. Maybe he just needs a smaller size?

“I haven't said anything to him but that's a good point,” Mackanin joked.

Phillies prospect J.P. Crawford reportedly underwent “successful” arthroscopic surgery on his left knee. They expect to have their top prospect ready to go for the spring.

J.P. Crawford had arthroscopic surgery Wednesday on left knee to remove loose body. Will rest 4 weeks. Expected to be ready by spring.