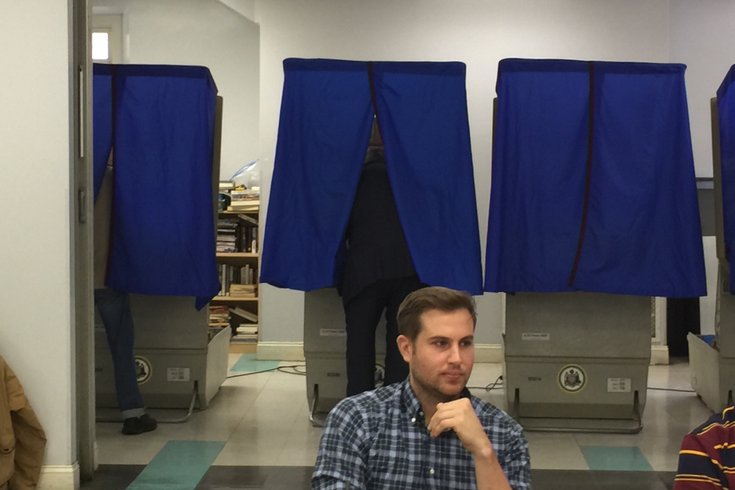 "I think people are excited that a candidate is coming and saying hello," Bailey said. "We're hitting a lot of polling places. A lot of these places haven't had any candidates come through. People are excited about that."

Yet, Bailey encountered low turnout at many of the polling places she visited, despite sunny skies and warm weather across the region.

"I'm not really sure what the reasoning is behind that," Bailey said. "They're disappointed that the turnout has been so low. There's no excuse."

Election contests with predictable outcomes could be playing a factor.

“We may be looking at a record-low turnout,” political science and law professor Brigid Harrison said early Tuesday.

An expected low turnout by voters sums up area political contests, all but perhaps the Montgomery County District Attorney contest, with its subtext of Bill Cosby and Pennsylvania Attorney General Kathleen Kane fueling the only real fire in the region.

The DA contest has become something of a “proxy contest” between the Republicans and Democrats, said Joseph R. Marbach, the president of Georgian Court University in Lakewood, N.J., and a former provost and professor of political science at La Salle University.

Opposing him is current First Assistant District Attorney Kevin Steele, the Democrat who has shouldered much of the case against Kane, a fellow Democrat accused of leaking secret grand jury information and then lying to cover it up.

Carrying through on the Kane case would fall to the winner of the race. And the statute of limitations on reconsidering the Cosby sexual assault allegations and bringing charges expires early next year.

Marbach said while Montgomery County is Republican-oriented, voters tend to be more independent, and the contest could serve as a predictive bellwether for the 2016 presidential contest.

“It is usually a low-attention contest, but there has been uncharacteristic spending and television ads here,” said Marbach, which could push voter numbers up.

He does not expect an upset in Philadelphia, where the mayoral and council races clearly favor Democrats due to a 7-to-1 registration advantage, though two council seats are set aside for candidates who are not Democrats.

He called Bailey “a sacrificial lamb” and “an unknown even within her party.”

He added she was outspent by her opponent, Jim Kenney, and will be outperformed in the get-out-the-vote effort by the Democratic machine.

“It is just too daunting,” he said.

Harrison said with few exceptions, such as in economically distressed Atlantic County, the 80 New Jersey assembly races are quiet contests with predictable outcomes, even though every member of the assembly is up for re-election.

The respected Rutgers-Eagleton poll recently found that 75 percent of Jersey voters have no idea the entire assembly is up for re-election, even though they top the ticket, said Harrison. The last time the assembly led tickets throughout the state was 1999, she said.

She also thinks the GOP presidential contest has sucked the oxygen out of local races for many voters.

Marbach said there is one dirty little secret to bye-year elections with no major contests to draw casual voters: Incumbent parties and candidates favor this sort of contest, which “preserves the status quo.”