Mad Rex: here's why you should go 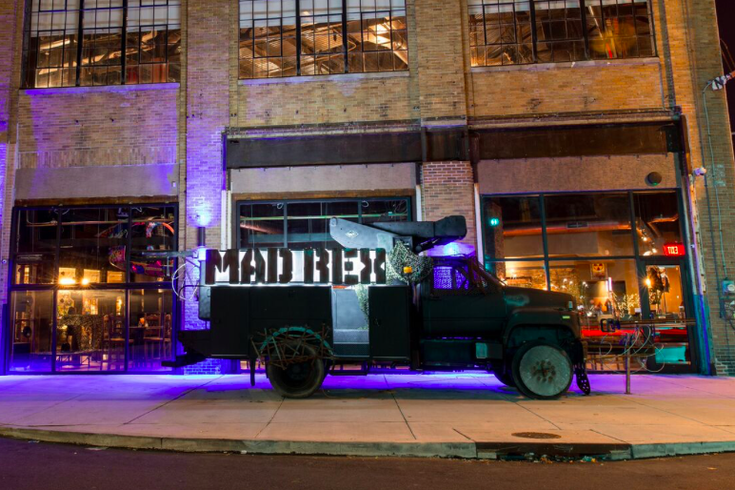 For the last year, music aficionados visiting The Fillmore, comedy fans at Punchline and bowlers fond of bartenders flipping bottles at Revolutions had to wonder what the empty, neighboring space in their complex had in store. And what did a graffiti-strewn helicopter and all those gas masks have to do with dining or drinking?

The answer comes tonight when Mad Rex — supposedly the world’s first post-Apocalyptic-themed restaurant and virtual-reality lounge — opens to the public. This will answer the question: “What if ‘Mad Max: Fury Road’ was shot in an industrial hair salon that served raw meat on a hot rock?”

Owned and created by Florida natives Michael Johnigean and Pavel Rathousky (a one-time butcher in Prague), Mad Rex is a cinematic, experiential thrill for those finding favor in “The Walking Dead” or the “Terminator” franchise. Take away the futuristic wasteland ultra-violence and any post-mortem odor, but keep the menacing, reclaimed tchotchkes, and the feel of survivalist anticipation and you’re there.

“Our goal is for our customers to imagine themselves in a post-Apocalyptic time where everyone is on there own, and survival is a daily accomplishment,” said Johnigea.

“There are no laws, no 911 and we are all left to protect ourselves, our family and our supplies. Our theme is a positive motivator for our customers.”

Once you get past the flame-shooting, machine gun-rigged truck outside the restaurant, there are happily grotesque totems to behold. An eerily-lit, smoke-puffing airplane ripping through the ceiling, the bejeweled gas masks, and the limp torsos atop booths in the seating area are but a few. There are tattered barrels, distressed oil drums and oxidized metal head gear strewn like death flotsam throughout the 230-person space.

If you grow weary of such nightmarish icons of destruction, patrons can hit up Mad Rex’s Virtual Reality (VR) Lounge, another first, according to its crowd-funding page. Once there, you can pick a private VR chair, and simulations of destruction (like crashing a plane or heading underwater) while hooked up to IV. That’s right. Mad Rex has figured out that you can’t see your booze with VR glasses on, so a “nurse” will pour your drink into the IV bag while you play. 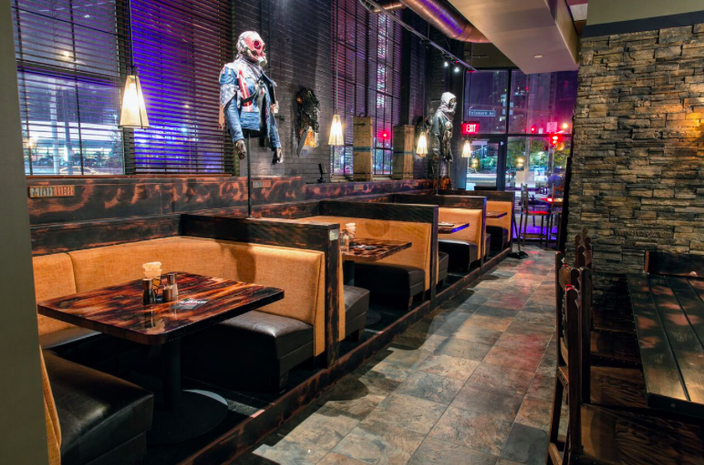 “Mad Rex is unlike any restaurant in the world,” said General Manager Nick Stefanou.

That the cocktail list includes drinks names such as “The Debacle” (vodka with an IPA float), “The Last Sunrise” (tequila with jalapeno simple syrup) and “Scorched Earth” (rye whiskey, Campari) is one thing. The dining option and the open “Survivors Kitchen” is yet another element to gawk at, one that offers a taste of what might be on the menu, post-Apocalypse.

There are, of course, cooked items on the menu from Mad Rex executive chef Peter Rule (late of Brigantessa and Fork) with its pastas and vegetarian offerings. But the raw deal from the scratch kitchen is the meat coming from Mad Rex’s neighbor, George L. Wells Meat Co.

Here they offer New York Strip, tuna steak or salmon, sliced and raw with a variety of sauces (there is sauce in the Apocalypse?!) Throw your protein onto a black lava rock slab heated to 500 degrees and start cooking and serving yourself. Yes, there are dining utensils, but I can’t help think that it might be more appropriate to gnaw on meat with your hands – even if such primal table manners would be messy when it came to the ice cream served in bowls made of pink Himalayan salt.

If you're planning for a zombie Apocalypse anytime soon, Max Rex will be the place you'll die for.