Mailbag: Are the Eagles' cornerbacks still a concern?

In our weekly Eagles chat on Thursday, there were a lot of questions that we could not get to in time or other questions we did answer but could use more color. And so, let's do a mailbag post to answer some of the overflow.

Question from Saul: If the Eagles never lost Carson Wentz, Jason Peters, Jordan Hicks, or Darren Sproles, how much do you think they’d be favored by against the Vikings? Or are they still underdogs?

Question from Oregon Eagle: I think one of the larger mismatches nobody is talking about is the Vikings’ wide receivers vs. the Eagles’ DBs. Yes, I know they mostly shut down Julio Jones, but Adam Thielen and Stefon Diggs are both fast, tall, and can climb the ladder. The Eagles’ DBs are on the smaller side.

I’m glad this question came up, just for the point on height, which I’ve also seen on Twitter. Thielen is listed in a lot of places at 6’3. I have no idea why, seeing as the Vikings themselves list him at 6’2, which might even be a stretch. At his pro day in 2013, Thielen measured in a 6’1 1/8. So unless he hit puberty at the age of 23, he’s nowhere near 6’3, and is probably listed generously at 6’2. Meanwhile, Diggs is 6’0.

Jalen Mills is 6’0. Ronald Darby is 5’11. Patrick Robinson is 5’11. Rasul Douglas is 6’2. Sidney Jones is 6’0. None of those guys are Mark McMillian. Thielen and Diggs are both good receivers capable of big plays, but it’s not like either of them are Mike Evans, in terms of physical stature.

The Eagles have faced four receivers this season that finished in the top eight in receiving. They were Julio Jones, Keenan Allen, Tyreek Hill, and Larry Fitzgerald. Here's what the Eagles did against those guys, in chronological order:

Allen is really the only player above who made any impact plays of that group above, and the Chargers threw incomplete to him more than they threw complete. On the whole, the Eagles have done a reasonable enough job on highly productive wide receivers.

Question from MattN: The return game (PR/KR) seems to have stalled a bit of late. Has there been execution issues with the blocking or has the other team just covered well? Need a special teams play this week.

One of the other writers (Domowitch?) pointed out recently that the Eagles attempted the fewest kick returns in the NFL this season, at 18. Domo (if that's who it was) said that the Eagles were content to take the ball at the 25 because they liked their chances of driving the field with Carson Wentz. Even when they have attempted returns, they haven't been very productive. Their long kick return on the season is 35 yards.

As for punt returns, Kenjon Barner had some trouble fielding punts late in the season. If I’m the Eagles, I don’t want him trying to be a hero. Just secure the catch and don’t create a major negative play.

I think that if the Eagles had a better returner, they might be more aggressive on returns. It’s a sneaky need area to fill this offseason.

Question from Pragmatic: I know you say that Vaitai is a backup swing tackle, but watching the NFL he WILL get good starter money from some team, no?

Maybe. The NFL certainly has a history of overpaying for players when they are desperate for hard-to-fill positions, like OT. The Eagles don’t have to worry about that until 2020 though.

Question from MFlick: Do you think Pat Shurmur will have a solid half time speech?

They’ll have to wake him up first. 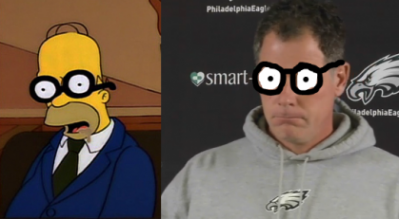 Ha, just kidding. That’s an old drawing I loved from the Chip days, when Shurmur didn’t do a whole lot as the offensive coordinator. But he’s obviously done a good enough job to parlay that into a head coaching job, assuming the reports of him going to the Giants are true. Never seemed like the type to give impassioned speeches though.

Question from AB: Are we ever going to have Dillon Gordon on the active roster?

Nope. They cut him. He’s not even on the practice squad anymore. The Chiefs signed him.

Question from Robb Gaylord: Is there a rookie who has hit the proverbial “rookie wall” this season?

Question from Kyle: Who is the “rah rah” guy in the locker room, as in, they seem very vocal? (Malcolm is soft spoken.)

I don’t know that I’d classify it as “rah rah,” but in terms of the most vocal guy in the local room, I’m going to give you a very surprising answer.

That dude is constantly joking around with pretty much every positional group on the team. Most guys stay near their own lockers, but Suds is all over the locker room, every day. He’s not in any kind of leadership role, if that’s what you mean, but the entire team seems to love that guy.