Mailbag: Are the Eagles overrated, and just beneficiaries of a weak schedule? 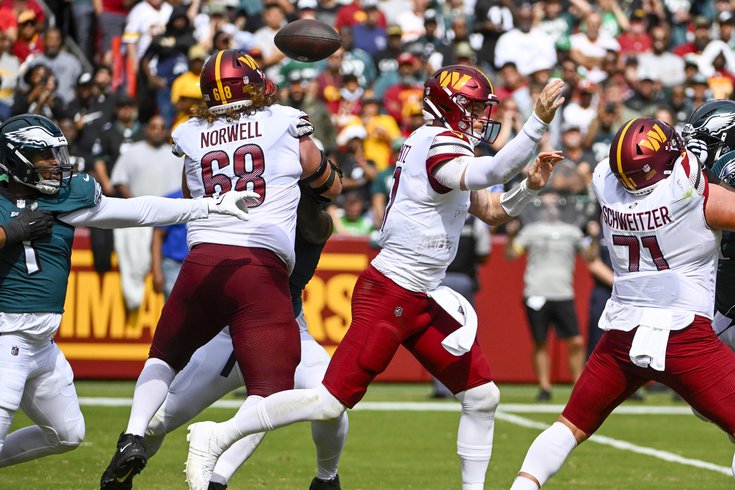 Are the Eagles merely feasting on sucky quarterbacks like Carson Wentz?

Question from aj brown: Hey Jimmy, what do you think of the Eagles' performance, despite the fact that they haven't played any top "contenders" yet? Are they overrated?

I think the Vikings will be in the playoffs this year, and in my opinion, the Jaguars are a talented team. Even the Lions have something going for them in that they're the No. 1 offense in the NFL. The Commanders are bad, obviously.

Certainly they haven't played any Super Bowl contenders yet. I do think it's encouraging that they have largely dominated their opponents this season, and aside from an early deficit against the Jags, the outcomes of Eagles games have rarely ever been in doubt. 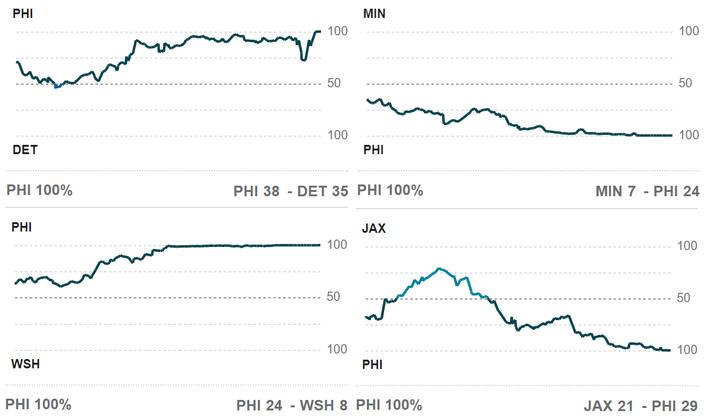 If you'll recall, there were some that tried to diminish what the Eagles were doing during the 2017 season, when they too were cruising against bad or average teams. It's not like they're Clemson, scheduling games against Furman and Louisiana Tech. They're playing who was put on their schedule, and they're dominating. That's all that they can control, and they've been impressive, regardless of their opponents.

Question from Dan: Since the Eagles are playing the Cardinals this week it got me thinking. The Cardinals started 7-0 last year and stumbled to a 4-6 finish and a quick playoff exit. Why will the Eagles be different?

Hmm, I can think of a bunch of reasons:

I could probably go on, but those are the big four.

Question from Hi Jimmy: Knowing what we know, plus remaining schedules, how many wins will it take for the Eagles to lock up the No. 1 seed?

Question from Alexander: As excited as I am for the hot start, I still need to see how the Eagles perform against Dallas’ D and a healthy Dak Prescott. They’ve been a thorn in their side in recent memory. How do you think the Eagles match up against them this year?

I thought the Eagles were the better team before the Cowboys started having some bad things go their way, like the loss of Tyron Smith, or Prescott. I think that on paper, they match up well. Obviously, they have to get it done on the field, and I think you're right to keep your excitement at a reasonable level until you see the Eagles beat Dallas.

Question from DB: The knock on TJ Edwards is his speed and athleticism. Is this something he can improve?

I think T.J. looks faster this year than he ever has, so, yes.

Question from Michael K: The Eagles have had a stretch of revenge games against former players/coaches, with one more this weekend. Rank these reverse revenge games that are coming up (and add any I might have missed!):

I don't think Hargrave or Pascal have any hard feelings toward the Steelers or Colts, respectively, but you can be certain that Bradberry and Gardner-Johnson will have added motivation against their former teams.

And yes, you missed the big one! A.J. Brown vs. Tennessee! He's been chirping back and forth with their fans since the Titans traded him. There's also Haason Reddick this Sunday against the Cardinals.

Question from Kempski Krew Lurker: I've seen plenty of people say they received Jay Ajayi flashbacks when they saw Trey Sermon's 2 runs on Sunday. Do you see him as a player who will continue to carve out a role, or will Boston Scott's return keep him on the practice squad?

Well, as you note, he only had 2 carries, and without looking it up to verify I think he had a pretty big hole on his longer run. I think that comparing him to what Ajayi did for the team in 2017 is a little premature, but Sermon may get some more opportunities on Sunday against the Cardinals, as Scott has been limited in practice this week.

Question from LostInChiTown: The hit on Jake Elliott was obviously a bad penalty, but is it a sign of some bad protection on kicks, especially after the block against the Vikings?

Love this question. In my opinion, yes. Here's the blocked kick against the Vikings. Noah Togiai is keeping his right foot (inside foot) planted to ensure that a rusher cannot get through the gap inside him. And then he's just kind of sticking his outside arm out, which isn't much of an impediment for a rusher coming around the edge.

I asked Togiai what corrections he felt needed to be made after that game. He said that he was doing what was taught, and that the coaching staff even noted that the guy who blocked the kick, Patrick Peterson, is one of the most productive kick blockers in the NFL. So from my view, it did not appear that they felt corrections were necessary.

Against the Jaguars, it was the same technique, different edge blocker. This time it was Jordan Davis.

The rusher didn't really get that close to blocking that kick, but I do think that opposing special teams coordinators feel like they can block kicks against this technique, and the Eagles need to adjust it.

Question from Matt: Brian Johnson is getting some national attention from guys like Peter Schrager. Any chance the Eagles lose both him and Shane Steichen if the Birds keep this up?

I think that if Steichen got a head coaching job (unlikely, in my opinion), then the Eagles could simply promote Johnson to offensive coordinator. So no, I don't think it's very likely they could lose both guys.

Question from Cutter: In your dumpster fire series, you predicted a drop-off from the Cowboys D, and we haven’t seen that. Are they that good or have they benefitted from playing NY and WAS the past two weeks?

Well hold on there a second, friend. I predicted a drop-off in their takeaway production. And that has been right! They have four so far, on pace for 17, when they had 34 a season ago.

That said, their defense has obviously been very good, as they haven't allowed 20 points yet in any game. Certainly it helps when you play the Giants and Commanders, but they also frustrated Tom Brady and Joe Burrow. I think they have a top 5 defense.

Question from Delco bartender: Over/under on old fashioneds consumed this weekend in Arizona - 3.5

That's a good line. I'm probably going out to dinner on Saturday night, so, I'll say over.

Question from cormeagles: Lord Jimmy, what's your anticipatory grade for the Cardinals food spread - B+?

The Cardinals and Texans are the two remaining teams I've never covered on the road, so I'm going in fresh this week. I don't know anything about their spread, and I don't want to know. That said, a general rule of thumb is, the better the stadium, the better the food spread, so it should be good.