Eytan Shander: Is pressure at an all-time high for Eagles, Phillies and Sixers? 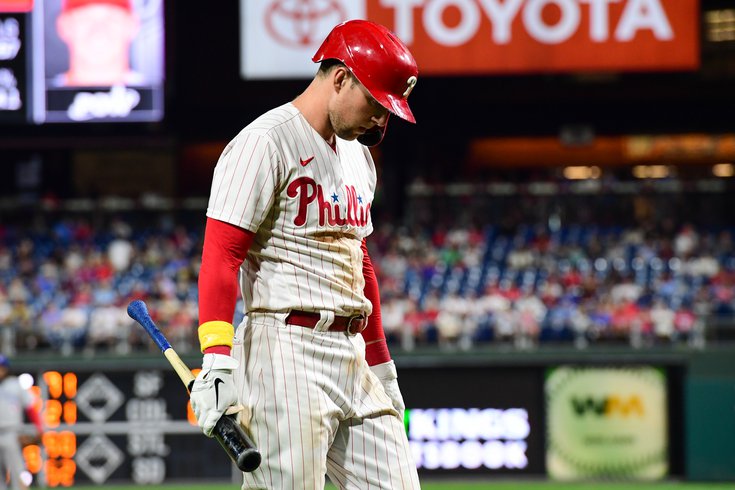 David Bowie wrote it, Vanilla Ice stole it, and now we are stealing it back.

Pressure. It’s a funny thing in Philadelphia and is something that shows its face in three different ways with three of our most prominent teams. The Phillies are set to embark on a playoff run, the Sixers are just getting underway in the preseason, and the Eagles are now (at least by record) the best team in the NFL.

That’s a lot to handle right now, are you ok?

This is an amazing time for us with beginnings and endings all measuring up to playoffs, and hopefully then some. I’ve retired from the “What are your expectations?” game, evolving into more of the “What can come from this?” angle. Let me tell you, it’s a lot.

The Philadelphia sports landscape is watching multiple stages of success act out in front of us. As any actor on stage would progress through a drama, we are watching multiple acts all play out simultaneously – which should be little problem with the amount of TVs you currently have in your “watch” room.

The Eagles just embarked on a long and grueling football season, smooth sailing with little issues. Despite the 4-0 start and how sharp the offense looks, questions still remain – not from me – about Jalen Hurts and Nick Sirianni. Nonsense as it may be, these hovering clouds of doubt still remain despite the majority of people recognizing what they have.

That’s just it, they have a young group of players who should be in the mix to start 4-0 every year. They should be talked about as a top group in the NFL – be it offense or defense – with the talent they have. Yet it still feels like every snap Hurts is playing for his job. It still feels like Sirianni is still trying to prove he belongs. Hell, I even have legit concerns that the defense by scheme will turn itself back into a pumpkin.

But this isn’t an Eagles column.

Doc Rivers has effectively kept his head above water as he continues to coach for his job. The Sixers through some savvy moves by Daryl Morey are now one of the deepest teams in the NBA. They chose to build around James Harden this year, not Joel Embiid, a move that could prove costly – especially with a new coach most likely on the horizon.

Guys like P.J. Tucker, D'Anthony Melton, and Danuel House should make immediate impacts in their respective roles. Philadelphia has a shot to come out of the East, to be one of the conference’s three best teams, and Embiid is still one of the game’s best.

But still, the amount of pressure on Rivers, Harden, Morey, and even Embiid keeps mounting by the preseason minute. This organization can say whatever it wants but this team was built this offseason with championship aspirations. You should also carry those with you. It’s enough to make a lesser man – or coach – crack.

But this isn’t a Sixers column.

Rob Thomson pulled off a “Mini-Doug” and stood up to all the pressure in the world.

We may be an Eagles town, but we are certainly “4-for-4” and more. We have a hierarchy of what we follow and love, for some it’s different than others, but we never neglect or even forget a team. Don’t let this magic run by the Eagles nor the start of the Sixers season do that with Thompson.

This was one of the most masterful managerial performances seen in the history of our city. The Phillies were dead with Joe Girardi. They were dead again without Bryce Harper. Even when they showed signs of life, the pressure started to mount. Talks about snapping an 11-year playoff drought – the longest active streak in all of baseball – began to take form.

Thomson was glue even when his best player went down. We praised the hell out of Doug Pederson’s ability to keep players focused. What Pederson did after Wentz went down was akin to Thomson’s rudder-like approach after the team lost Harper.

It was magnificent. It doesn’t matter if Thomson stood over Matt Vierling or Nick Maton after every at bat in practice, or let these kids do whatever the hell they wanted – the point is Thomson connected with his clubhouse and allowed veterans and young players alike to just be. Kyle Schwarber and Nick Castellanos came over with big money attached and neither took a back seat when called upon to replace Harper. It’s also hard to think that the team wasn’t fully aware of guys like J.T. Realmuto and Jean Segura ending long playoff droughts, making it each for the first time.

The Phillies played as hard for Rob Thomson as we’ve seen since Jimmy Rollins and Chase Utley do the same for Charlie Manuel. Nobody who coaches or manages to that level of success should be doing it while looking over their shoulder. Long term deals or not looking for anyone else, the point is that the Phillies found a gem in the manager spot and should remain.

We found out a bunch this year about some of our major sports teams, from Jalen Hurts being the guy moving forward to now Rob Thomson being one of the best managers to not win a World Series in Phillies history.

After two straight weeks of fading the Eagles – be it in the first half or the spread – we have to move to the other side, right? Not so much. Arizona is 6-0 ATS last six against the NFC East and has a knack for ending undefeated seasons. The Cards are 6-0 ATS from the fourth game or later against undefeated teams. Jalen Hurts is a problem for teams on the ground and so is Kyler Murray.

The Eagles are on a major run and deserve all the credit, I just think it’s hard to win 17 straight games in the NFL. This is an easy one to drop ahead of the Dallas game, as the Eagles are 0-4 ATS last four games before the Cowboys. Last thing to think about, they come in just 2-8 ATS as a non-division favorite of three or more points on the road. The spread is everything here.