Mailbag: Which scheduled free agents should the Eagles prioritize signing to long-term deals? 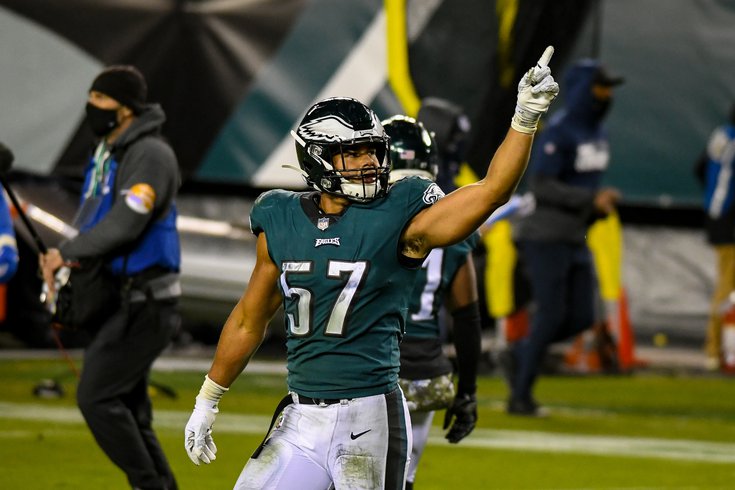 In our Eagles chat on Wednesday, there were a lot of questions that we could not get to in time or other questions we did answer but could use more color. And so, let's do a mailbag post to answer some of the overflow, as well as some commonly asked questions on Twitter and via email. This is Part II of a two-part mailbag. Part I here.

Question from byronevans: If you had to prioritize three pending free agents to resign, who would they be?

I'll go with T.J. Edwards, Javon Hargrave, and I guess I'll say Chauncey Gardner-Johnson as my third guy, but I wonder about his price tag.

• LB T.J. Edwards: The Eagles have to retain one of either Edwards or Kyzir White at linebacker, and in my opinion Edwards is the clear priority. He doesn't come off the field, he wears the "green dot" helmet, and he's producing (74 tackles, 2 sacks in 8 games). He is a home-grown player who went from UDFA to one of the most indispensable players on the team. Should White leave in free agency, ideally Nakobe Dean would be able to step into a bigger role.

• DT Javon Hargrave: Hargrave will be entering his age 30 season in 2023, but he's in his prime and he still has relatively low mileage (for a 30-year-old) as he'll only be entering his eighth NFL season. It's also worth noting that he hasn't played a crazy number of snaps in his seven NFL seasons:

From 2016 to 2021, Hargrave has played 3,550 snaps (as shown above). By comparison, Fletcher Cox played 4,854 snaps during that same span. The Eagles need to bring back one of either Hargrave or Cox, in my opinion, and there's little question which one of the two is the better player these days.

• S Chauncey Gardner-Johnson: And finally, there's the safety position. Ideally the Eagles can bring back the tandem of Gardner-Johnson and Marcus Epps, but it is imperative that they bring back at least one of them.

Gardner-Johnson can be a long-term impact player, but the Eagles have to be careful about how far they'll dip into the purse for him. If you'll recall, part of the reason the Saints traded Gardner-Johnson was because they could not agree on contract extension terms with him. Eight games into 2022 Gardner-Johnson leads the NFL in INTs. Do you think he might be looking for a bag? I do.

The short answer to who they should prioritize is "Chauncey Gardner-Johnson." The better answer is, "Both, but more specifically whichever of the two players has a more reasonable price tag, and that might be Epps."

Question from cormeagles: Lord Jimmy, I've seen some stuff about Hurts' rushing numbers being down, not just attempts (which isn't necessarily a bad thing), but YPC. However, he's run so many (successful) QB sneaks this year. Do you have a breakdown of attempts, yards & 1st downs on sneaks vs non-sneaks?

And yes, the Eagles have probably run more sneaks this year than they did a year ago. (Sorry, but I'm not firing up the game tape and searching for sneaks for a couple of hours.)

In 2021, Hurts averaged 5.6 yards per carry. Another difference aside from the sneaks and kneel downs is that he had 7 rushes of 20+ yards last season, and this year he only has one. I think that's a product of (a) the Eagles having comfortable leads in most games and (b) Hurts making sure he either slides or gets out of bounds in the wise interests of self preservation, thus turning down opportunities to gain more yards by breaking tackles. And then I also think we're seeing him grow as a quarterback who is going through his progressions more patiently instead of leaning on his running ability as a crutch.

But when I see Hurts as a runner, I don't think he looks slower or any less effective.

Question from SteadPA: If the 1 seed is locked up by Week 15 or 16, the Eagles can’t rest starters for the last 2-3 weeks of the season, in addition to their bye, right? Do you play the starters in the 1st half to keep them from getting rusty but pull them in the 2nd half to limit exposure to injuries?

I think there's some logic to that, yes, but I think the coaching staff also has to be careful about allowing players to lose some competitive edge in that scenario. It'll be interesting to see if the Eagles continue to win game after game every week and are in that position.

Question from Flip-a-del-phia: The Eagles' big games remaining: Dallas, Tennessee, NYG x2... any trap games you see on the horizon?

It could be easy to overlook a really bad Colts team next Sunday, but I think the Eagles' staff does a really good job of getting players to focus on the game right in front of them. I recall Jalen Hurts being angered that he wasn't being asked questions about the Cardinals earlier this season, which was the Eagles' matchup the week before the Cowboys game. So I think that they have bought in to Nick Sirianni's messaging on that front.

I also think that as the lone remaining undefeated team, the Eagles are going to get the best out of all of their opponents the rest of this season. They're almost going to be forced to play with an edge as long as they stay unbeaten.

Question from Jason A: Jimmy, there's been a lot of concern pertaining to the defense being able to stop the run after Jordan Davis went down, as evidenced in the Texans game. When Jim Schwartz was the coordinator, the Eagles were known for having a great run D, with largely the same defensive line that they have now. Jonathan Gannon talks about being "multiple" in terms of his defense. If that's the case, then why can't they use some of the concepts that made the previous regime successful, particularly when they're playing teams like the Texans, who do not pose a significant deep passing threat?

When Schwartz was the Eagles' defensive coordinator, he wanted to stop the run, first and foremost, make the opposing offenses one-dimensional, and then pin their ears back and get after the quarterback. When it all went to plan it was an identity that had success. When it didn't, the Eagles were susceptible to big plays down the field.

That is not the identity of this current Eagles defense. Jonathan Gannon doesn't like committing a lot of resources toward shutting down the run. His priority is stalling the opposing offense's passing game and capitalizing with turnovers when they make mistakes. In 2022, so far so good. With the exception of the their Week 1 matchup against the Detroit Lions, the Eagles' defense has not allowed more than 17 points in a game, and obviously they lead the NFL in takeaways (or at least they did heading into Week 10).

I think that changing the core of what you do week in and week out is easier said than done, and really, I wouldn't be in a hurry to change my core principles against impotent offenses.

Question Michael Danzinger: You saw the Dolphins this summer up close. They are now 7-0 in games Tua has started and finished. Are people sleeping on them as the best team in the AFC?

Ha, from my picks this week:

Browns at Dolphins (-3.5): I got a brief, but close look at both of these teams during training camp this year during Eagles joint practices, and the Dolphins are a way better football team.

That was one of the easiest calls of the year. The Eagles did whatever they wanted to the Browns in joint practices. The Dolphins, not so much.

And yes, I think they're maybe being slept on a bit. That team is loaded with speed. Tyreek Hill (4.29), Jaylen Waddle (4.37), Raheem Mostert (4.32), and Mike Gesicki (4.54) are all athletic beasts for players at their respective positions. Tua Tagovailoa is averaging 9.2 yards per attempt, best in the NFL. The next closest quarterback is Jalen Hurts, at 8.5. Tua is playing well, but the Dolphins' speed on offense has a lot to do with that. They have a legitimately scary offense. Their defense has good players, but they've been inconsistent.

I like the Chiefs' and Bills' Super Bowl chances a little better, but the Dolphins may be the No. 3 team in the AFC. The Bengals got to the Super Bowl last year with explosive playmakers, an accurate quarterback, and a bunch of holes elsewhere. Maybe Miami is that team this year?

Question from TRizzle: If the Commanders keep rattling off wins with Taylor Heinicke do you think they’ll immediately slot Carson Wentz back in when he’s healthy no matter what, or will there be a potential QB controversy?

He's scrappy and his teammates seem to rally around him, but he's not a good quarterback, and I don't think he has played well, at all. I'd be curious to get a look at rookie Sam Howell, but they won't do that until their season is basically over.

Question from Steve: It looks like Dan Snyder is making a move to sell the Commanders. While this may be a good move for that franchise, the players, the female employees, and society in general, wouldn't it be best for for the Eagles if he kept running that team into the ground as he's done for the past 20+ years?

Yes, but it's time. I think it could be fun if they become competent again. Eagles fans hate the Cowboys, of course, but isn't the rivalry more interesting when they're at least decent?