Mailbag: Would it make sense for Eagles to trade any of their first-round picks for a veteran player? 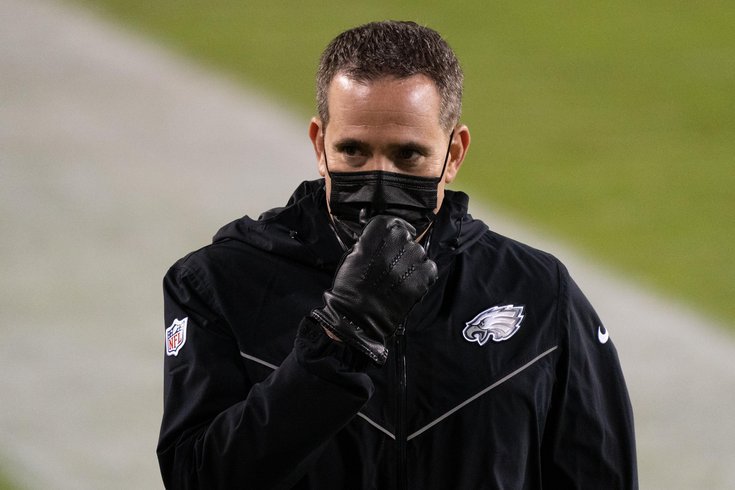 Question from Eagles fan 1966: The Eagles are far from a great QB away from being championship caliber. Wouldn’t it make the most sense to use the three first rounders filling the many holes on this team vs. sacrificing multiple picks for a QB?

Once you know you have your quarterback, building your roster around him and what he does well becomes substantially easier. So if you're in a position to get a quarterback you love, and you think he can be your guy for a decade, don't delay it. Just go get him.

Question from nceagles: I know they won't do this, but what players would you target if the Eagles were to trade their draft picks? Given the Eagles' poor drafting, do you think this model of roster building would be more effective?

That has sort of been the Rams' strategy in recent years. They haven't made a first-round pick since they took Jared Goff in 2016, and they currently don't own any first-round picks until 2024.

A list of recent players who have been traded for first-round picks:

The hit rate is higher in terms of landing a productive player if you trade for an established vet, however, you don't get the benefit of having that player on your roster on their rookie contract for four years, and in most cases, if you trade a first-round pick for a player, they will typically soon become one of the highest paid players at their position in the NFL if they aren't already.

I do think that approach would make sense for some teams, namely Super Bowl contenders. I do not think it would make sense for this current Eagles team, unless they're landing a franchise quarterback that they will have plenty of time to build around, or it's a young positional player they're sure will be around for the long haul.

As for specific player availability, it was already known that most of the players on the above list were available for trade before deals were finalized. I do not know of any star players being dangled for compensation that would require a first round pick as the trade deadline approaches. Maybe that will change in the next week.

Question from Jimmy James Butler: There are a lot of traits about Jalen Hurts I find intriguing but overall I don't think he's "it." When do you think you'll start evaluating college QB's — the guys from Ole Miss, UNC, Cincinnati, Pittsburgh, etc. Also, when looking at QB prospects how do you balance value between "NFL readiness" and "upside?"

During the season, we'll profile all the top quarterback prospects in our regular Saturday "5 prospects" series, but they'll be fairly basic. In a couple weeks, for example, we'll point out that Liberty is playing Ole Miss, and hey(!), that means Matt Corral vs. Malik Willis.

After the season is over, there will be a ton of time in January, February, March, and April to take deeper looks at each top quarterback prospect, so we'll probably wait until then if it appears that Hurts is not an ideal answer going forward. I'm with you that it's trending in that direction.

As for readiness vs. upside, I think we saw that in the 2021 draft, when the Niners were deciding between Mac Jones and Trey Lance. They chose upside over readiness. In that case, I'd have done the same (and didn't think it was close, honestly), but generally speaking, I think that if you believe a guy can step in right away and be OK right off the bat, that is maybe a checkmark in a player's favor, but I'm weighting the player's actual physical and mental traits over the perception of "NFL readiness." Immediate readiness would be sort of a secondary benefit for me.

Question from Bashkir: Is Darius Slay’s contract really so onerous that the Eagles couldn’t get something decent for him? I would think the demand for corners combined with the fact that he’s had a decent season would create a market.

We published our top three Eagles trade deadline candidates a few days ago, and some were confused why the players included were relatively younger guys, instead of aging vets like Fletcher Cox, Lane Johnson, Brandon Brooks, etc., and the reason why is because their contracts will be too hard to trade, like Slay's.

Question from GoBirds: What percentage chance do you give Hurts being benched for one of Gardner Minshew or Joe Flacco?

I guess I just keep coming back to the same counter question. What's the benefit of benching him for either one of those guys? What does it accomplish? Neither Flacco nor Minshew are taking you to the playoffs, and there is little value in seeing what Minshew can do. There is absolutely no value in seeing what Flacco can do.

Even if Hurts isn't the answer, he's still pretty clearly a player who is going to play in the NFL for a long time, even if that's just as a backup. The more experience you can get him this season, the more he'll improve, and the more value he'll (theoretically) have.

Question from Furkan Korkmaz Fan Club President: Hi Jimmy! I just got done listening to your podcast, something I always enjoy. So my question is on expectations for a first year coach with a poor roster. In Andy Reid's first year, he started off 2-4, just like the Eagles are now. Reid went on to win 3 more games, something Sirianni could realistically eclipse considering the garbage at the back end of the Eagles schedule. And Reid probably had more talent. Is it at all worthwhile to make this comparison, or was Reid showing more in his first season despite his W/L record?

Thanks! I'll respectfully — but strongly — disagree that the 1999 Eagles were more talented than the 2021 Eagles. The first year under Andy, the quarterback to start the season was Doug Pederson. If he wasn't the worst Week 1 starting quarterback in the NFL, I don't know who could have possibly been instead. The best pass rusher (after Hugh Douglass got hurt) was Mike Mamula. The receivers were Charles Johnson and Torrance Small. They did have some promising young players, like Brian Dawkins, Tra Thomas, Jeremiah Trotter, and Donovan McNabb, but those guys hadn't yet hit their primes.

There was no question that the team wasn't expected to be competitive that season, like, at all. In 2021, while Jeffrey Lurie said that it was a "retooling" year, the expectations to show something on the field are definitely higher.

I do see the parallels between Reid and Sirianni in that they were both first-time offensive minded head coaches who had very limited experience calling plays, but I think the circumstances are different.

Question from Brian: Hello Jimmy, love your work. I know Zach Ertz is a legend but I was hoping for the Howie press conference to include more questions about the drafts over the last several years. They missed on several high selections that were kind of obvious picks to make. Are reporters given an agenda about what they can ask during press conferences?

Yeah, his agreement to talk to the media was sort of framed like, "Howie will take your questions about the Ertz trade," which was sort of a way of saying that he wouldn't be talking otherwise if Ertz hadn't been dealt.

So it wasn't really open season in terms of asking hard questions about the state of the franchise, roster, etc. You just have to find creative ways to stray a little bit away from asking questions about Ertz himself, while also kinda/sorta asking about Ertz. For example, Howie got asked if the team would continue to sell more aging players, similar to Ertz, if the season continues its downward trend. That's not really an Ertz question, but it's framed as one.

Anyway, this wasn't the time to be like, "Yo bro, why'd you take Jalen Reagor instead of Justin Jefferson?" He wouldn't have answered it.

Question from jy: Thanks to the Ertz trade, do I have your permission to root for the Cardinals the rest of the way without being counted as a front runner?

You don't need my permission for anything, ha.  When I was a kid the Eagles (mostly) sucked, so I adopted an AFC side team, the Chiefs, because I liked using Christian Okoye in Tecmo Bowl. If you want to root for Ertz because you like him, you go right ahead, friend.