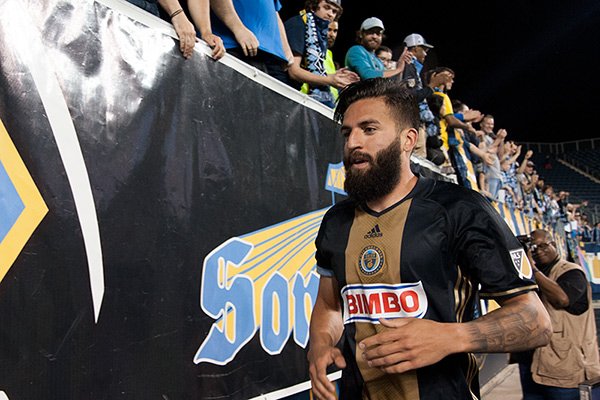 The funny thing about soccer is the thinness of the line that separates a bad result from a good result.

For 89 minutes on Friday night, it looked like the Philadelphia Union were destined for a drab draw on their home field. Then, a moment of magic from an unlikely source turned a potentially pitiful result into a great one.

Richie Marquez's finish looked more like a proper center forward's goal, rather than that of a center half. It turned one point into three and prevented the Union from ending up with a franchise-record fourth straight stalemate.

Instead, the Zolo's best defensive performance of the season made up for an underwhelming night of attacking, resulting in a 1-0 win that would make Peter Nowak and the 2011 Union smile.

The Union finished the game with three shots on goal from defenders, and one shot on goal from midfielders and forwards.

I felt like the Union played a conservative game tactically and didn't do enough to go for three points. With a merciless road trip coming up, this was a game where a draw really doesn't do much for anybody.

Jim Curtin was certainly hamstrung by a number of things that were out of his control. Vincent Nogueira's unavailability took some rhythm and fluidity out of the passing game. The injury to Fabinho forced a defensive sub. Ilsinho is still on the shelf.

But for a long time in the second half, Philly just wasn't doing anything convincing in the attacking third. Sebastien Le Toux blew a golden opportunity in front of the net. C.J. Sapong was pushed to the wing and moved from his best spot on the field (though he did create one nice look on goal).

In a way, it felt like the Union were playing with road tactics on their home field, especially with that defensive double pivot of Brian Carroll and Warren Creavalle.

I asked Jim Curtin about it after the game, with a question that didn't really come off the way I wanted.

Philly Voice: At times in the second half, it seemed a little conservative tactically, and with the subs. I know, personnel wise, Warren is a different type of 8, but we've (always) seen that Fabian Herbers substitution, and moving C.J. out wide. Is this a fair assessment, or are we off base?

Jim Curtin: "I mean, if you say it. It's your decision. If you say it was conservative, it was conservative. But we won 1-0, so we're happy with how we played. Again, Vincent took an injury (Thursday), so we were a little defensive minded. We're working towards, centrally, again I said it (before), getting two offensive guys, offensive minded guys on the field. We're not collectively 'there' yet as a team, to be able to sustain that. All three of my subs that went in, two were offensive and Fabinho had to come out because of an injury. So, what would you have done?"

Reading between the lines, I feel like there are two things going on with that quote:

1. Maybe Curtin doesn't feel like the shape will hold up if Roland Alberg or another attacking type of player comes in at the 8 spot. Creavalle is a much more defensive-minded midfielder, and has obviously played more at the 6 than the 8 this season. On the other hand, can Brian Carroll hold up for the final 20 minutes of the game if he's left in the holding role by himself?

I think Curtin is extremely reluctant to leave the comfort of the 4-2-3-1. Yes, the shape is working right now, and I'm a big subscriber to the theory of, "if it ain't broke, don't fix it". But you can adjust that formation in the second half without sacrificing too much defensive poise. 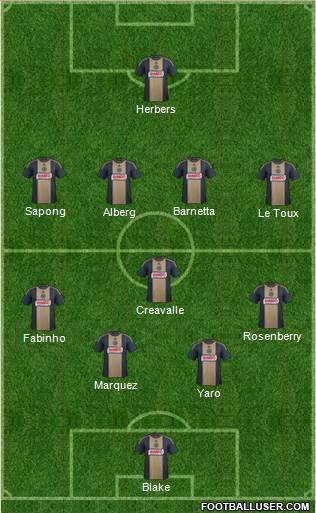 If you are married to that Fabian Herbers sub, and you insist on Sapong coming out wide, here's another way to do it (at right):

All you're really doing here is sliding into a 4-1-4-1. It's a double switch with Alberg and Herbers coming in for Pontius and Carroll. Creavalle sits in front of the back four, and you get that second, central, offensive-minded guy on the field that Curtin was talking about.

Also, imagine a healthy Edu roaming the midfield at the 6 spot.

2. "We're not collectively there yet as a team" – what does this mean? Are they not mentally mature enough to come out of the 4-2-3-1? Is Curtin pacing a young defense and keeping things tactically simple? Is the team not athletic or capable enough to play a more assertive formation? Does Curtin simply not trust his bench?

One thing to keep in mind is that this team really only has two true forwards on the depth chart. Playing a 4-4-2 to start the game just doesn't maximize the talent on this roster. But you can get Herbers on the field in the 65th minute while still keeping Sapong up top. 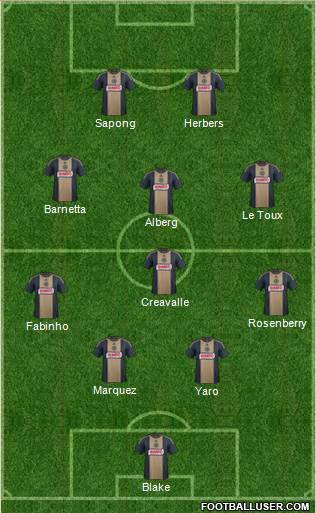 Try this (at right):

It's the same concept with the double switch. Instead, you're keeping Sapong up top, pulling Barnetta to the left, and putting Alberg in the middle.

One concern is whether or not Barnetta has the legs to move wide around the 70th minute. Maybe he does, maybe he doesn't. You can always throw Fernandes in there for him. Barnetta did play LW for a good chunk of his career.

You can also just say "screw it," and throw out the old Nowak empty bucket shape. That gets you two strikers AND two defensive mids on the field.

Sometimes I feel like they're too attached to this "two deep at every position" idea that Earnie Stewart has installed. You can play guys at other positions. Why not give Alberg a go on the left wing? That's not as much of a leap as, say, Nowak playing Gabriel Farfan at left back or John Hackworth playing Aaron Wheeler at center back.

At the end of the day, Curtin's team is near the top of the table and they've got the best defense in the Eastern Conference. They are playing well as a team, keeping the shape, and finding different ways to get points.

So what's my gripe?

I think you can take off the training wheels, add some tactical flexibility, and watch this team really begin to fly.

Great road win against a top team for the @PhilaUnion , again owe the 3 points to an outstanding save from Blake.

He had a nice effort from the left flank, though I'm still not a fan of seeing him in that spot. The biggest takeaway from that scenario is that it shows he maybe does have the ability to run at a defender and create his own shot.

He had a tough matchup against two good center backs who play in a no-nonsense, 'grind it out' type of system.

Classic Le Toux in this game, as he botches a golden chance in front of the net, only to come back and assist on the game-winning, stoppage time goal.

When the Union started to find more of the game about 20 minutes in, it was Barnetta who was the catalyst. The set piece service that went off the post should have been buried. He at least got off a few shot attempts, with one deflected just wide in the first half.

Tonight was the first time that Tranquillo Barnetta went the full 90 minutes for the Union.

A rather uneventful game for Pontius against his former team.

There were times in the first half where Luciano Acosta would sink a bit from his withdrawn forward position, which seemed to throw off the Union lines. Acosta, however, was his own worst enemy and sat on the ball inexplicably on a number of occasions. A more mature player may have carved open the Union from that same spot, and not mouthed off to his coach when subbed out.

After he got adjusted, Carroll played his typically steady game.

It's been a bit since we've seen Creavalle in the 8 spot, so naturally it took him a little bit to find his rhythm and spacing in front of Carroll. As he settled in, he played that rangy box-to-box game, compiling a nice assortment of interceptions, recoveries, and tackles.

You don't get Nogueira's shuttling ability in Creavalle, but he does play better defense and presses more effectively when finding himself further up the field. He is one of the more athletic guys on the field.

With Ilsinho injured, Fabinho inherited the mantle of Brazilian skill checks. There were at least two that are gif-worthy.

Fabi had a couple of awkward moments early, then really settled nicely into the game and did a good job on winger Patrick Nyarko, who I think is underrated by fans and media.

Fabinho had a nice flank run and shot on goal, and played a solid two-way game, even with that one flubbed, right-footed clearance that Yaro had to clean up.

When you score a game-winning goal and keep a clean sheet, you get an A.

This was, by far, Yaro's best game in a Union shirt. He was alert and up to the task, cleaning up mistakes and putting out fires all over the place.

It's hard to believe that he started this season with Bethlehem Steel.

So many CBs just launch this ball back at the box. Great work by Yaro to hit Le Toux on a dime for the cross #PHIvDC pic.twitter.com/tTfxaCY3Kp

A rather quiet game for Rosenberry, who was visibly frustrated with the inability to find his passing and crossing range in the first half.

He did well enough defensively and kept Lamar Neagle mostly in check.

I just don't know if he's going to be effective playing as a solo striker in a substitute role.

Credit to Gaddis, he's been steady whenever he's been called upon this year.

There's no point in bringing in Alberg for 6 minutes. I don't know if the guy has a crappy attitude, or if he's not doing well in training, or he can't play defense, or whatever. We need to see more of him on the field before this turns into another Kleberson or Roger Torres situation.

There were a couple of foul calls that maybe did not warrant a whistle, but he was fine otherwise.

You can't just say that two teams are “rivals,” but MLS likes to make things up. Rivalries are built up over time, with meaningful moments from meaningful matches. Philly and D.C. have had some chippy and entertaining games in the past, but just like the crackers in those “Cheez-It” commercials, we need time to let our rivalries mature.