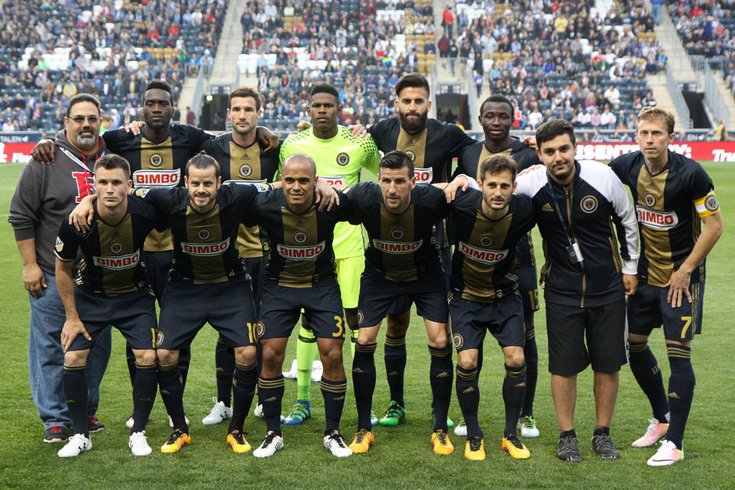 The Philadelphia Union are currently on a franchise record, eight-game unbeaten streak.

The Philadelphia Union are unbeaten in a franchise-record eight games and currently sit atop the Eastern Conference as we pause for the Copa America Centenario.

This is part two in our breakdown of why the team is playing well and turning the corner after four underwhelming seasons.

In part one, we talked about improved goalkeeping, production from the wings, and commitment to team defense.

We'll pick it up with number six.

I like Cristian Maidana as a player. Anybody who can get you 15 assists from the No. 10 position is worth a spot in your starting XI.

I think the Union technical staff liked Cristian Maidana as well, but he just wasn't the type of player they wanted in that spot. They had a better player in Tranquillo Barnetta ready to take over at the CAM.

The difference between Maidana and Barnetta is that Tranquillo scores goals contributes defensively, and plays a more balanced game. Whereas 'Chaco' would drift into the corners to find space, Barnetta can operate centrally and do a bit more in tight spaces in and around the box.

This was a bread and butter Chaco assist from 2015.

With the midfield stretched, Maidana has time and space to drop deep, pick up the ball and cycle it wide. He then immediately makes a little overlapping run to get into the corner, and plays a square pass for Vince Nogueira to bury. The defending is terrible.

Case in point, however, is that Chaco felt comfortable in open, counterattacking situations. He was never the player to square up, shake a defender, and play a through ball from zone 14.

Here's a Barnetta assist that shows the difference between the two players.

It's a great trailing run into the box, chip over the defender, and pass across the goalmouth. You'd rarely see Maidana get into that area going forward.

Beyond that, Barnetta played as a Bundesliga winger for nearly a decade. He wasn't always a No. 10 and he learned to defend during his time at Leverkusen and with the Swiss National Team.

Barnetta just has a more well-rounded game and still has enough juice left for a high-pressing system, which is what the Union wanted to do last season. They just didn't have the personnel to do it, and instead carved out a pseudo-identity as a counterattacking team.

At the end of the day, Barnetta and Maidana are both good players, but Barnetta's game is more suited to what the Union want to do.

The 2011 Union went to the playoffs on the strength of their home form. Only once did Peter Nowak's team lose at PPL Park that season, and it was at the hands of the defending champion Colorado Rapids.

This season, the team is 5-0-2 at home, which gives it 17 out of a possible 21 points. Mathematically, the Union have secured 81 percent of their available home points.

Those are really poor numbers.

For context, last season, out of 12 total playoff teams, one had fewer than nine wins at home. That was Portland, which got in only on the strength of its road performances. The Timbers hit a hot streak and won the entire thing, despite coming in as the third seed in the west.

The point is that you can get into the playoffs by taking care of business at home. In a league that lets more than 50 percent of its clubs into the postseason, the margin for error on the road is diminished if you hold serve at Talen Energy Stadium.

At 31 years old, it takes me four days to recover from a 60 minute or 70-minute weekend appearance in the Casa League.

The Union have been putting players through the grinder this year, and they've come out relatively unscathed. Even 34-year-old Brian Carroll was able to play 270 minutes in eight days beginning with that road swing to Orlando and Colorado.

Jim Curtin doesn't really believe in squad rotation. He's been notably averse to bringing in bench players on short turnaround and generally only changes up a couple of spots during busy weeks.

Here's what he said a few weeks back, before the team took off for that pre-Copa road trip.

"The term 'squad-rotation,' I think that’s the new buzz word and I think it starts in Europe where they have, we’ll just say, a lot more financial resources at their expense to build incredibly deep rosters. (laughs) It’s not as easy to rotate in our league, just because of the salary cap preventions. We do think we have a deep team; we’ll put the team that’s most fit and ready to go out there. We’re not…I don’t use the word 'rest', we’re not resting anybody. You can’t rest guys in game 12 or 13 of the season. So, we have some decisions to make. I think our fitness and our work has been put in. I don’t expect to see 10 new bodies out there and we’re just going to be fine. We have a good thing going on right now, we have guys believing, we have guys that physically feel good, and feel strong."

In fairness, Curtin's team is unbeaten in eight games, so something is working. They looked tired at the end of the Colorado game but got a stoppage time miracle from Carroll to get out of there with a point.

Either way, there's been more of an emphasis on sports science this season, with Garrison Draper running the department and having a bigger presence. The addition of Bill Knowles, who serves as "Director of Recondition and Athletic Development", is another step forward in this area.

There's also consistency in the retainment of Kevin Miller and Paul Rushing, who have served in their respective roles as "Strength and Conditioning Coach" and "Head Athletic Trainer" since day one of the Peter Nowak era. Miller is well-liked among the players, and Rushing has done some great work on the sidelines this season, most notably that instance where Chris Pontius had to be patched up before coming back into the NYC game and scoring the opening goal.

This is a team that used to practice at a public park.

It was such a joke, that the players couldn't keep themselves from commenting about the situation on social media.

Have him train at Chester Park? Come on bro 😂“@amobisays: Please Bradley, Stay overseas we look up to you.but if you do come to philly haha”

I'm not sure how many fans understood the exact nature of Union training from 2010 to 2014. The guys would basically drive to the stadium, park behind the locker rooms, then shove themselves into vans to take a separate drive to Chester Park. Sometimes random folks would just pull up at the park and watch practice. I remember a group of landscapers who parked their truck in the lot and just sat there enjoying an entire session while munching on Wawa.

Anyway, the addition of the training fields adjacent to the stadium has been obviously massive for the team. It's just a shame they had to take away parking space to get it done.

Of similar importance is the new training facility, which has a weight room, cafeteria, film room, offices, and pretty much everything else the players need.

The facility has really streamlined the typical "work day" for the players. Now they can grab a cup of coffee, watch TV, lounge in the cafe, and do all of the normal things that we do at our daily jobs.

At the very top, the addition of Earnie Stewart has been no less than monumental. He just brings a level of professionalism to this team that did not previously exist. Everybody is on the same page. There's no more interference from the front office. They've added double sessions and changed the way they train and travel.

In all aspects, this is finally starting to look like a proper organization.

10. They finally have an identity

Curtin has been adamant since his introductory press conference in the assertion that you cannot claim an identity or style until you start winning games.

On multiple occasions, we've asked him to describe the mentality and personality of this team, to which he generally deflects with the above response.

So, it was interesting when he came out on May 23rd and gave this opening statement during his weekly press conference.

"I’ve always believed that you start to get an assessment of your group, and an assessment of the rest of the teams in the league, after about a third of the games. I think that’s a good barometer. I believe we are starting to form an identity as a team that is very tough to break down defensively, and is very good at home."

Not really. I think it's telling. I think Curtin feels as though his team is finally good enough to deserve a label.

It's the same way Real Salt Lake established themselves a successful, 4-4-2 'diamond' team. They only made that system theirs when they won the MLS Cup and had a nice run in the CONCACAF Champion's League.

In the past, Philly has been some sort of counterattacking 4-2-3-1 team in a drawn-out transitional phase. Now, we can finally label them as a defensive-minded pressing squad.