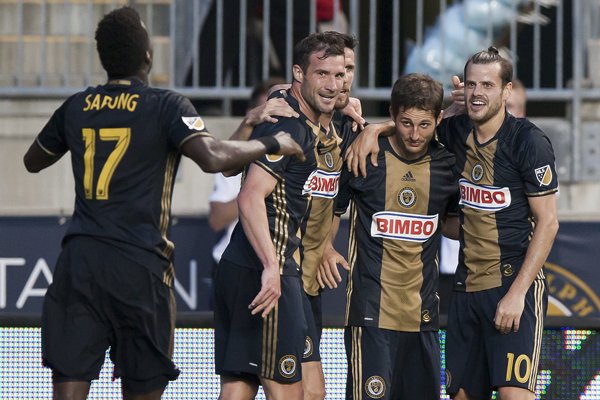 The Philadelphia Union are first place in the Eastern Conference, and it's not a fluke.

By now, we're past the idea that "the Union might actually be good this year!".

They're a rock-solid team.

Are they going to come out, score four goals, and whip your butt up and down the field?

No, but they've made it through 41 percent of the schedule at the top of the conference, so the sample size is certainly large enough to make some definitive judgments.

Jim Curtin's team took an eight-game unbeaten run into the Copa America break, which is a franchise record. The club hasn't lost since dropping a 2-1 result in Seattle back on April 16th. In fact, two of the three Union losses this season have come while playing through a red card ejection.

Even then, they've been competitive in those games, and have really only played two poor games overall, which I'd say are the opener against FC Dallas and the 1-0 stoppage time win against D.C. United.

It's true that the Eastern Conference is down this year. The Red Bulls got off to a terrible start. New York City has considerable flaws. Columbus and New England are incredibly disappointing thus far.

And the Union record could be better against the Western Conference, but that's not entirely important. The team blew a 1-0 home lead against 10-man San Jose and settled for a 2-2 draw with Los Angeles despite out-shooting the Galaxy 22 to 4. As it stands, the Union are 0-2-3 against the west and 6-1-2 against the east.

The west is better than the east (again) this season, but you can only beat the teams they put in front of you and Philly is taking care of business on this side of the country.

Here's why they've been successful:

Let's get the most obvious one out of the way.

The Union's goalkeeping situation is 1,000 percent improved this season, and that really isn't an exaggeration.

On the field, Andre Blake has probably been good enough for a +4 or +5 swing in total points and goal differential this season.

Remember this one against Orlando?

Everybody talked about Tranquillo Barnetta's free kick earning the Union three points, but Blake's stoppage-time save on Adrian Winter also preserved those three points. We're talking semantics here; Americans naturally focus on the exciting, goal-scoring side of things, but both events really impacted the scoresheet in the same way, didn't they?

That save is the difference between having 23 total points right now vs. 21 total points, and if you go through the early-season highlights, you can find a number of game-changing Andre Blake moments.

Off the field, there's no Rais Mbolhi madness. There's no injury issue (Blake was hurt last spring). There's no emergency loan for a NASL goalkeeper. They've cleaned up everything regarding the GK spot and the salary cap numbers make a ton of sense for the position. Blake is still a member of Generation Adidas, so he doesn't even hit against the cap. You're really just paying peanuts for backups Matt Jones and John McCarthy, who are both reliable and experienced guys.

The real question is, how long does Andre Blake remain in Philadelphia?

2. Production from the wings

One of the key reasons for the Union struggles in 2015 was the lack of production from Andrew Wenger and Sebastien Le Toux at left wing and right wing, respectively.

To his credit, Le Toux did perform better in the second half of the season, but failed to impact the scoresheet early on, and you really need contribution from these spots if you're going to stick to the 4-2-3-1 formation.

Those are dire numbers. In more than 2,100 combined minutes, your starting wingers contributed 1 goal and 3 assists through the first 14 games of last season. For comparison, Eric Ayuk played 453 minutes, mostly off the bench, and had better numbers than Wenger did last spring.

It's even crazier when you look at Pontius' contributions this year, then compare those stats to his last three, injury-plagued seasons at D.C. United.

Le Toux, meantime, has played fewer minutes but contributed more to the scoresheet. There's an irony to that, since the veteran isn't even supposed to be starting. Ilsinho really is the top guy on the RW depth chart, but injuries have limited him to 415 minutes, 9 appearances, 1 assist, 10 shots, and 2 shots on goal. Roland Alberg has barely seen the field as well and it looks like he's stuck behind Barnetta at the 10 spot.

To his credit, Andrew Wenger has been much better in Houston this season. It seems like he just needed a change of scenery.

The Union ask their wingers to do a lot of defensive work, which simply cannot be quantified in stats and numbers.

Pontius and Le Toux are both balanced, two-way players who help out defensively and protect the fullbacks who play behind them. There's a reason why Fabinho and Keegan Rosenberry are holding up well so far (in addition to being decent players themselves).

One of the reasons that Philly's defense has been so stingy this year is because everyone does it. Everybody defends. It's that collective mindset and commitment to the shape that helps a young backline, and it really stems from this new gameplan of pressing high and making opponents uncomfortable.

Think of it this way; the further up the field you defend, the further away you are from your own goal.

Well, think of it in a more abstract way. Are you required to defend only in your own half of the field?

It's the same in soccer. You can defend anywhere on the field. You can trap in the corners. You can bring secondary pressure from a winger, or a roaming CAM, or a box-to-box 8.

Efforts like this high press against Columbus, who love to play the ball out of the back, exemplify the hivemind-style defensive mentality we've seen from the Union in 2016.

Through 14 games, all three Union rookies are contributing.

Keegan Rosenberry is the only rookie to play every minute this season. Josh Yaro earned himself a starting spot before suffering a shoulder injury. Fabian Herbers got his first goal in last week's win.

The Union nailed the draft, although I still think Rosenberry would have been available at #6, which would have allowed the Union to grab Brandon Vincent at #3.

But that's history, and it looks like Herbers can be a solid player in this league.

Curtin had a good quote last week about whether or not the rookies were "progressing faster" than he thought they were. He answered with something along the lines of, "no, I think they're good players", and he's correct. All three were "MLS ready" when coming out of the draft, and that's not often the case these days.

Think about Union rookies over the past couple of seasons. Dzenan Catic was a second round pick and didn't pan out. Andre Blake didn't even get on the field during his rookie year (huge mistake). Pedro Ribeiro was lost in the expansion draft. Don Anding and Stephen Okai didn't play.

The Union committed to the draft this year, traded up for the No. 2 spot, and ended up with three out of the top six picks.

So far, it looks like they've knocked it out of the park.

Late Night Stat: Keegan Rosenberry is the only @MLS rookie to have played every minute this season (1170 mins). pic.twitter.com/Z2PUJbv5vx

5. Letting people do their jobs

The improvement for this year really began last fall, when Chris Albright started to clean up the Union's salary cap situation. He dumped Steven Vitoria, Rais Mbolhi, and Carlos Valdes and cleared up about a million dollars in cap space just by jettisoning three players.

The additions of Barnetta and Alberg and Ilsinho were done in smart fashion, with salaries that fit nicely into the restructured cap. The salary breakdown of the defense is especially solid, with only three out of five players even hitting the cap at all. The Union is paying just $267,000 against the cap for five of eleven starters. They also got C.J. Sapong to sign a contract extension before the season, locking up their first-choice striker at a bargain price.

On the technical staff side, B.J. Callaghan has added a lot to the set piece planning. They are actually spending time in this area and seeing results from it.

The Union would have never even attempted something like this before 2016:

Elsewhere, Oka Nikolov has replaced Paulo Grilo, a coach who was liked by the goalkeepers but was not brought in by Curtin. He came to town with Mbolhi, then left when his one-year contract expired. Mike Sorber is doing his job. Garrison Draper is contributing. The entire process is more streamlined and there are more people on the payroll.

At the very top, Earnie Stewart is certainly putting his mark on this team, but we'll save that for part two.