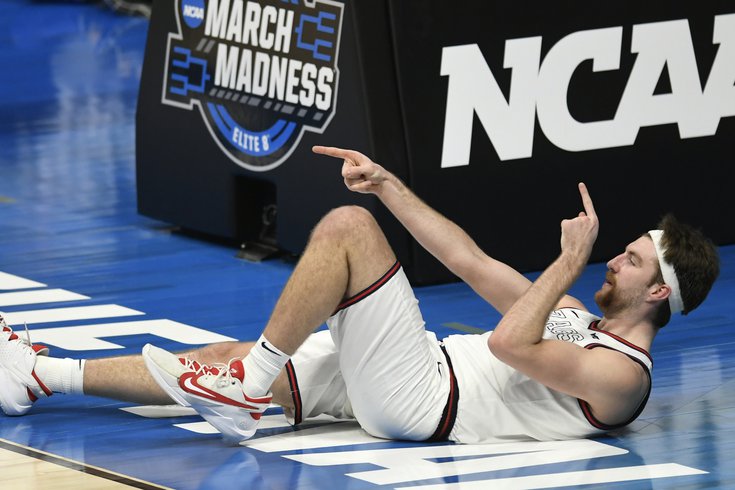 Gonzaga Bulldogs forward Drew Timme reacts to being fouled during the Sweet 16 against Creighton.

The most important piece of advice I can give you in these columns isn’t found in the lines or totals. You should know these bets are living, breathing organisms that are never dead until the final whistle or horn sounds. I received a DM from someone this weekend who told me he read my article last week and took 'Cuse on the money line. Again, you are never truly locked into anything, especially if you placed a bet pre-game.

We have been given the gift of live betting, so first and foremost you can hedge live in-game. We also have the ability to see how lines move, as well as how much of the public jumps on a game. At the time I wrote it, 'Cuse was not advertised as such a large public favorite. Once that news becomes available, you should always be wary of such a pro-public choice. Hedge, live bet, and be aware of how lines and money moves!

That being said, there are still two more games before we arrive at the Final Four, so let's take a look at who we like in each matchup, with the odds coming courtesy of Pa.Unibet.com.

Please lay the points with the Zags. A good rule of thumb for this team has been any line that’s single digits is a Zags line, outside of maybe Baylor. Let’s get the easy stuff out of the way first, this has nothing to do with USC nor is it a reflection on how good of a team they are this season. Drew Timme is one of the toughest matchups in all of college, combined with Jalen Suggs and the rest of the talent Mark Few rolls out each night.

They are playing a different type of game than everyone else this year, becoming more evident as they get deeper in the tournament. They simply aren’t slowing down either. The tempo and talent are too much for USC. The Zags are also used to ridiculously high numbers to cover, beating up on bad teams for the majority of the season. It’s a big reason why their ATS record is marginally above .500 as opposed to their undefeated record. Love the Zags with the points.

You may want to tap into the total as well, taking the over (currently at 153) before the game starts. No matter what the Zags do, USC will want to run. There’s a good shot that even in a slower first half, things will significantly pick up in the second half, especially as the Zags begin to pull away from the Trojans.

Another chalk pick, I know. How boring, right? The good news is winners all look the same in the end, no matter how “chalky” they appear. The reality is we got burned by the public jumping all over Syracuse last week, so let’s avoid the same mistake Tuesday night.

The public is all over UCLA like it’s the latest Marvel movie, which is a shame because now any play on the Bruins is out. At the time I am writing this on Monday evening, the Wolverines are getting very little public action and money at minus-7. In fact, the Bruins are getting nearly two-thirds of the public bets, accounting for over three-quarters of the total money. That’s all on UCLA plus-7, and with all of that money the line still hasn’t budged.

The other play in this game would be an ambitious double-play in the first half. I personally think both teams are going to cool off at the start, allowing for a nice first half under 63.5. Both UCLA and UM are expected to put up points, so it’s a nice contrarian play to start the game. The double-play comes in taking the under 29.5 1st half points for UCLA. I know that number is low, but so is 63.5 for the entire half. There’s just no way UCLA is up and that first half stays under.

I would personally jump in at minus-7 for Michigan now, but if you really want to wait, see if UCLA can come out and hit a couple of shots. If the Bruins can come out strong it might dip the line by a couple of points and you can simply bet it in game. Remember, these lines are living and breathing — and always changing.