Best bets for the Sweet 16, plus a can't miss two-game teaser 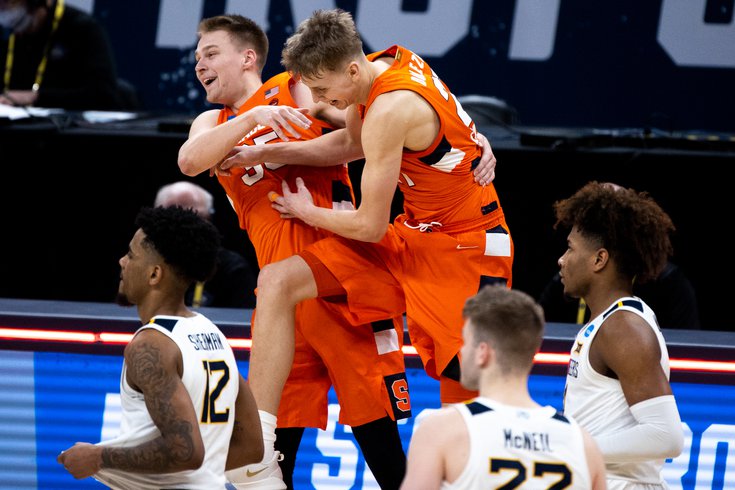 Can Syracuse's defense slow down Houston in the Sweet 16?

The worst possible thing you can do ahead of the Sweet 16 is think you’ve figured out the tournament — at least from a betting standpoint. We saw first-half unders prosper in the first couple of days only to be crushed by high scoring efforts on Monday. Today it’s all about the value, specifically finding where the best value meets the most realistic outcomes, all netting you big dollars.

I also have a teaser with two totals based on some trends falling back to normal, and one specific team who should score a lot of points. Remember, I’m giving you a couple of strong upset plays on the money line, so feel free to chicken out and take the points (all odds are via Pa.Unibet.com).

So without further ado, here are your best bets for the Sweet 16:

Ever feel like you might be on to something only to find out that everyone else is on that something? That’s how I feel about 'Cuse. It just makes too much sense so there’s initial pause that I might have missed something. Seeing a ton of public interest on Syracuse doesn’t help, but I’m still confident this 2-3 zone will be a problem for Houston.

The Cougars are a little banged up and like to play lower scoring and tempo games. Jim Boeheim refuses to take his team out of the zone, increasing the intensity the better it works. They also score an uncomfortable amount of points for Houston. Kelvin Sampson will only be able to rely on his talent so far, and the inevitable undressing of his team comes alive Saturday night.

Another top seed goes down this weekend, the one we all thought would be the first to go down. Illinois decided to check out way earlier than a lot of us expected, but that doesn’t dilute how overrated and outmatched Michigan is. The Wolverines are still missing their most consistent three-point shooter in Isaiah Livers. But there’s one key stat that seems to crossover multiple sports as a determining factor, one that shines way too bright on FSU to ignore, turnovers.

Michigan doesn’t turn their opponents over, really much at all. Meanwhile the Noles are one of the better teams – definitely remaining in the tournament – when it comes to turning over their opponents. Tough to build a lead when you keep throwing it away.

The totals have been a little low-scoring and a little wacky, but at least we are starting to get a handle on a couple of teams. We don’t need to have the pulse on every squad this weekend to make this one work, in fact we will just use the two extremes and tease them. We are going to take one low total and another high total and tease them up and down, respectively.

Not even Sister Jean can provide enough firepower to boost her Loyola-Chicago squad’s ability to score points. We should take full advantage of an amazing trend regarding the Ramblers. In games with totals closing at 125, the under is 10-1 over the last 11 for Loyola-Chicago. The total sits at 124.5 so just going under would be enough, but we are all about making things easier here.

Go ahead and punch that U 124.5 -110 on your Unibet ticket then scroll down two games to Oral Roberts vs. Arkansas. This is where we take advantage of another game with lofty expectations, just in the opposite direction. Oral Roberts scores points and loves to run.

The great news for us is the Razorbacks have no problem matching tempo. Oral Roberts is one of the more efficient three-point shooting teams remaining in Indy. They may get run out of the gym, but they’ll go down dropping 80.

The second play is O 159 -108 in this game, making for a pretty nice payout with the teaser. We moved both totals by five points with a return of +130. The Loyola-Chicago total is now up to 130.5, where we are under, and the Oral Roberts total dropped to 154, where we are over.