Three reasons why Villanova can reach the Final Four 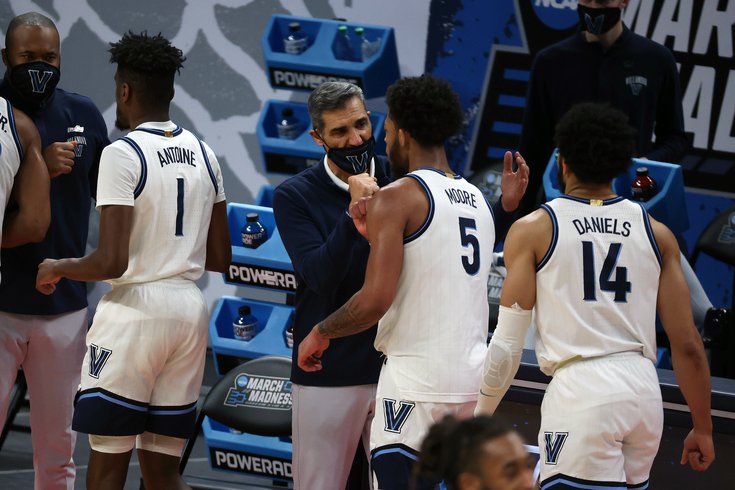 Jay Wright and the Villanova Wildcats are looking for their third national championship this year in the last five NCAA Tournaments.

The Wildcats finished the regular season with five straight losses away from the friendly confines of the Main Line, including a loss to Georgetown in the Big East Tournament quarterfinals earlier this month.

Villanova's best player, senior point guard Collin Gillespie, was also out for the season after tearing his MCL in the team's final home game against Creighton. Things didn't look good for the Wildcats heading into March Madness.

Without the co-Big East Player of the Year healthy and having played poorly down the stretch, the Big East regular season champions became a trendy pick to get upset in the first round of the tournament. But after pushing past Winthrop and blowing out North Texas, Villanova will make its 19th Sweet 16 appearance in school history and third in the last five tournaments this weekend.

The 5th-seeded Wildcats, however, will now have the pleasure of facing the top-seeded Baylor Bears, who have looked as strong as any team through the first two rounds.

There's no question that Villanova will enter Saturday evening's showdown in Indianapolis as the underdog. The Bears are heavy favorites, making Nova seven-point underdogs, via Pa.Unibet.

Baylor has lost only twice this season and won the Big 12 regular season title by three games in a conference that sent seven single-digit-seeded teams to the NCAA Tournament.

Hinkle Fieldhouse, the site of Saturday's Sweet 16 matchup, has not been a pleasant spot for Villanova to play at in recent memory. The Wildcats have lost four of their last five games played against their Big East rival Butler on the latter's home floor, including a double-digit road loss at the hands of the Bulldogs last month.

But in recent memory, the Sweet 16 has served as a stepping stone to greener pastures for the Wildcats. In each of their last three Sweet 16 appearances (2009, 2016 and 2018), Villanova has come out of its respective region and advanced to the Final Four. The two most recent appearances eventually led to the Wildcats cutting down the nets and winning the national title.

There are more reasons than just recent history as for why Villanova can get to its 7th Final Four and win its 4th national championship in school history this year. Let's dig into a few of those factors:

If you're a college basketball fan, you're likely very familiar with Ken Pomeroy's college basketball rankings. It's a data system that measures each team's overall efficiency, as well as offensive and defensive efficiency. It's a great tool to use when trying to figure out who could make a deep tournament run.

Villanova currently ranks 11th in overall efficiency and 6th in offensive efficiency. History says their elite offense is good enough to get to the Final Four and win another national championship.

Despite being a high-scoring team, Villanova's offense doesn't try to run opponents out of the game by playing at an extremely-fast pace. Instead, the Wildcats love to play at a methodical tempo in the halfcourt.

When Villanova's offense is at its best, the ball movement is a work of art. Guys are passing up good shots for great shots. It forces opposing defenses to have to stretch the floor, thus creating open lanes for the Wildcats to attack the basket. And if a shot at the rim isn't there, Villanova will either get to the free throw line or kick it out to wide-open guys on the perimeter to knock down threes.

Given how important ball movement is to its success, Villanova's offense is totally team-oriented. If only one or two guys carry the scoring load, the offense struggles. But when there's a balanced scoring attack and everyone is getting involved, it's all but unstoppable.

Most importantly, Villanova's offense doesn't beat itself. The Wildcats do not make many mistakes or commit lots of turnovers.

Villanova's 2016 and 2018 national championships, especially the former, were won behind great defense.

The 2018 national title team's defense got better as the season went along, eventually serving as the perfect compliment to their juggernaut offense. And that might be happening with this year's squad, which has played well on the defensive end in its first two tournament games. That will have to continue if the 'Cats want to keep dancing.

Whether you trust the analytics or the eye-test will likely determine how you feel about Villanova's defense. But one thing is for sure; the Wildcats have a championship-caliber offense.

A Balanced and Deep Team

When Gillespie went down with his season-ending knee injury, it felt like a fatal blow to Villanova's hopes of winning in March. Who would step up in place of the senior point guard?

Fortunately, the Wildcats had another star on deck in Jeremiah Robinson-Earl, who shared Big East Player of the Year honors with Gillespie. The sophomore big man has led the Wildcats this year in scoring, rebounding, steals, blocks and field goal percentage, giving Villanova a little bit of everything on both ends of the floor.

Villanova also had another dependable scorer and ball-handler in sophomore guard Justin Moore, who has the ability to create opportunities for himself offensively.

But more would be needed from others if Villanova was to make a deep tournament run. Other starters and role players would have to step up to fill the void, and through two tournament games, the Wildcats have been getting just that since going deeper into their bench and expanding the rotation.

Senior forward Jermaine Samuels has assumed the leadership mantle left in Gillespie's absence. Junior guard Caleb Daniels, who at times has been a streaky shooter this season, has been more consistent of late with his scoring.

Junior forward Brandon Slater has emerged as the Wildcats' de facto 3-and-D guy due to his ability to hit threes and defend at a high level. Fellow junior forward Cole Swider is the prototypical catch-and-shoot swingman who can stretch the floor by knocking down open shots.

One of the brightest revelations has been the emergence of Chris Arcidiacono, the younger brother of former Villanova star and current Chicago Bulls' guard Ryan Arcidiacono. After not seeing much action during the regular season, the sophomore guard has taken Gillespie's place in the starting lineup and has brought much of the same energy and hustle to the floor that we saw from his older brother during his playing days with the Wildcats.

Two other players who continue to earn more minutes off the bench are Bryan Antoine and Eric Dixon. The sophomore guard Antoine, who has missed much of his first two seasons at Villanova due to injuries, has given the Wildcats an offensive spark of late with his shooting. Meanwhile, the redshirt freshman Dixon has been able to provide Villanova with some rebounding and interior defense, which is especially helpful when facing opponents with size.

This team's depth might just be finding its groove and clicking on all cylinders at the right time. This group appears to be very confident right now, which is what this team lacked after Gillespie got hurt and losses piled up down the stretch of the regular season.

Let's also not forget that the Wildcats were picked No. 3 in the AP's Top 25 preseason poll this year, behind only Baylor and Gonzaga. This team was expected by most at the start of the season to be playing basketball deep into March.

Villanova has all the ingredients needed to win a championship, but it will be interesting to see how these pieces are utilized against the Bears and other potential opponents in the tournament.

Like in any postseason setting, having experience can only help, and Villanova's got some on its side.

Not having Gillespie's experience on the floor this tournament certainly hurts. He was a key role player off the bench during his freshman year when Villanova cut down the nets in 2018. But Samuels, who had a similar role to Gillespie on the 2018 national title team, brings that much-needed championship experience to this year's squad.

Otherwise, the current Villanova roster does not consist of much NCAA Tournament experience.

But when talking about tournament experience, the conversation at Villanova starts and ends with the man we have yet to mention in this entire story: Jay Wright.

Now in his 20th season as the Wildcats' head coach, Wright is leading Villanova to its 7th Sweet 16 appearance since 2005. The school has made 15 tournament appearances since that same year. Wright also sports an impressive 3-1 record in Elite Eight games.

None of the remaining head coaches in this year's tournament can match Wright's two rings, and only Syracuse's Jim Boeheim has Wright clearly beat when it comes to overall experience and success in March.

In a tournament that did not include the likes of Mike Krzyzewski and John Calipari, and one that saw coaches like Roy Williams, Tom Izzo and Bill Self fail to advance past the first weekend, Wright is all of a sudden one of the elder tournament statesmen remaining in March. That's a huge advantage for Villanova.

Wright has been through the battles of the tournament. He knows as well as anyone how important it is to zone out the surrounding distractions when you have multiple days or only 24 hours to prepare for an opponent. The bubble setup in Indianapolis, which involves no travel and limited fans, actually makes Wright's job of keeping his players focused easier.

Wright will have his Wildcats ready to execute their gameplan at a high level. And that alone should keep Baylor, as well as other teams, worried about a potential matchup against Villanova in this tournament.