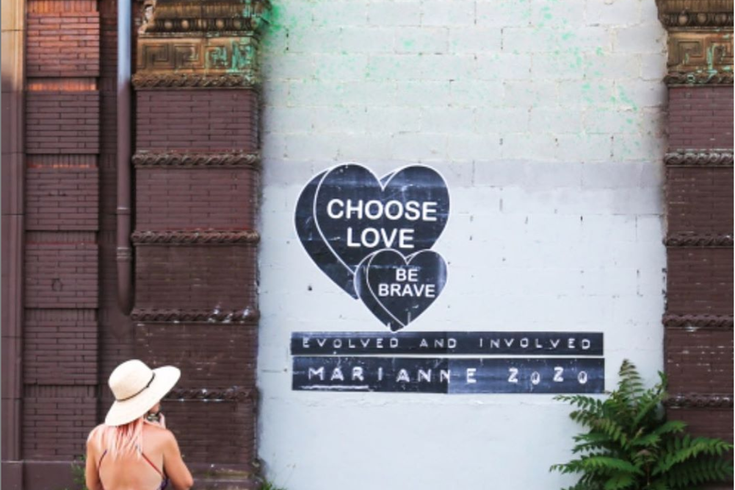 Williamson floated more than a few off-center ideas, including saying she would call New Zealand (?) as soon as she became President, but one thing that stuck with some voters was her call for voters to "choose love" over current president Donald Trump.

MORE: Tröegs named one of the 20 best breweries in U.S. by brewers association

One of those voters is Philadelphia and Los Angeles-based artist Amberella, a University of the Arts grad who's known for her mixed media street art.

Amberella put up a new piece in Kensington, at Germantown Avenue and 4th Street, on Friday after the debate in support of Williamson, with her "Choose Love" slogan inside a heart and the words "Evolved and involved. Marianne 2020" underneath.

She also shared a photo of the piece on her Instagram with her 412,000 followers, with this caption:

"Could this be any cooler? Philadelphia street artist Amberella did her thing. I’m honored."

MORE: 'It's Always Sunny in Philadelphia' cast is taking over Dunder Mifflin

Her 15 minutes of relevance in this presidential race are probably already over, but it's neat that Williamson used part of the day after her memorable performance to highlight Philly's ever-rewarding art scene.