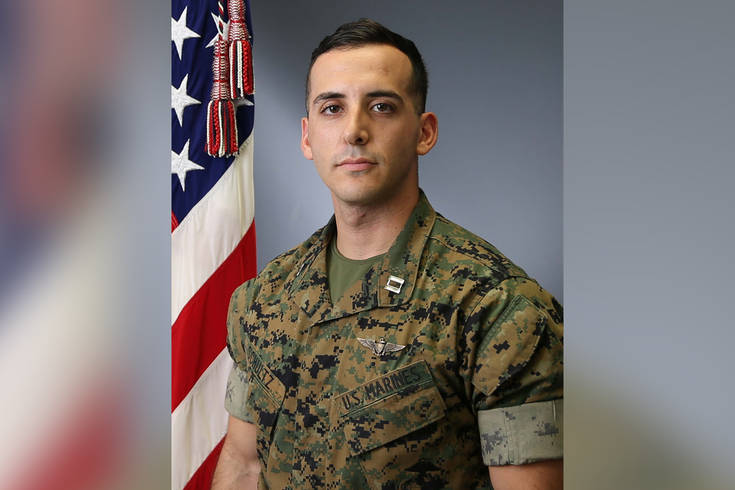 U.S. Marines Capt. Samuel A. Schultz, 28, of Huntington Valley. Schultz was killed in a helicopter crash Tuesday along with three other marines.

Four Marines, including one from the Philadelphia suburbs, were killed in a helicopter crash during a training mission Tuesday afternoon, according to the U.S. Marine Corps.

Capt. Samuel A. Schultz, 28, of Huntingdon Valley, Montgomery County, died when the CH-53E Super Stallion he was piloting went down somewhere in the vicinity of El Centro, California, military officials said. Shultz had joined the Marines in 2012 and previously served at stations in Florida, Texas and North Carolina.

Schultz was a graduate of Penn State University and Abington Senior High School, according to reports. His body is expected to be returned to Dover Air Force Base on Friday evening.

"The hardest part of being a Marine is the tragic loss of life of a fellow brother-in-arms," said Col. Craig Leflore in a press release. "My deepest sympathies go out to the families and friends of Capt. Samuel Shultz, 1st Lt. Samuel Phillips, Gunnery Sgt. Derik Holley, and Lance Cpl. Taylor Conrad."

The Marines Corps said the cause of the crash is still under investigation. The helicopter took off from an airfield in San Bernardino County to practice landings in so-called "unimproved zones."

The military's CH-53E helicopter has crashed before; most recently, one of the aircrafts went down in Japan in October 2017. Japanese officials expressed outrage when the military resumed flight operation a week after the crash occurred.