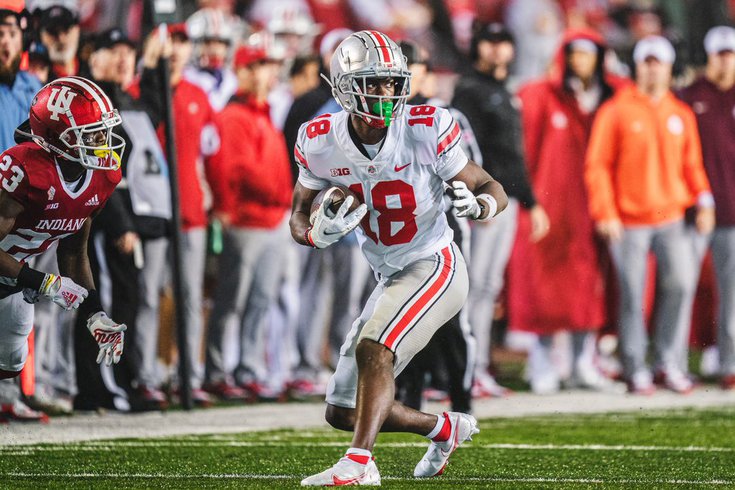 Marvin Harrison Jr. is clinched in an internal conflict. The gifted, rangy 6-foot-3½, 205-pound Ohio State sophomore receiver and St. Joe’s Prep graduate is trying to live in the present.

He has no problem admitting he’ll walk right into the considerable shadow of his father’s Pro Football Hall of Fame bust. He embraces the fact that he’s Marvin Harrison’s son. His greatness was marked since birth with his father’s name. With each progression, he’s fulfilled that promise. He holds almost every city receiving record, starring for St. Joseph's Prep. In the very brief time he’s been at Ohio State, it’s easy to project Marvin Jr. as a college superstar, graduating early from Ohio State and going on to be a first-round NFL draft pick.

He thinks about those things himself.

That’s where the conflict lies.

“Staying in the present is absolutely one of the hardest battles that I have mentally right now,” said Marvin Jr., who splashed on the national scene last January in his first college start in of all places the Rose Bowl, catching six passes for 71 yards and three TDs, averaging 11.8 yards a catch as a true freshman. “I don’t want to get too ahead of myself, and I’m trying to take everything day-by-day, practice-by-practice, one game at a time. But, I’ll admit, I do dream about bigger things. I want to keep working, and I know I have a lot to improve on.”

Harrison Jr. will be starting as a true sophomore for the nationally ranked Buckeyes, playing opposite star Jaxon Smith-Njigba, a projected first-round NFL draft pick who is ranked by many as the No. 1 college wide receiver in the country. Smith-Njigba blew up in the Rose Bowl, with 15 catches for 347 yards and three touchdowns, while setting a record for most receiving yards in any bowl game in FBS history, in addition to the six catches of 30 yards or more.

This came after Ohio State’s leading receivers — Garrett Wilson and Chris Olave, taken back-to-back at No. 10 and No. 11, respectively, in the 2022 draft — opted out of the Rose Bowl after declaring for the NFL draft on December 27.

“Marv’s his own person, but he certainly had a great example of, obviously, a Hall of Fame dad and what he did, but that’s not easy to do, to follow in someone’s footsteps who’s a Hall of Famer like that,” Ohio State head coach Ryan Day said this spring. “I think it’s easy for us just to look at it and say, ‘Well, you know his dad played in the NFL and then became a Hall of Famer.’ There’s a lot that comes with that. A lot of expectations, especially when you share the same name as your dad. I think Marvin has done a great job of kind of blazing his own way.

“I think the expectations have always been there for him and it’s not easy, but his work ethic, his approach, his attitude, who he is as a person, his parents raised a really great young man, and he’s going to do his own thing,” Day said. “But he’s blessed with a tremendous amount of talent, but really skill and discipline are off the chart too.”

Marvin Sr. liked to carry a low profile when he would watch Marvin Jr. play at St. Joe’s Prep, often perched in the corner of the stands by himself. The Hall of Fame receiver, who was once accused of being involved although never considered a suspect nor ever charged in an April 2008 shooting, would pleasantly welcome fans who approached him during games and has an old-school approach when it comes to his son.

When Marvin Jr. arrived in Philadelphia after the Rose Bowl, Marvin's father was there to pick him up from the airport. Marvin Jr. put his bags in the trunk, got settled in the passenger's seat and the first thing his father said to him, after scoring three touchdowns in the Rose Bowl and having random people stop him for selfies and praise him on both coasts, was “You have to work on the blocking,” in reference to a holding call Marvin Jr. got called for early in the game.

With Smith-Njigba no doubt receiving added attention by opposing defenses this season, it could open a whole new world for Marvin Jr.

It’s placing Marvin Jr. to be more of a leader in the receiver’s room.

“Everyone leads differently and at Ohio State, we definitely place a lot of emphasis on leadership, but I’m more of a guy who leads by example and I’m ready to continue earning the respect of the other guys,” said Harrison, who is 19 and carries a 3.3 GPA majoring in business finance. “I’m good at 205 pounds and my speed is better. My 10- and 20-yard sprints feel more explosive. I feel stronger, too (he benched 225 pounds for 20 reps and maxed at 330). I feel great, I feel healthy going into this season.

“I think the biggest thing I learned from last year was being confident in myself. That doesn’t really happen until you’re out there and you’re doing it. That didn’t come out until the Rose Bowl. I knew I could play well. I trusted my training and my coaches. But I still don’t feel that I have done anything at the college level.”

That will come this year.

As a true freshman, Harrison Jr. suited up for every game and in four games played, including the Rose Bowl, made 11 catches for 139 yards, averaging 12.6 yards a catch, his longest going for 25 yards — and made a tackle for a safety against Indiana. He never made a tackle in his life before that.

“I definitely believe in speaking things into existence,” Marvin said. “But it goes back to that fight. I don’t want to get too ahead of myself. The day before the Rose Bowl I said to myself, ‘I could do this, I could have a great game.’ I talk to myself all the time. I just make sure people aren’t around me listening when I do (he laughs). I think St. Joe’s Prep prepared me a lot for this. My junior year at Prep we had three national games on TV, two were on ESPN.

“That kind of experience helped me prepare for this level. I know what’s going to come at me this year. I do feel the eyes on me, especially with my name, but that’s the way it’s been my whole life. I never shied away from that pressure. Actually, I like it. I’ve worked out with C.J. [Stroud, the Buckeyes starting quarterback] over the summer. When I was home, me and Kyle [McCord, the Buckeyes back-up quarterback, and Harrison’s St. Joe’s Prep teammate] got work in. There is a great connection between me and those guys.

“The chemistry was good, and it developed more in the spring with C.J. We have a great team. I want to get better, and the stats will take care of themselves. My biggest priority is winning.”

There’s a good chance No. 18 will shine again under the lights.

For the time being, Harrison will fight the internal battle to stay in the present, because the future is waiting, and it looks bright.