Jeremiah Trotter Jr. is ready for a breakout year at Clemson 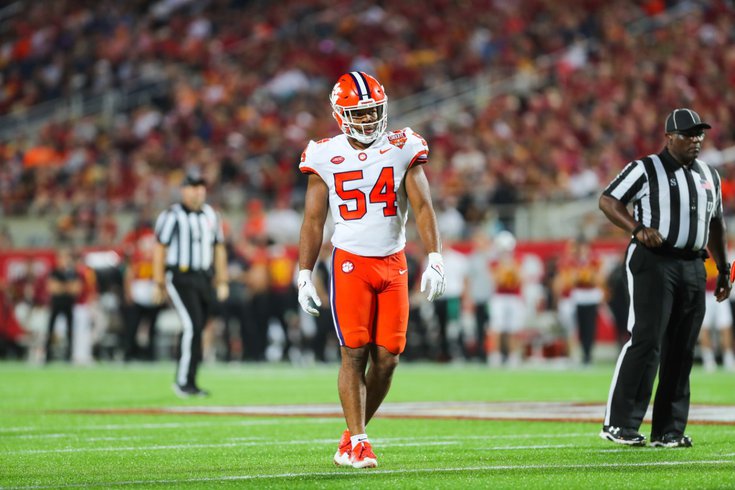 It’s that time of year again. That time when sweat will spill off his brow like it’s spewing from a facet. That time he knows each speed drill, each cone drill, each press bench, each squat, that he invests into, he’ll get more back.

Jeremiah Trotter Jr. doesn’t need his dad to wake him up on summer mornings anymore. He does that himself. He doesn’t need his dad, beloved former four-time Pro Bowl Eagles linebacker Jeremiah Trotter, to drive him to the local track for an early workout anymore. He does that himself, too. He’s even doing his own laundry for the first time. No one has ever had to push Jeremiah Jr. to succeed. He just needed his dad to wake him up and drive him to where he had to go — then, not now.

Now, Jeremiah Jr. wears fluorescent orange. The No. 54, like his dad wore in the NFL for 11 years, is the same. So is the path. Jeremiah Trotter Jr. has always aspired to follow his father’s footsteps into the NFL. Each year, he gets a step closer.

This year, Jeremiah Jr. will take a mighty defining stride in that direction as the starting middle linebacker for nationally ranked powerhouse Clemson this fall as a true sophomore, after starting at middle linebacker throughout the spring for the Tigers.

As a true freshman, Clemson head coach Dabo Swinney had no other choice: He had to put Trotter on the field. Playing primarily special teams, Trotter was credited with 22 tackles (one for loss) and one sack over 13 games that included 59 defensive snaps. His college debut came against eventual national champion Georgia. He was an ACC Honor Roll selection who had five tackles and his first career sack against South Carolina State and preserved the Tigers’ 30-0 shutout over South Carolina with three tackles, including a huge goal-line stop at the Clemson three.

“When I think about Jeremiah, I think about throwback and what a great football player he is,” said former Clemson defensive coordinator and linebacker coach Brent Venables last season, before he got the job as Oklahoma’s head coach. “The game is very natural to him, his movement is natural, his instincts for the football are special. He closes fast and is a very explosive contact hitter. He can change direction and play in space, and he comes from incredible bloodlines. His dad was an NFL veteran who was a Pro Bowler, a great leader, a real student of the game and you see that in his son. Jeremiah is not very vocal. I call him ‘the quiet assassin.’”

“I definitely learned a lot last year,” Jeremiah Jr. said. “I learned how the defense works and the scheme in what they want do. I wanted to learn all the playbook and the defensive line, with how stunts worked, so I can play faster and react faster from my freshman year to my sophomore year. I wanted to show what I could do on special teams last year and show the coaches the player I am and the talent I have. It’s why whenever I had a chance to get on the field, I tried to make the most of it as a (true) freshman.”

There is a huge athletic gap between the high school level and a major program like Clemson, which struggled in 2021 —by Clemson standards — and finished 10-3 overall and in third place in the ACC Atlantic Division with a 6-2 record. But for Trotter, who already carries a high football acumen and by playing at such a high level at national power St. Joseph's Prep, that gap was closed quickly.

“Because I started early (he enrolled in January 2021), I would say getting there in the spring helped me, so when I got to fall ball, there was a comfort level as far as my position at the WILL (weak-side linebacker), where they had me. I began to feel more comfortable in what I had to do and where I needed to be on the field,” said Jeremiah Jr., who carries a 3.2 GPA as a business major. “I think that allowed me to play faster when I did get the opportunity to get reps at practice and in the games I played. Last spring prepared me for the fall.

“When I first got here, I knew I had the ability to play here. But honestly, I felt I was playing a little lower than I like to play, because I was a little unsure what my responsibilities were. I didn’t want to be running around doing the wrong thing. I didn’t want to be that player who didn’t know what I was doing. That slowed me down a little at first, thinking a little bit instead of having everything come naturally.

“Once I got comfortable, I was able to do what I did in high school, flying around making plays.”

A huge plus was Trotter Jr. went through an entire season completely healthy for the first time in four years. At St. Joseph's Prep, he battled through some broken bones. As a sophomore in 2018, Trotter Jr. played at about 70 percent, braving pain in almost every game, battling a burst bursae sac in his knee, a stress fracture in his foot, a broken right thumb and a broken right pinky. He came back to lead Prep in the state title game and was arguably the best player on the field. As a junior, he suffered a broken right arm, which splintered into six pieces when he got caught in an awkward position during the fifth game of the season against Roman Catholic. As a senior, he suffered a dislocated wrist in the state semifinals, which prevented him from playing in the state title game with his younger brother Josiah, a senior at St. Joseph's Prep who’s committed to West Virginia.

“It felt good being healthy and showing what I can do last year,” said Jeremiah Jr., who’s now bench pressing 375 pounds and squatting 630 pounds. “I feel good at 225 pounds. But I feel I can improve on my pass drops and keeping my head on a swivel. I need to fine tune getting off blocks and getting rid of offensive linemen quicker to make tackles. There are always things that I look at to improve my game.

“I’m trying to be more consistent. Since last year, I do feel stronger, and my practice grades are getting better. When I first got here, I just wanted to show the coaches that I’m going to grind. Whatever came from that is a blessing. It’s still hard to believe I’m playing at Clemson.

“We definitely have some things to prove this year. There’s a lot of talent on this team with a lot of older guys who were disappointed in last season. We’re coming back with a vengeance. We’re back with more experience and we’re definitely a different team. My priority is to win Clemson a national championship. Personally, I want to prove that I belong among the top linebackers in the country this year.”

“Jeremiah has only scratched the surface of all of the things he’s able to do,” Trotter Sr. said. “He’s a new-aged linebacker with the abilities to play old-school football, taking on blocks if he needs to, able to cover in space. He has all the ability in the world and burning desire to win. He’s reached the point, and I keep telling him this, that when your coaches don’t have to tell you something, and you’re doing things on your own, you’re going somewhere.

“The feedback I was getting is that Clemson shuffled some things around and Jeremiah is going to be the starting middle linebacker, which is where he started in the spring. I keep telling him to keep working hard and playing hard. He’s played and loved football since he was five years old.”

Jeremiah Jr. admits there is more work ahead.

“You have to earn respect to get respect, and this year I’m definitely ready for that,” he said. “I feel I can fill the role of being more vocal. Freshman year I wanted to get the guy’s respect through my work ethic and how I carried myself. That comes from my mom and dad. It makes me happy to make my parents proud. I have more things to accomplish in life. My dad tells me all the time that me and my brother are a lot better than he was when he was in the NFL. He stresses we can’t waste the ability and knowledge we got through him that we’ve been blessed with.”

It looks like “the silent assassin” is ready to explode.