Mary Lattimore takes her harp on the road 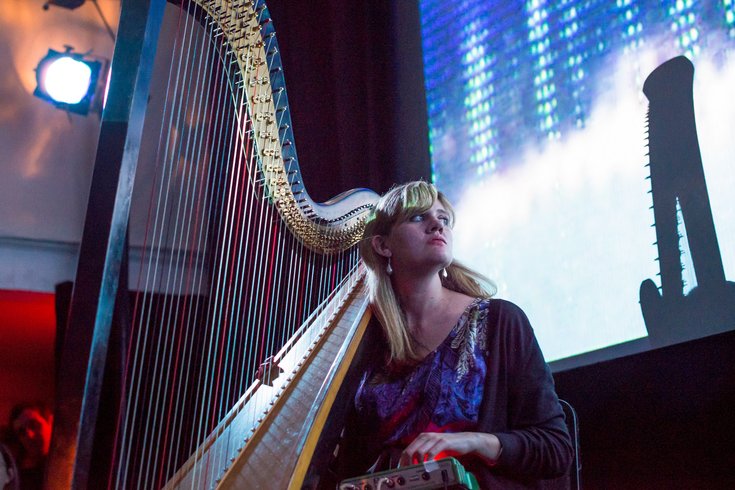 Mary Lattimore is an eager musician, the type that never seems bored or out of place.

“I just played last night with Yo La Tengo,” she told me last week, speaking on the phone from the bustling but under-the-radar Big Ears Festival in Knoxville, Tennessee. “It’s sort of like a bunch of people sitting in ... the guy from The National, a guy from the Sun Ra Arkestra, and a guy from a band called The Necks. So we just had a little jam last night.”

It’s a matter-of-fact recap for such an excitingly unexpected grouping, but Lattimore and her harp are used to sitting in with this type of company by now.

“It was crazy,” she admits after a little prodding, “it’ll never happen again probably but it was really fun.”

Something similar could be said for the many pieces of Lattimore’s music career.

Following in the footsteps of her mother, who is a professional harpist in North Carolina, Mary began playing the instrument when she was 11-years old. After high school, she attended the Eastman School of Music in Rochester, N.Y., and while Lattimore has never fully stepped away from classical music, over the last decade she’s been entrenched in Philly’s indie rock scene as both a session player and solo artist.

Lattimore moved to Philadelphia in 2005 – “I lived in Austria for a long time but my Visa ran out and so I just had to find a new place to live,” she says – and found herself swept up in a since-exalted music scene.

“Some friends of mine from college were in that band Espers and they lived in Fishtown and they had this really beautiful situation where they lived on Frankford Avenue and they had a giant backyard where they would have shows,” Lattimore remembers. “It was just a really good time to move to Philly because all that was happening, and getting to know other people. So like Kurt Vile and Adam from The War On Drugs, just hanging out with those guys and then they’ve really been blowing up lately. I feel really proud of them and really happy to have lived in Philly.”

For Lattimore, the friend-first, collaborator-second approach has yielded her credits with everyone mentioned above, and also the chance to record with the likes of Sonic Youth guitarist Thurston Moore and singer Sharon Van Etten. Many of these recording sessions were also punctuated by the instrumentation and production of Philly’s Jeff Zeigler, who Lattimore has collaborated with directly as a sort of duo for a series of albums.

“With Jeff, we’re so comfortable with each other that I don’t feel like I’m wasting his time if I’m just sort of messing around and he’s recording it,” Lattimore says. “I think he’s cool with that too.”

On their first album together, 2013’s "The Withdrawing Room," Lattimore improvised her harp parts while Zeigler played synth and turned knobs. The result was an ambitious debut that set a tone: immediately timeless music inflected with new-age experimentalism. The next year they shared another album, "Slant of Light," and last month Lattimore released her own, "At The Dam." The new record, named after Joan Didion’s 1970 essay about the Hoover Dam, is Lattimore most forwardly solitary both in approach and execution. Her harp, still filtered through effects here, riffs repetitively throughout, doubling back on meditation-like phrasings but also bursting out into empty space unpredictably.

"At The Dam" is the result of a prestigious Pew fellowship award and accompanying financial prize Lattimore won in 2014.

“I wanted to have something physical as sort of proof – not proof, but sort of like as a keepsake to this period in my life where I felt really lucky to get this award,” she says. “I thought it would be cool to take a big trip and just record myself along the way using the money from Pew. I just recorded it myself, just on my laptop with Garageband. I just stopped in these different places and just sort of improvised, and that’s what came out. Kind of inspired by landscapes and being quiet, driving along, seeing a bunch of nature when it was really cold in Philly, escaping that. The sounds are definitely influenced by the movement and the traveling and the mood you get when you’re on the road.”

Like many of Lattimore’s songs up to this point, "At The Dam" features intensely specific song titles: the first track is a sad ode to her family’s blind and recently passed family dog, Otis.

Another, “Jimmy V,” pays tribute to famed North Carolina State University basketball coach Jim Valvano, who delivered an iconic ESPYs speech in 1993 shortly before his death the same year. Lattimore’s song is both dark and uplifting at once, a shimmering memorial: high notes ping out of space acutely, melodic runs warble unexpectedly with effects.

“I just try to translate whatever’s on my mind into melodies,” Lattimore offers. “It’s kind of like just having a conversation. I can’t really explain it, but it’s good to have something in mind; you know, like writing a little poem or something, or writing a little short story but in the form of music.

“Those songs, it’s all about sort of death, but not in a bad way, just sort of remembering the fun times with the dog,” she adds with a laugh before trailing off. “I don’t know, it’s just sort of like ... vibes.”

The last song on "At The Dam," much of which was recorded at Joshua Tree National Park in California, is called “Ferris Wheel, January,” a sort of diary-entry reflection on time spent with a lifelong friend.

“I have this really close friend from high-school, Jeff, and he lives out in L.A. I was out in L.A. and we spent a lot of time together and it was really fun,” Lattimore says. “And we went up on this Ferris wheel and it just felt like total summertime even though it was January. It was really beautiful. That song is sort of reflecting on getting older and being friends with somebody for like a good 15 years ... That’s kind of a happy song.”

After our conversation, Lattimore planned to take in a performance from harpist Zeena Parkins, a celebrated experimental instrumentalist who has recorded with artists like Björk, Nels Cline, and as a member of the avant band News From Babel. Lattimore rattles off a handful of harpists like Parkins as influences, but she’d likely be too humble to put herself in the same company. Still, she seems proud of bringing the harp into new spaces herself.

“You know," she said, "representing the instrument in an audience that maybe wouldn’t hear it otherwise is always good ... It’s a big thing to carry around and taking it to other kinds of venues is good I think. Keep it modern and not so alien and antiquated and prissy.”

Lattimore’s enthusiasm is infectious, and she seems bent on bringing her harp everywhere, creeping into spaces you might not expect and occupying them beautifully.

Mary Lattimore’s "At The Dam" is available on Bandcamp.