The Mass has ended and the journey home begins

Pope Francis wrapped up his whirlwind tour of Cuba and the United States on Sunday, and is on his way home to Rome.

He grabbed a window seat after boarding the jetliner that will carry him across the Atlantic Ocean, then waved through the window at the crowd at Philadelphia International Airport.

A few minutes earlier, he thanked a volunteers and supporters at a gathering in an Atlantic Aviation hangar.

As his final papal Mass in the United States drew to a conclusion, Francis blessed the multitudes who came to Center City on Sunday, asking them to follow the teachings of the church and for their prayers for him.

The crowd of pilgrims was estimated by some media agencies as close to a million; they had streamed into the city throughout the day.

SEPTA officials said they were ready for the mass exodus of the churchgoers from the Ben Franklin Parkway.

"So far, so good," said spokesman Manny Smith. "No glitches. Our post-event service has seen the largest crowds at Walnut-Locust, Jefferson Station and 30th Street Station. Things have been moving quickly. We're boarding the trains successfully and keeping things moving."

There was a large queue at the Walnut-Locust station, but Smith said it was clear at the platform level trains on the Broad Street Line service came through every five minutes. When crowds swelled, 25 buses were called in to express riders to AT&T Station.

Starting at 5 a.m. Monday, SEPTA expects to return to a normal weekday schedule. Smith advised bus riders to check the agency's website for potentially significant detours on Center City routes due to remnants from the weekend's security apparatus. On Monday, Regional Rail lines will operate on a Saturday schedule, with additional trains for the Cynwyd and Newark lines.

"We learn from every big event," Smith said. "For Made in America earlier this summer, crowds left the Parkway all at one time, so we are prepared for this. In the planning and buildup to [the] papal event, our staff also looked back to our experience from the parting crowd from the Phillies World Series parade in 2008."

Delaware River Port Authority officials announced Sunday that the Benjamin Franklin Bridge will reopen to vehicular traffic beginning at 4 a.m. on Monday. The accelerated reopening will allow for normal operation during the Monday morning rush hour.

Pedestrians will be able to access the Ben Franklin Bridge foot walk overnight and throughout the day tomorrow.

Christian and Mary Cortez, of Morristown, New Jersey, drove to a SEPTA station and took a train into Philadelphia for the papal Mass. They plan to head home the same way.

They found SEPTA to be clean and the people-friendly. 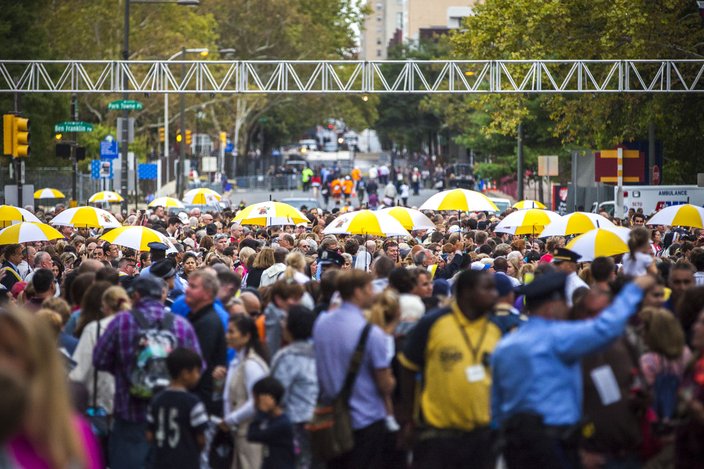 The Eucharist was distributed at many points along the Benjamin Franklin Parkway during the Papal Mass, Sunday, September 27, 2015. (Thom Carroll / PhillyVoice)

Jenny Suarez, of Colchester, Connecticut, took Amtrak into Philly. She is staying the night with a friend before heading home tomorrow.

John Nicholas, of Philadelphia, missed the Mass while waiting in line at a security checkpoint for hours. But he said he had no problems taking SEPTA into Center City.

"I'm just going to walk or take SEPTA," he said. "SEPTA wasn't bad getting here. The only problem was getting in. There wasn't enough checkpoints."

"It wasn't a problem getting out, but we didn't like going up Chestnut instead of Market," said Mary Delorenzo, 65, of Bensalem, who waited almost more than three hours to get through security to the papal Mass. Market Street was closed at 22nd and throngs of attendees were rerouted to Chestnut Avenue.

"It was a mess," said Mary McCandless, 63, about entering the Mass. "They should have consulted with Disney World. They can do this everyday."

"Getting in was a nightmare but, getting out, this is just fine," said Tricia Indelicato, 32 as they made their way out of Center City.

The crowd filled Spring Garden Street after the end of the papal Mass on Sunday evening. (PhillyVoice staff)

Those leaving the Mass said the event was overwhelming.

Stella Carmen and her brother, James Santos, came from Texas together to represent their family, one of the pope's themes.

"It was very family," said Santos. "Families were all around us."

Carmen said it was "very emotional," especially at the point in the Mass where "peace be with you" was said and the entire audience reached out to each other.