Offices, hotel, retail and residences to be built along 16 acres on the Delaware River 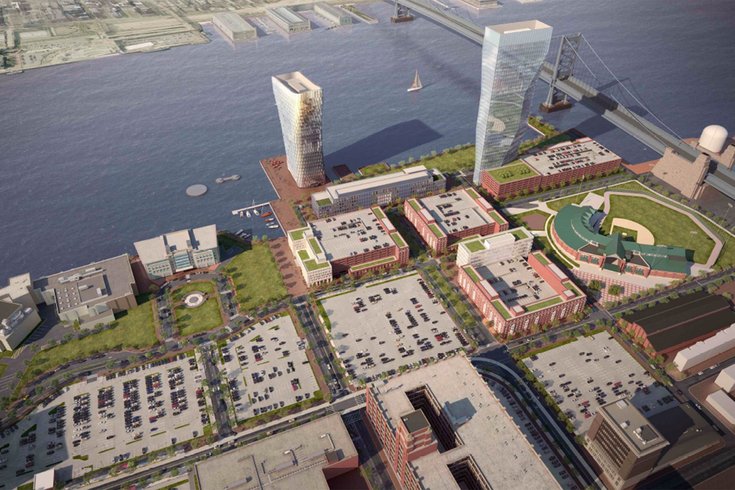 Rendering of the Camden waterfront plan – from the Camden side of the Delaware River – that will be announced Thursday afternoon.

Camden will receive the largest private-sector investment in its history with a massive waterfront development project expected to cost $1 billion, officials will officially announce Thursday afternoon.

Liberty Property Trust, whose previous projects include the Comcast Center, Liberty Place and the Navy Yard, plans to build up to 1.7 million square feet of office space along 16 acres of waterfront, plus a hotel, retail and residences as well. The group expects to be able to break ground on "The Camden Waterfront" development late next summer and move in the first occupants in late 2018 or early 2019.

"'The Camden Waterfront' represents a unique opportunity to develop a project of this scale in the center of a major metropolitan area. This visionary project will reshape the central waterfront in a way that will be truly transformative for Camden,” said Liberty Property Trust Chairman Bill Hankowsky. “Through the Grow NJ program, the state of New Jersey has created an economic development program which, if approved, has the potential to be truly transformative to the city of Camden. It will create a sustainable, high performance environment that could not only ensure the future of the city but also enhance the competitiveness of the entire Philadelphia region.”

Governor Christie called the announcement "proof that what Camden's been doing is working," while Camden Mayor Dana Redd said the project will "fundamentally change the city's future."

The architect of record is Robert A.M. Stern Architects, which is headed by Robert Stern, dean of the Yale School of Architecture.

"Here in Camden we are presented with an opportunity to make this city vibrant and viable once again," said Stern.

The project would create thousands of jobs for construction workers and bring thousands of permanent jobs to the city.

Note: A previous version of the video above showed an incorrect site boundary. The video has been corrected.