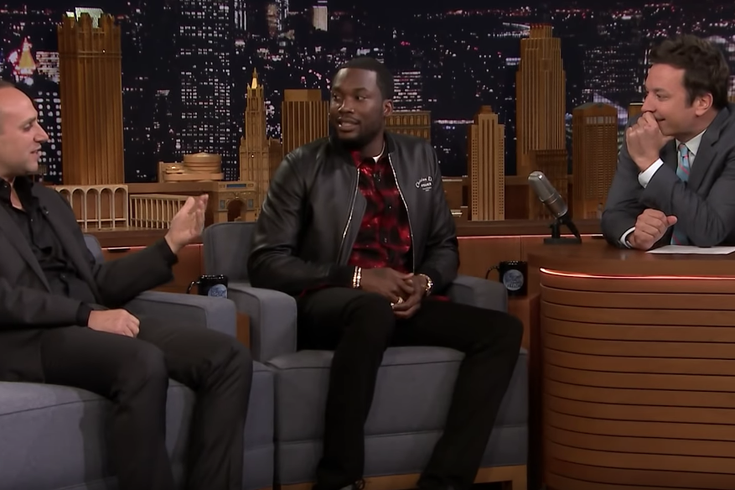 Meek Mill returned last night to "The Tonight Show Starring Jimmy Fallon" to give an interview and discuss his plans for criminal justice reform with friend, co-owner of the Sixers, Michael Rubin. The two met at the 2015 NBA All-Star Game in New York and formed a close friendship. Rubin was one of Mill's biggest advocates while he was in prison from November 2017 to April 2018. Together the two have formed an alliance called the Justice Reform Alliance, or REFORM.

According to their website, “REFORM is a movement to liberate one million people unjustly caught in the criminal justice system.”

Rubin mentions in the interview with Fallon, “There’s no logic. It’s just a system that was built decades ago that makes no sense, and it needs aggressive people to say, 'This is broken. We need to fix it.'"

"Our mission is going to be very simple, which is how do we get a minimum of a million people out of the criminal justice system in the next five years, and how do we, over the next – kind of long term – how do we cut the population in half?"

REFORM plans to make these changes through a researched approach rooted in three strategies, the site states.

“We will seek to change laws, policies & practices that are unjust; we will provide support and representation to the everyday people who are unfairly caught up in the system; and we will spotlight the injustice cases and issues we address through an influential and far-reaching communications platform.”

This is Mill’s first appearance on "The Tonight Show" since he was arrested for reckless endangerment last year on Aug. 17. He was on probation for a crime he committed at 19, and his arrest violated his probation. Mill was sentenced to 2 to 4 years in a state prison, but was released in April 2018 after the the Pennsylvania Supreme Court ordered for his immediate release on bail.

He compared Philadelphia County to Montgomery County in the interview, stating, “They go to treatment, we go straight to jail."

"People like myself, we get the bad end of the stick. Not that we shouldn’t be punished for criminal activity, or you should not go to jail if you commit crime, but probation was designed for one to help better itself and I’ve been on probation for what—"

Meek considers himself lucky for having such a strong support system through the whole process, “To have some type of support, where I come from, we don’t really have a lot of support. So, you know, I feel lucky. And I feel lucky to be able to shed light on a show like this to people that's trapped behind walls that would never get a chance to shed light on that situation.”

After the interview, Mill preformed “Dangerous” with PnB Rock and Jeremih, in support of Meek’s EP, "Legends of the Summer."