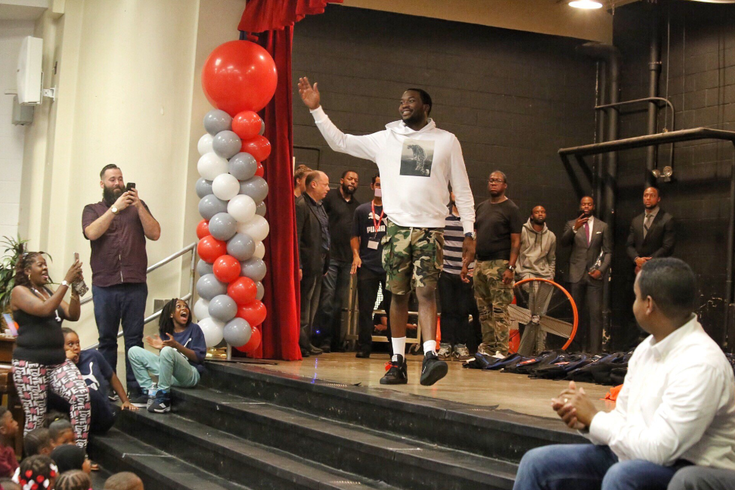 Philadelphia rapper Meek Mill made a surprise visit to his old elementary school in Strawberry Mansion on Wednesday morning and with him, he brought a whole lot of backpacks.

Mill grew up in North Philly and attended James G. Blaine School back in the day. During his visit this week, he brought along 6,000 backpacks filled with school supplies to be given to the students at Blaine and throughout the School District of Philadelphia.

Mill partnered with Puma, Fanatics, United Legwear and Philly-based apparel brand Milano Di Rogue to provide all of the supplies, according to TMZ.

Here's the big reveal moment from this morning. (Warning: The kids go wild.)

Growing up, Mill said he knew what it was like to face financial hardship.

"Those memories stay with me and that’s why I’m committed to giving back to families in my hometown, putting smiles on kids’ faces and helping them start the school year on the right note with the right supplies," he told TMZ.

Students at Blaine School had a very special visitor today! Thank you to North Philly's own Meek Mill for supporting our kids. It was great joining together to distribute backpacks and talk about starting the school year right. #PHLed pic.twitter.com/qY6RxJQpTI

Thank you @MeekMill for giving back! The students will enjoy their new backpacks and school supplies 🖍📒✏️
What a great way to kick off the school year! 🎒 #PHLed pic.twitter.com/mRlVf2SW63

He handed out three different styles of bags for elementary, middle and high school students, as well as other necessities like sharpeners, rulers, glue sticks, crayons, notebooks and pens.

The giveaway comes a week after Mill's request to remove Common Pleas Judge Genece Brinkley from his case was denied by the Pennsylvania Supreme Court. Mill and his counsel were advised to start the appeals process with the Superior Court of Pennsylvania.

“While the Pennsylvania Supreme Court declined to immediately hear our application to reassign Meek’s case to a new judge, we understand the Court wants us to go through the normal course of appeals to the Superior Court and we intend to do just that," Mill’s attorney Joe Tacopina said.

Mill remains free on bail during the appeals process since he was released from jail in April.