Mill, 30, a Philadelphia native, walked out of a Chester prison late Tuesday afternoon after the state Supreme Court overruled Common Pleas Court Judge Genece Brinkley, who had sentenced him to 2 to 4 years in prison for violating probation. Clad in black slacks and a blue shirt, the rap artist was photographed with a grin plastered on his face and a cellphone pressed to his ear as he prepared to board a waiting helicopter.

In what the New York Post's Page Six touted as an exclusive interview, Mill said the news that he would be released Tuesday came as a bit of a surprise and he said a prayer of thanks in response:

The rapper spoke exclusively to Page Six as he raced to the Philadelphia 76ers playoff game in a car after his close friend, 76ers co-owner Michael Rubin, personally picked him up at the jail and flew him on his personal helicopter into Philly to head to the arena.

In his first interview since being freed on bail, Meek said, “I am still dazed, I’m in a daze, this is great, and unbelievable.

“I always had confidence it was going this way, but I didn’t know when it would happen and I’d be free. It looked like it was going to take months more.”

The rapper had been in jail since November. The case has generated national attention, with social justice activists decrying his punishment as unusually harsh.

At varying points throughout his imprisonment, protesters demonstrated outside Philly's Criminal Justice Center to demand his release.

Mill posted a series of tweets after receiving the news on Tuesday afternoon.

He thanked God, his family and his public advocates, describing his five-month imprisonment as "a nightmare." He also thanked the Philadelphia District Attorney's Office, saying he was "grateful for your commitment to justice."

I’d like to thank God, my family, and all my public advocates for their love, support and encouragement during this difficult time. While the past five months have been a nightmare, the prayers, visits, calls, letters and rallies have helped me stay positive.

To the Philly District Attorney’s office, I’m grateful for your commitment to justice. I understand that many people of color across the country don’t have that luxury and I plan to use my platform to shine a light on those issues.

In the meantime, I plan to work closely with my legal team to overturn this unwarranted conviction and look forward to reuniting with my family and resuming my music career.

Mill was arrested twice last year – once after an alleged altercation at St. Louis International Airport, and again for popping a wheelie on his bike in New York City.

Those arrests violated Mill's probation terms, which stem from a 2008 firearms conviction.

Brinkley sentenced Mill to prison, citing a failed drug test and his noncompliance with a court order restricting his travel to Pennsylvania.

The court ruled that Mill should be released on unsecured bail and gave Brinkley 60 days to make a ruling on a post-conviction petition filed by Mill's legal team.

But the court denied a request by Mill's legal team to assign the case to another judge. Instead, it gave Brinkley the option to recuse herself. 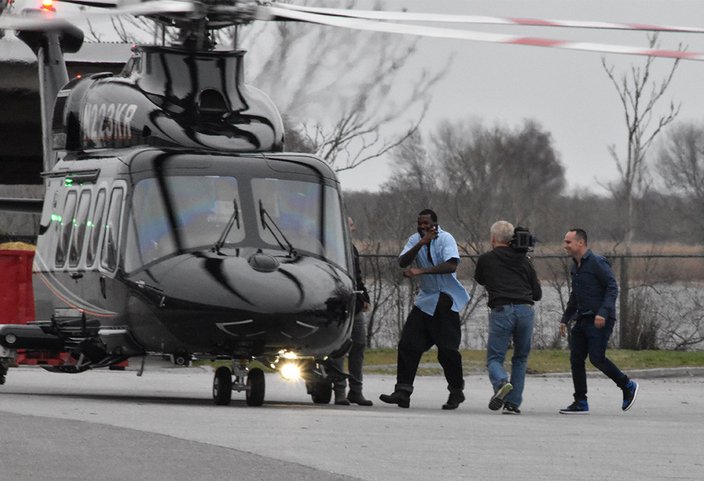 Rapper Meek Mill moves to board a helicopter late Tuesday afternoon after his release from State Correctional Institution Chester. He was reportedly headed to the 76ers playoff game in town tonight.

Joe Tacopina, Mill's defense attorney, released a statement saying he was "thrilled" by the ruling.

"As we have said all along, Meek was unjustly convicted and should not have spent a single day in jail," Tacopina said. "We are also pleased that the Pennsylvania Supreme Court has noted that Judge Brinkley may opt to remove herself from presiding over any further proceedings in Meek's case in the interests of justice."

The order noted that prosecutors acknowledged in court that there are "credibility issues" with Philadelphia police officer Reginald Graham, the arresting officer who served as a key witness at Mill's 2008 firearms trial.

It also stated that prosecutors are not opposed to Mill being granted immediate bail.

The list was compiled under former D.A. Seth Williams, who has since been convicted of corruption. It urged prosecutors not to call the police officers as witnesses, alleging the officers had displayed a history of dishonest behavior or racial bias.

Graham was investigated by federal authorities for several alleged acts of corruption stemming from a November 2013 incident. That incident came five years after Graham appeared as the sole witness during Mill's 2008 trial.

Various celebrities visited the rapper during his imprisonment at the State Correctional Institution Chester in Delaware County.

Much respect to Michael Rubin for simply being a good friend and lending his platform to help others. Thousands of people are treated unfairly daily by the criminal justice system. I can’t wait to see @MeekMill help lead the way for others that don’t have a voice. Welcome home! pic.twitter.com/n9DcBwQQGk

"Meek is excited to be reunited with his family, and we, along with Meek, intend to continue to shine the light on a justice system in need of reform to prevent any other citizen from being put through what Meek has endured," Tacopina added.