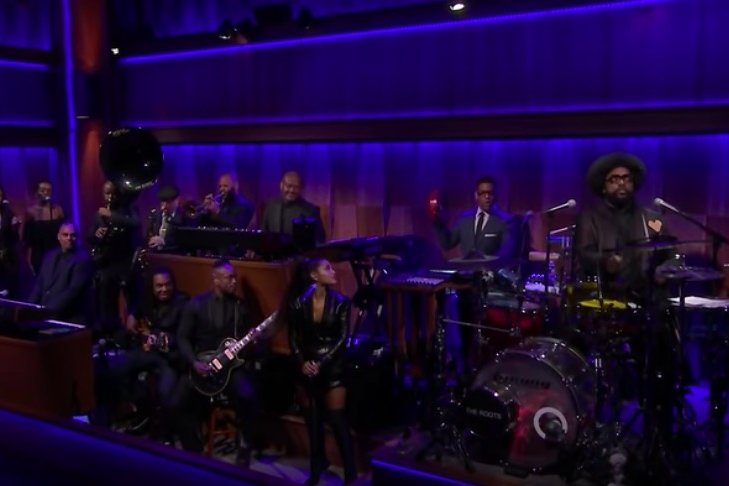 Ariana Grande performed alongside The Roots Thursday night to pay a special tribute to the late Aretha Franklin.

Grande appeared on "The Tonight Show" in the midst of a press tour for her new album, "Sweetner," which dropped Friday. Alongside Questlove and other members of the show's in-house band, she performed "Natural Woman."

The song was originally recorded by Franklin in 1967 and went on to become one of her most eponymous hits. Franklin performed the song more recently, in 2015, at the Kennedy Center Honors.

Since Franklin's passing was announced Thursday, many musicians, celebrities, and other public figures have paid tribute to the trail-blazing soul singer on social media, including Questlove.

The 3 seconds it takes for #ArethaFranklin to oooooze out the words “Sittin around..” is as pure & creative & as honest as any singer I’ve ever seen when a performance goes beyond mere… https://t.co/LLlXHVTbR5

It’s so weird to see the “normal news cycle” going on for #QueenAretha, as she should get her just due—-but part of me don’t even feel safe taking an eye of “them” for even a half hour. THIS is what I hate about these times we in.

Shortly before her passing, it was reported that Franklin was "gravely ill" and surrounded by family and friends in her hometown of Detroit. The "Queen of Soul" was 76.

Check out Grande's full performance with The Roots in the clip below.