Following in her father's footsteps, Aly Lupinetti will compete again at the Super Bowl of barbecue 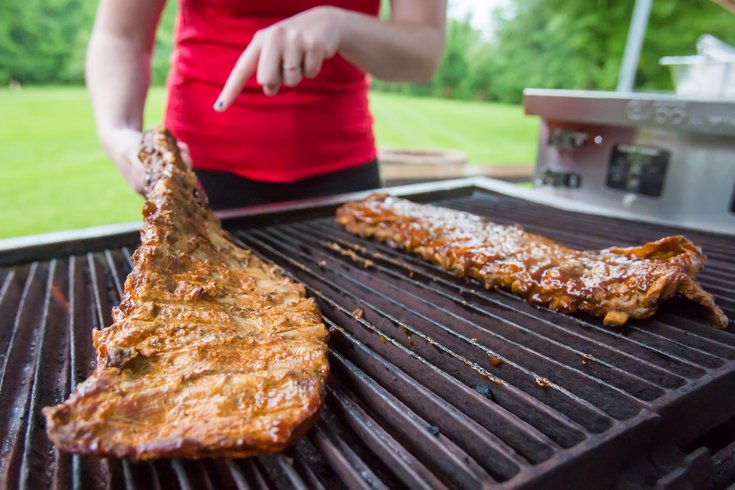 South Jersey pitmaster Aly Lupinetti watches closely as the BBQ sauce begins to bubble, signaling it is nearly ready to come off the grill.

In the world of competitive barbecuing – part sport, part hobby, part good ol’ boy fraternity and sometimes just business – the Philadelphia region is something of a wasteland.

Sure, there are small outposts selling decent ribs, chicken and such – Jack McDavid's Philly spots and seasonal roadside stops, such as Christine’s House of Kingfish in the pinelands of Shamong, for instance.

But when it comes to touring barbecue competitors, there is only one member of rib-cookin’ royalty in the Philly region: Aly Lupinetti of Mount Laurel.

Her company, Butch’s Smack Your Lips BBQ, has the trophies – more than 700 now – and decades of history to stake a claim.

While holding down a full-time job as a risk manager in Center City Philadelphia, Lupinetti travels about 15,000 miles a year, from April through September, for cooking competitions across the country.

After all, she’s the daughter of the late Butch Lupinetti, something of a grill legend. 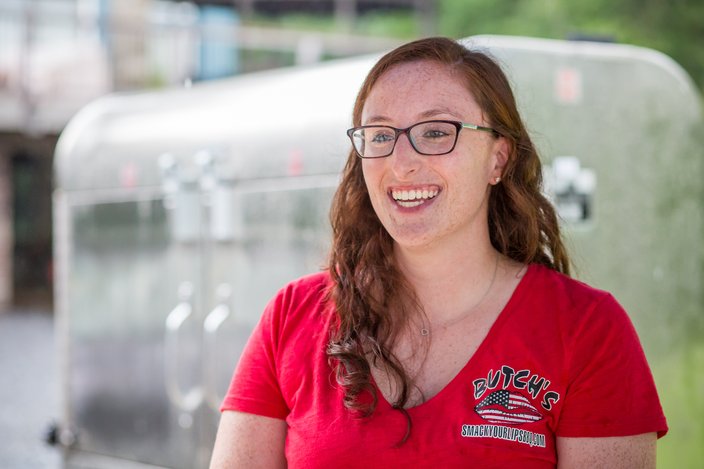 Aly Lupinetti of Mount Laurel, owner of Butch's Smack Your Lips BBQ, took over her late-father's award-winning business when she was 18. Her ribs will compete for the best in America later this month.

Butch had bested Food Network’s Bobby Flay in an episode of “Throwdown!” in 2006 and won several categories, including 1st place, in the “Best in the West Nugget Rib Cook-off.”

The Sparks, Nevada event, akin to the Super Bowl of rib cooking competitions, will be held Aug. 30 to Sept. 4 this year and draw about 500,000 people over six days. Two dozen teams will serve 240,000 pounds of ribs over the course of the competition, but not just for bragging rights: $14,500 in cash is up for grabs.

Unlike most competitions, cooking for the throngs is mandatory and there is an audience-choice winner as well as a winner selected by judges. 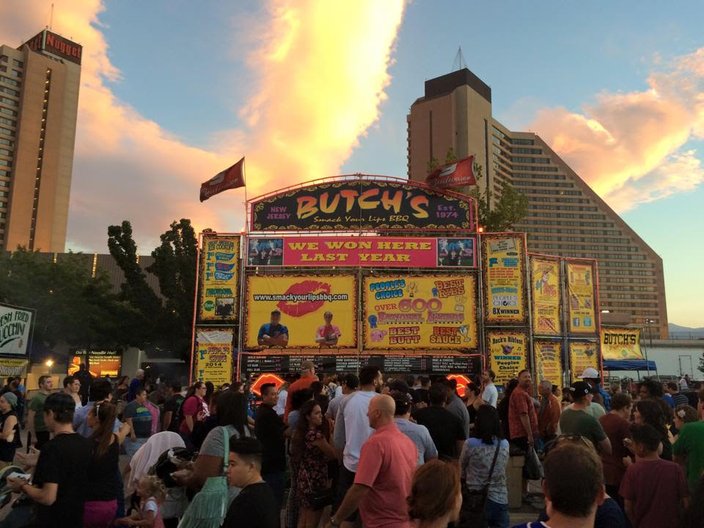 Half a million people attend the rib cooking contest in Nevada, where two dozen teams vie for the best ribs title.

Aside from a Pittsburgh entry which is actually rooted in Australia, Butch’s rib team is the only entry from the Northeast and the Mid-Atlantic regions.

After the unexpected death of her father seven years ago, Aly Lupinetti took over his business – at the age of 18 – to become one of the few woman-led grilling competitors in the country. After all, she had accompanied her dad to cooking competitions from the time she was a toddler.

Growing up, she heard the Butch stories first hand: raising hogs in rural Burlington County, cooking them overnight in a true barbecue pit dug on the family’s land, tending the fire – Jersey hickory is favored – while also tending to shots and beer over endless stories. 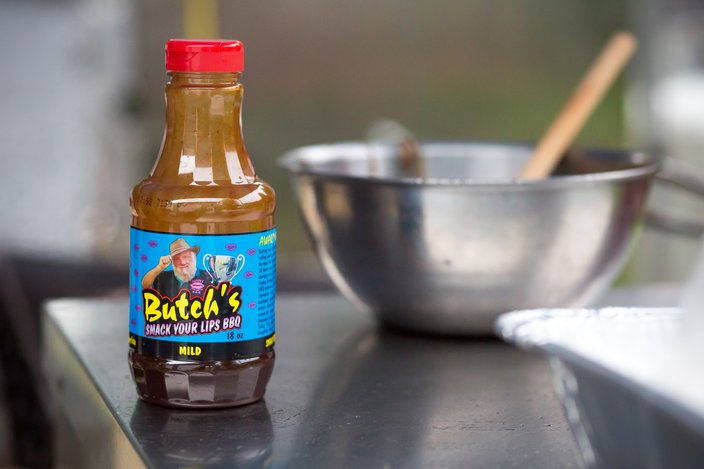 While building their barbecue empire, Aly Lupinetti's mother and father concocted a handful of sauces and dry rubs in their South Jersey kitchen. Because of demand, the sauces are now outsourced to a Chicago-based private-label manufacturer.

Lupinetti watched her mom, Lynne, and dad concoct and perfect award-winning sauces and dry rubs in the customized kitchen of their South Jersey home. And while the volume is such now that a private-label company in Chicago produces the rubs and sauces based on her dad’s recipes, she’s still tinkering in Butch’s kitchen.

She recently brought to market a new apple-flavored sauce begun by her father before his death, An old-school molasses-based sauce is in the pipeline for release next year. She thinks it melds her dad’s taste with her own.

When not competing, Butch’s caters events, shows and festivals. Their new food truck will be at the Garden State Country Music and Food Truck Festival on September 30 and October 1 in Atlantic City.

But competition, not catering or the business, is what drives Lupinetti.

Aly, her husband and her mother take the annual 40-hour, nearly 3,000-mile road trip to the Sparks competition kinda seriously: They permanently store three of their cookers in Nevada to ease the annual trip west. 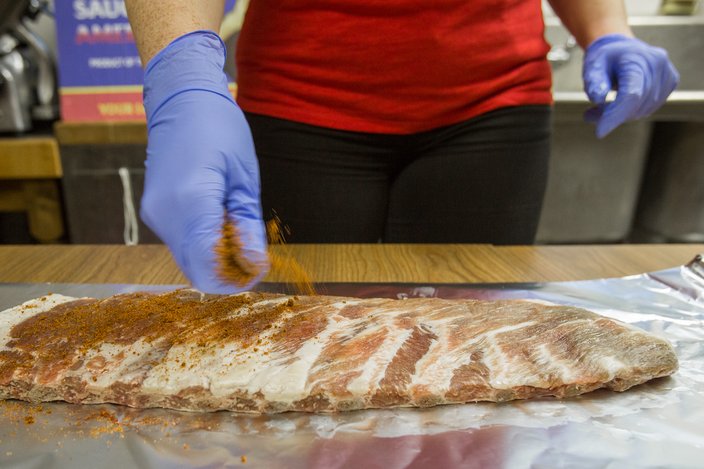 Aly Lupinetti applies “Magic Dust,” a dry rub of 30 ingredients, to the meat side only on a slab of ribs during a grilling demonstration for PhillyVoice.

And as with all but one of the contests they routinely enter, they use custom-cut St. Louis-style rib slabs – bigger and meatier.

They order exclusively from Farmington Foods outside Chicago, and the designer ribs ship directly to the competition site.

While Aly’s husband, contractor Matt Meyer, is now schooled in the ways of the pit, he plays a supporting role. Lupinetti is firmly the pitmaster.

In that role, she has one goal: win the big Nevada rib contest in her own right.

“We’re working on it,” she said with a smile as she demonstrated prepping two racks of ribs. The award-winning ribs sell for $26 a slab.

While cooking, she shared a few secrets with PhillyVoice readers.

Most surprisingly: She does not eat ribs.

Sure, she tastes them during the competition. But turkey and chicken are her personal favorites. Her mom craves brisket and smoked salmon, a staple of their holiday tables. 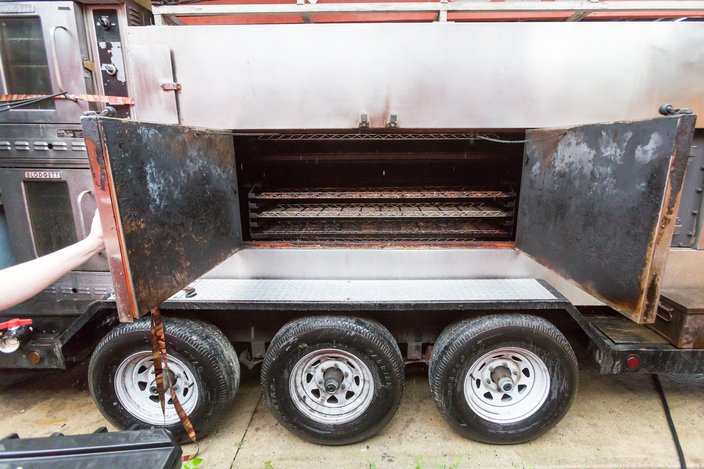 Aly Lupinetti shows one of 7 or 8 meat smokers on the South Jersey property. “This one's like a sibling to me,” noting the smoker – which holds 100+ racks of ribs – has been in the family her entire life.

And while there are competitions where other foods, such as pulled pork, are in the spotlight, ribs are her favorite competition category.

She begins with Butch's Magic Dust, a dry rub of 30 ingredients, applied meat side only to a rib slab. Skip the bone side because it will just burn away. And don’t over do the rub, she cautioned.

Allow the dusted slab to rest for at least half an hour. But longer, even overnight, is better.

She likes the “hot and not” way of smoking: a gas fire or real charcoal on one side of the cooker, space for the ribs on the other side with no fire, allowing space for a pan of water below the meat.

An inch of water is enough in the pan. Hot doesn’t mean blazing hot: a constant 225 degrees F is the goal and an oven thermometer is worth the investment.

Water-soaked wood chips – she likes hickory – go in a roll of heavy duty foil. For light smoke, float a foil bowl on the water’s surface. For heavier smoke, roll up foil into a loose ball, peirce several times, toss on coals.

Close the lid. Leave it closed.

“Because lookin’ isn’t cookin’!” she advises. 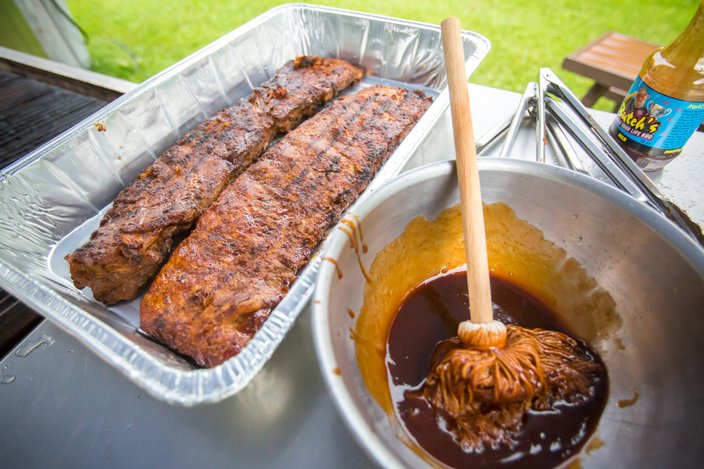 Aly Lupinetti of Butch's Smack Your Lips BBQ uses a mini-mop to sauce her ribs. The family has been cooking barbecue for years, accumulating more than 700 awards in competition.

You’ll notice there is no mention of barbecue sauce to this point.

That’s because applying sauce too early in the process creates a burnt crust. The desired caramelized sheen is only attained by saucing at the very end, explained Lupinetti.

After about 3.5 to 4 hours, the meat should be tender and pulling back from the bone.

That’s when the racks get moved to the hot side to “finish off.”

“Grill them as hot as possible; don’t walk away!” she cautioned.

When tiny surface bubbles form on the surface – check after about two minutes – flip them to the sauced meat side.

Lupinetti rests the racks for just a bit, then carves them into individual bones.

The finishing steps should take only about five or six minutes; more time means the sauce burns.

Her final tip was Butch’s mantra. Of course, now it is hers, too.