'A meme is born': Twitter rides out Kellyanne Conway's use of flash cards on Fox interview 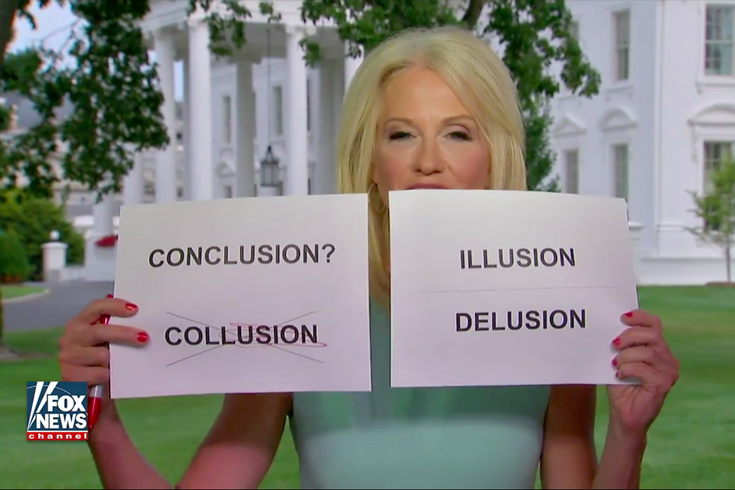 Counselor to the President Kellyanne Conway holds up signs during a Fox News interview on Wednesday, July 12.

Kellyanne Conway, counselor to the president, appeared on Fox News on Wednesday night in an attempt to quiet talks about the possibility of collusion between President Donald Trump's campaign and the Russian government, and she used visual aides to drive home her point.

As she wrapped up an interview with Sean Hannity, Conway held up two pieces of paper. One had the word "conclusion?" above the word "collusion," which was crossed off. The other had the words "illusion" and "delusion."

"What's the conclusion? Collusion? No. We don't have that yet. I see illusion and delusion," she said.

Conway, who hails from Camden County, appeared on the show after Donald Trump Jr. tweeted out an email correspondence setting up a meeting between himself and a Kremlin-connected official in response to a report from The New York Times earlier this week.

"Sesame's Grover 'word of the day,' perhaps, Sean, because you're absolutely right: To date, they basically set out this Venus flytrap and thought, 'One day, we'll catch something eight months later,'" she said on the show.

.@KellyannePolls: "What's the conclusion? Collusion? No, we don't have that yet." #Hannity pic.twitter.com/hWLQ9WPpc3

Conway's use of props caught the attention of social media users, who took full advantage of the opportunity – similar to when Twitter users doctored videos of Trump holding executive orders to show everything from a "kat" to a Pokémon card collection.

A Twitter account dedicated to sharing the images, called @TrumpDraws, is still riding out that meme wave.

As one Twitter user who watched Conway's interview put it, "a meme [was] born" Wednesday.

Some of them, of course, tackled Trump and related politics.

Oh Kellyanne Conway... what a rookie move.
You left Alternative Paper up there!
It's OK, we'll learn ya.#ThursdayThoughts pic.twitter.com/48LadFhPiH

I think Kellyanne Conway is trying to tell us something. pic.twitter.com/u4ydrOdFcz

Others corrected grammar while another cited lyrics to Fergie's 2006 hit, "Fergalicious."

Kellyanne Conway is really getting to the bottom of this, guys. pic.twitter.com/zNhNHEx99w

Conway responded on Twitter on Thursday, offering her "apologies to the humorless."