Memorial Day marked with flags and a stirring image

Taking a moment to remember the fallen 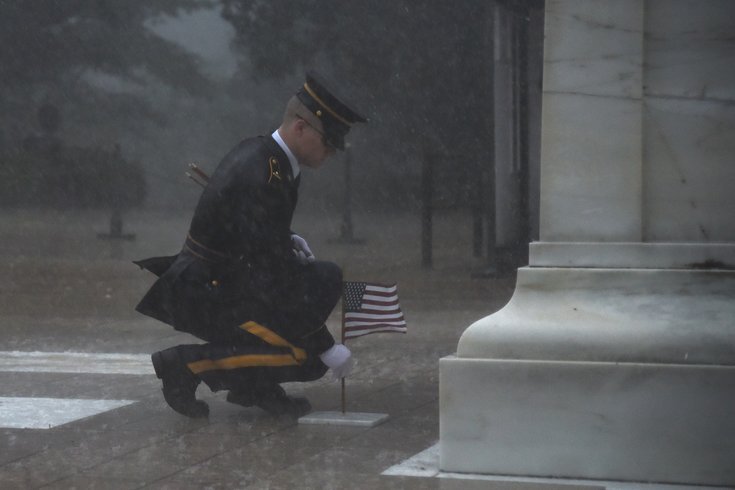 From the deck of the U.S. New Jersey to Philly's Bridesburg neighborhood to Laurel Hill Cemetery, people gathered on this Memorial Day to remember those who fought and died while in this country's uniform.

At 3 p.m. local time, the nation took a moment during the National Moment of Remembrance, the time when the country is asked to pause for one minute in honor of the fallen. Major League Baseball games halted play at that time and Amtrak trains reportedly blew their whistles.

In the Garden State, the battleship U.S. New Jersey held a ceremony at the forward deck with a performance of TAPS and the casting of a memorial wreath into the Delaware River.

Bridesburg once again held its traditional Memorial Day parade down neighborhood streets - similar to small town and neighborhoods throughout the country.

Flags were posted throughout Laurel Hill Cemetery in honor of 2,400 veterans -- from the Civil War to Vietnam -- buried there.

In preparation for the Memorial Day observance, U.S. service members went to each gravesite at Arlington National Cemetery in Washington D.C. to plant flags. But heavy rains, winds and lightening suddenly made the duty hazardous.

Still, some refused to back down, including a member of the 3d U.S. Infantry Regiment, otherwise known as The Old Guard, the oldest active-duty infantry regiment in the Army. A Facebook picture of a Tomb Sentinel, a soldier in charge of guarding the Tomb of the Unknown Soldier, planting a flag in the dangerous weather, went viral, with more than 250,000 views and 17,000 comments.

The Old Guard posted the photo and described the scene below. And to get a full flavor of what happened, a video is also posted below. Best to listen to it with the sound on to get the full effect:

Yesterday, torrential rain and drastic wind gusts overcame America’s most hallowed grounds. Visitors ran for cover. News media piled into vehicles together. The streets flooded. Trees as old as the cemetery itself broke at the trunk and came crashing down. But America's Regiment endured. They found low ground and held fast through the wind and the rain. Some had to be to ordered to stand down from planting flags, still determined to continue to honor the fallen.

During the storm, one of the most extraordinary displays of discipline and dedication to duty ever to be witnessed at Arlington National Cemetery was taking place at the Tomb of the Unknown Soldier. With only a few watching from cover, a Tomb Sentinel approached the Unknowns with U.S. flags in hand. As thunder shook the ground and rains washed down without abandon, the Tomb Sentinel pierced through the elements with breath-taking precision. He knelt and placed the flags in honor of the Unknowns. For the select few who saw this moment, it was jaw-dropping. Humans have their limits, but The Old Guard has yet to meet theirs.