Camille Fishel, who has two children with the Fanatics CEO, suffered minor injuries during the Fourth of July celebration 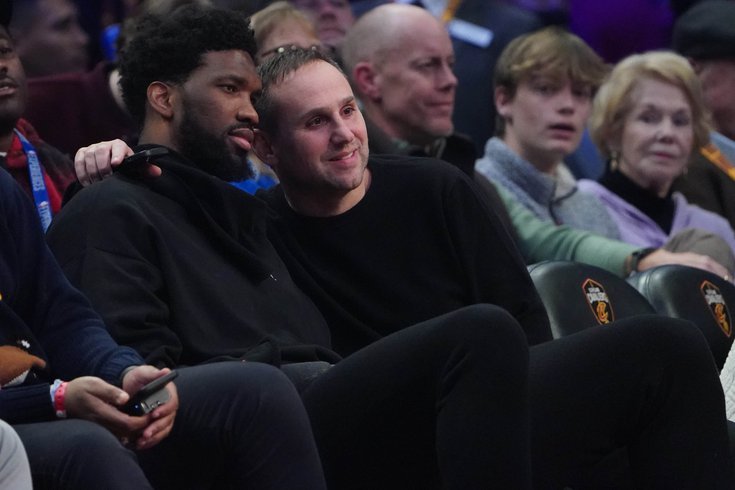 Michael Rubin, CEO of Fanatics and former limited partner of the Philadelphia 76ers, celebrated the Fourth of July with a star-studded party in the Hamptons. He's pictured above with Joel Embiid, who attended the celebration.

Fanatics CEO Michael Rubin had a monster Fourth of July party in the Hamptons on Monday, hosting an All-Star guest list of NBA players and musical performers at his $50 million Bridgehampton estate.

The former Philadelphia 76ers limited partner, who recently sold his ownership stake in the team, was pictured in photos with everyone from Joel Embiid and Tyrese Maxey to Drake, Meek Mill, Diplo and Lil Uzi Vert. The holiday party was largely a success, except for a brief hospital visit for Rubin's girlfriend, Camille Fishel.

On Instagram, Rubin, 49, said Fishel "has a few bruises and a very bruised ego" after she fell from a stage onto her face during the party.

PageSix shared few photos of Fishel at the hospital with bruises on her face and wearing a neck brace.

Fishel, who has two children with Rubin, was in good spirits about the incident. After giving birth to their second child a few weeks ago, she acknowledged the party was a lot for her to handle.

Rubin also has a daughter with his ex-wife, Meegan.

There doesn't seem to be any footage out there of Fishel's face plant — at least not on social media, at this point. That's probably for the best.

MORE NEWS: Storylines to watch for Sixers at Summer League 2022

Scenes from the party show guests decked out in white summer attire on a spotless day in New York.

Kevin Durant's agent, Rich Kleiman, was in attendance and prompted some speculation that perhaps the Sixers front office could take the occasion to schmooze about acquiring the Nets superstar.

Just don't deal Maxey to make it happen, or else this poor kid is going to cry forever.

Told my 8 year old son that there is a rumor that the @sixers may try to trade for Durant. He was excited. I then told him that they would have to include @TyreseMaxey in the trade and this happened…. pic.twitter.com/2x8FEDWPet