New dining destinations are part of major development in the city 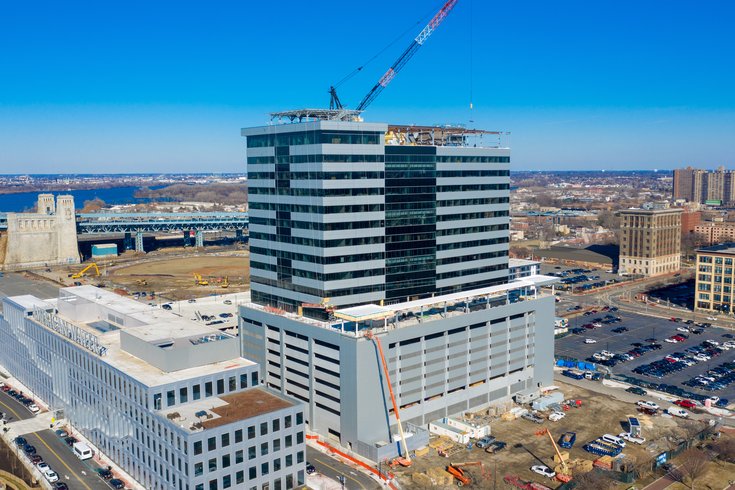 The new waterfront development in Camden.

Celebrated chef Michael Schulson will open two new restaurants on the Camden waterfront in the fall of 2019.

The Philadelphia restaurateur will reveal the dining concepts in the coming months, it was announced Thursday.

The Schulson Collective will develop and manage the restaurants as part of the development of the corporate headquarters for NFI, Conner Strong & Buckelew and The Michaels Organization and the first new market-rate residential development in decades.

The announcement was made by a trio of partners on the development: George E. Norcross III, executive chairman of Conner Strong and chairman of the board of trustees of Cooper University Health Care/MD Anderson Cancer Center at Cooper; Sidney Brown, chief executive of NFI; and John J. O’Donnell, CEO of The Michaels Organization.

“We are excited to have Michael Schulson bring his culinary vision to Camden as our partner in two new restaurants,” Norcross said. “His talent, vision and business savvy will be key to Camden’s continued revitalization and adds an important next step in Camden’s renaissance.”

Brown and O'Donnell said they shared that excitement.

“Camden continues to grow and revitalize in ways that were unimaginable just a few years ago and being able to attract a renowned restaurateur like Michael Schulson is clear proof of the direction Camden is heading,” Brown said.

“When we announced that The Michaels Organization was moving its headquarters to the Camden waterfront," O'Donnell said, "I said we were eager for our employees to experience all the wonderful things that our new headquarters will provide and these new restaurants are exactly what I’d hoped for.

“The city has a very bright future and I look forward to our firm calling it home and celebrating its successes at the new Schulson restaurants,” he added.

Schulson opened his first restaurant, Izakaya, at the Borgata in Atlantic City in 2008.

“We look forward to introducing exciting and unique new dining experiences to the community in Camden,” Schulson said. “We are inspired to have teamed up with a group of terrific individuals who share our belief in the transformational power of economic investment.”

Prior to starting his own company, Schulson worked at Philadelphia’s Le Bec-Fin and Susanna Foo, then led kitchens at Buddokan in New York City and Pod in Philadelphia and traveled to Japan. In 2018, he and fellow chef Jeff Michaud bought Osteria on North Broad Street from Urban Outfitters.

Schulson and his team soon will debut Alpen Rose, a steak boutique on 13th Street in Midtown Village, next to Double Knot.

The companies led by Norcross, Brown and O'Donnell will move their headquarters into the $245 million waterfront building, bringing nearly 1,000 new jobs to the city. In addition, the leaders and their families have invested millions more to develop new apartments along the Delaware River.

Conner Strong & Buckelew is one of largest insurance and employee benefit brokerage firms in the nation, NFI is a leading global supply chain solutions provider, and The Michaels Organization is a national leader in residential real estate.

“We’re seeing a true community of investment build up around Camden and its future,” Brown said. “And with Michael Schulson’s help, our vision for a neighborhood with world-class amenities and a thriving economy is taking shape.”

Full disclosure: PhillyVoice Founder and CEO Lexie Norcross is the daughter of George E. Norcross III, executive chairman of Conner Strong & Buckalew and chairman of the board of trustees of Cooper University Health Care/MD Anderson Cancer Center at Cooper.