A winter storm watch is now posted, and could be upgraded in the next 48 hours 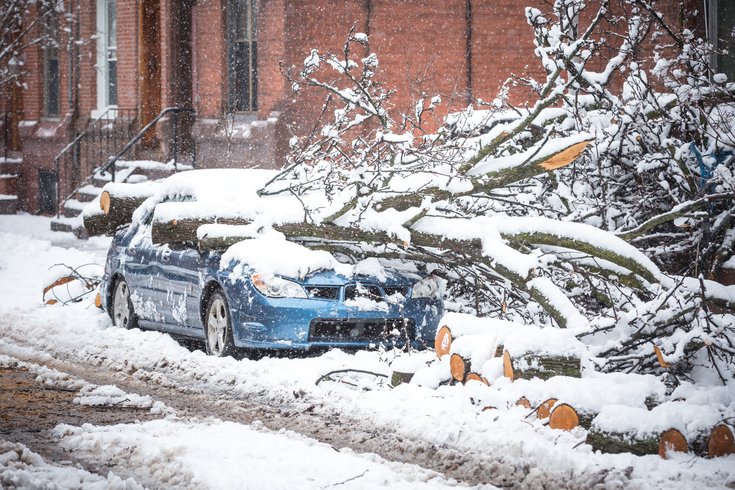 A tree that had fallen previously on North 23rd Street collects snow during a March 7, 2018 nor'easter.

A massive storm is on the way midweek that could create a host of problems for travelers across the Philadelphia region.

A winter storm watch was declared Monday afternoon for the entire Delaware Valley – effective from Wednesday morning to Wednesday night.

The storm will arrive from the south late Wednesday morning with an initial outburst of snow, according to the National Weather Service. In its morning discussion, forecasters were predicting accumulation of 2-3 inches (the city) to 4 inches (Chester County). In issuing the winter storm watch, however, they nudged accumulations to 3 to 5 inches of snow, with higher amounts in the western suburbs.

Accu-Weather sees accumulation totals a bit higher, with 3 inches in the city and as much as 6 inches of snow in some places west of the city.

Sleet and freezing rain will gradually mix in with the snow. With the latest update, it appears the region will now see a prolonged period of freezing rain – not the all-rain in earlier forecasts – on Wednesday night and perhaps into Thursday morning, the weather service said. A glazing of ice is possible.

The weather service noted that there is much uncertainty right now about expected snow and ice accumulations, noting the speed of transition to a mix and then rain could have significant impact on accumulations. Its forecast represents a compromise between one model, the Global Forecast System, or GFS, which shows just 2 inches of snow, and another model, the North American Mesoscale Forecast System, or NAM, which shows a half-foot of snow in Philadelphia, forecasters said in the afternoon weather discussion. 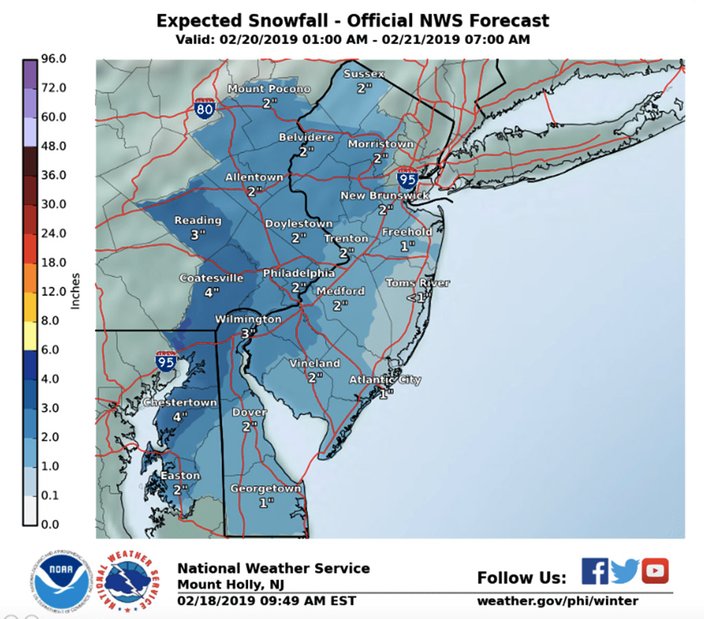 One thing seems for sure: travel is expected to be difficult during the storm, with low visibility and slippery snow-covered streets, and forecasters urged extreme caution. The wintry mix will perpetuate slick conditions on cleared roads and sidewalks.

The storm could lead to delays and cancellations at Philadelphia International Airport, where deicing operations and low visibility conditions can be expected, AccuWeather cautioned, noting that other Mid-Atlantic hubs such as New York, Washington and Boston will see similar problems.

According to Accu-Weather, the "massive" storm will affect 200 million Americans in 39 states beginning Tuesday. Heavy rain and flooding is forecast in southern states.

Monday night: Mostly clear, with a low around 25. Northwest wind 6 to 16 mph.

Tuesday night: A slight chance of snow after 4 a.m. Increasing clouds, with a low around 26. Northwest wind 5 to 8 mph becoming calm in the evening. Chance of precipitation is 20 percent.

Wednesday: Snow before 5 p.m., then rain, snow, and sleet. High near 35. East wind 5 to 7 mph. Chance of precipitation is 90 percent. New snow and sleet accumulation of 1 to 3 inches possible.

Wednesday night: Rain and sleet, becoming all rain after 8 p.m. Low around 34. Chance of precipitation is 80 percent. New precipitation amounts between a quarter and half of an inch possible.

Thursday: A chance of rain before 1 p.m. Partly sunny, with a high near 54. Chance of precipitation is 40 percent.

Friday night: Mostly cloudy, with a low around 33.

Saturday: A chance of showers. Mostly cloudy, with a high near 46. Chance of precipitation is 50 percent.

Saturday night: Showers likely. Cloudy, with a low around 37. Chance of precipitation is 60 percent.

Sunday: Showers likely. Mostly cloudy, with a high near 52. Chance of precipitation is 60 percent.