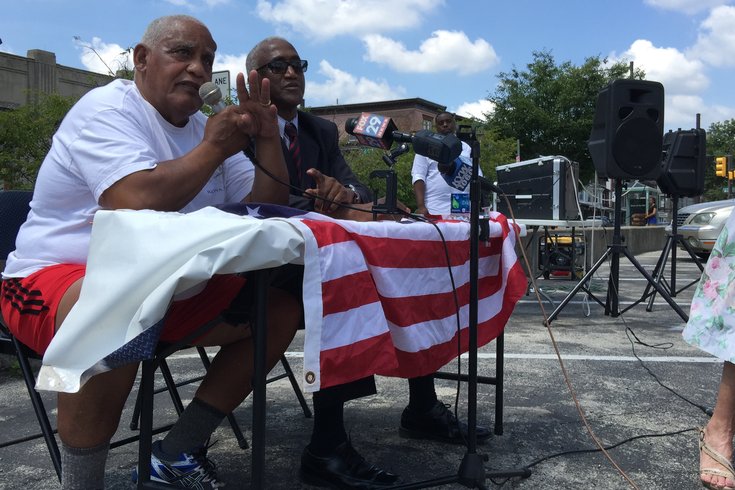 The press conference started with a simple question that one of the hosts asked himself into a microphone while sitting at a flag-draped table near 22nd Street and Lehigh Avenue.

Instead, the man who has been a Democrat, Republican and Independent at various points during his political career, said he’d advise the campaign of James Jones, the GOP candidate for a Second District Congressional seat soon-to-be vacated by 11-term incumbent Chaka Fattah.

But don’t think for one second that this was the biggest reveal to come from Street, who indicated just last month that he’d run in the race as an independent candidate.

Nope, that came after Street introduced Jones as a man who’s trained Navy SEALS, was a top 10-ranked kickboxer and earned a black belt in Kung Fu.

Those bonafides led into the announcement that Street’s long bandied-about (by Street) “414 Community Movement” to hire 5,000 residents to serve as a back-up law-enforcement organization is a (sorta) go.

“It’s OK not to shoot and kill somebody. We’re going to teach people those unarmed, self-defense skills that will help them do their jobs in this community.” – James Jones, Republican candidate, Second Congressional District

The application and interview process to be part of that organization – for which funding remains wholly uncommitted outside of contacting private donors like the Jim Brown Foundation and working on an application for federal grant dollars – will start in the shopping center at 11 a.m. Tuesday.

With that, the already surreal congressional race turned even more surreal.

Street’s redefined role as campaign chairman for a Republican candidate has already ruffled intra-party feathers via Jones’ public embrace of his new supporter making the Facebook rounds earlier this week.

That’s nothing new, Street raising eyebrows. He’s been doing so in recent months by chiding the one-party system that’s overseen decades of abject poverty in the city. What’s truly unique about this latest chapter is Street’s announcement that they will start training “414 Community Movement” employees in Fairmount Park early next month.

Chiding the press for being “very unfair” to Jones’ candidacy, Street drew a parallel to writing off Donald Trump's chances in the GOP presidential race.

“He will do what is necessary to stop this violence,” Street said of Jones, who called this “unique” event “a very critical point in my campaign.”

Jones said he’s long admired Street, with whom he shares “a great deal of passion and love for this city.”

“This is an event that’s going to change the political dynamics in Philadelphia,” said Jones, noting that he’s been unsuccessful in his attempts to schedule a debate with Evans. “We got to do something different than what we’ve been doing already. We’re gonna make [changes] right now. I have a commitment to see it through.”

To Jones, it’s all about jobs and addressing crime, which is where his Kung Fu background – not to mention status as a “different kind of Republican” – comes into play. 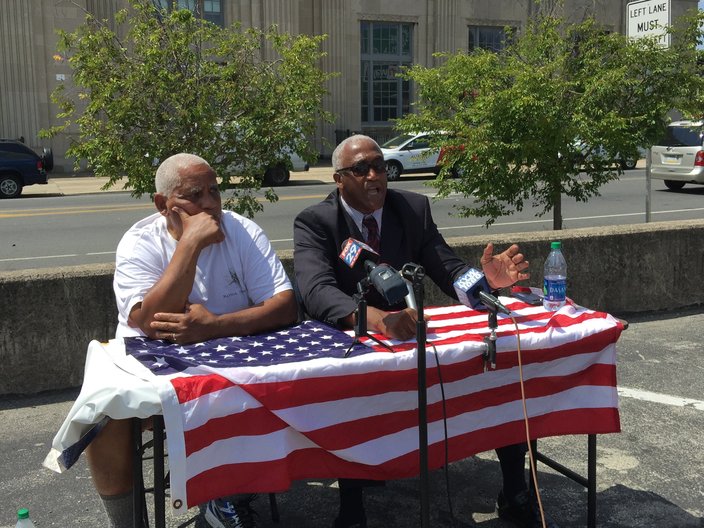 When the press conference arrived at its Q&A phase, PhillyVoice asked for some clarification as to whether they would be training people in the martial arts to patrol city streets.

To that, Jones referred to lessons he instilled in Navy SEALS and underwater divers.

“What I taught them to do was to deploy skills only on an as-needed basis, and maybe that’s what should happen with a lot of our police officers,” he said. “They need to have those skills that they can withdraw. You don’t have to shoot them every time. It’s OK not to shoot and kill somebody. We’re going to teach people those unarmed, self-defense skills that will help them do their jobs in this community.”

Street said job announcements have already been posted throughout the district and they’ll accept applications from interested parties starting next Tuesday.

“By Aug. 1, we should have applications from every police district across the Second Congressional District. By the time we start our training in Fairmount Park, when Dwight Evans sees the number of people we’re drawing, oh, he’s gonna debate. Trust me,” Street predicted. “Politics is people. When we get people, the press is going to come, because it’s news that we have people dealing with a (political) party that they haven’t dealt with in 64 years.”

Street couldn’t answer queries about the number of people to be hired and how it’s possible to fund 414 Community Movement pilot-program employees. Instead, he talked about the cost of incarcerating people as compared to employing people and that they’d ideally be paid $12 an hour ... eventually.

“This is a program that we’re putting in place to be funded,” responded Street, who said he wouldn’t run the program, but serve as a “facilitator” to put it in place. “The people [who] come down here for jobs, we’re going to explain to them what the process is.”

Then, he delved into his penchant for being a distraction in political campaigns.