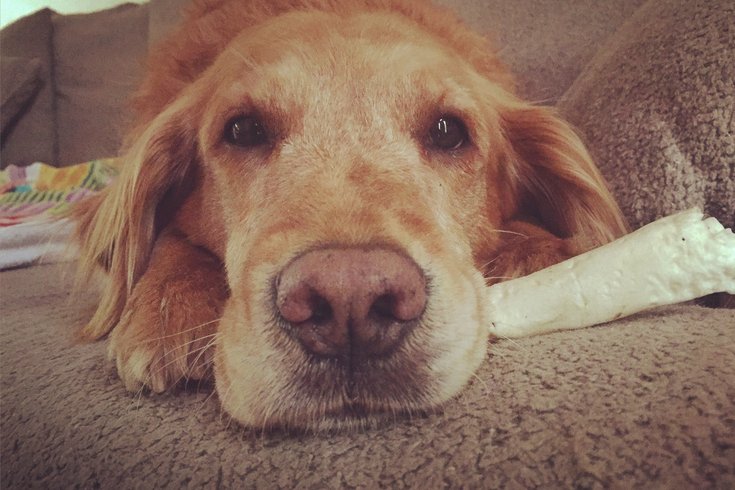 Bella, an 8.5-year-old golden retriever, got spooked by fireworks after the Eagles won the Super Bowl and took off running from her Point Breeze home. She hasn't been seen since 1:30 a.m., Monday, February 5, 2018.

A gentleman named Declan Gormley was eating "lunch in a van" early Tuesday afternoon and saw Bella go running by on the 1500 block of Taylor Street, less than a half mile away from her home.

"She was going into houses along Ringgold Street, went in there and, luckily, she got jammed between broken fence. I sat for a while and didn’t want to leave," he said. "I made a makeshift leash from piece of old rope, hooked it onto the eagles scarf, got her out and took her down to the park on Wharton.

Said Bella's owner Blake Fleischer, "I am over the moon and beyond the stars happy. She's a little hurt, but is otherwise OK."

Happy days, indeed, as you can see below in the video of Bella and Fleischer's reunion.

When Blake Fleischer moved to Philadelphia from Las Vegas in 2012, just one "partner in crime" accompanied her on that cross-country trip.

Her name is Bella, the Golden Retriever for whom Fleischer has cared since the 8.5-year-old dog was just a six-week-old pooch.

RELATED STORY: Six reasons having a dog is good for your health

To understand why Fleischer fought back tears during a Tuesday morning phone conversation, you need to go back to about 1:30 a.m. Monday, when Fleischer returned to her Point Breeze home after celebrating the Philadelphia Eagles Super Bowl victory on South Broad Street.

When Fleischer opened the front door, Bella darted out – wearing only an Eagles handkerchief. Fleischer, who was planning to put Bella's collar on and take her for a wee-hours walk, has not seen the dog since.

"I went running after her, but she was gone," said Fleischer, who lives near Wharton Square Park at 23rd and Wharton Streets. "A man sitting in a car saw a woman go up to her, but Bella looked scared, growled and took off."

Fleischer said it's out of character for Bella, who is not microchipped, to run off like that. She hasn't done so since she was a puppy, which is a characteristic of most puppies.

She thinks the fireworks that erupted in the aftermath of the Eagles' win over the Patriots must have spooked Bella. In the hours and days since, Fleischer has papered the neighborhood with flyers and turned to ACCT Philly and the Pennsylvania SPCA for help at the suggestion of Fox29's Lucy Noland.

She hopes that someone will see Bella and get in touch with her in an effort to bring her beloved dog home.

"She could be shy when she's around you, but it's her life mission to just get petted by somebody," said Fleischer. "She's a loving, cuddly dog. She's like a mini-person. You know how people say dogs take on the personality of owners? Well, people always say, 'Oh my God, she's just like you.' This isn't something Bella would normally do."