MLB free agency: A half-dozen pitchers for the Phillies

A word of warning: You’re going to hate this list, most likely.

Neither Jake Arrieta or Yu Darvish are listed, mostly because I agree with the Pat Gillick philosophy of not giving veteran pitchers contracts that exceed three years, particularly with pitchers over the age of 30 (with plenty of mileage on their arms). And, yes, I do believe there are exceptions to this rule, I just don't see one this year.

Here in Philadelphia alone we’ve seen pitchers begin to fade in their early-to-mid 30s (remember what the 2011 rotation of aces looked like in 2014?). Even Cole Hamels (who turns 34 next month) saw his numbers begin to trend in the wrong direction last season.

Perhaps a guy like Arrieta is the exception to the rule. But there’s real risk in giving him a Cliff Lee-like contract, and it’s probably money better spent on more projectable position players next winter while using your prospect inventory to trade for a young, under-club-control starting pitcher.

When you look around baseball and see Jordan Zimmermann, James Shields, Johnny Cueto (at least last year) and Jeff Samardzija (who had some decent peripherals, but is still under contract for two more years) and the money they got and the production they’d put forth since, it doesn’t exactly make you feel bullish about doling out dollars in the excess of $100-200 million for veteran pitchers. And if you are going to take that kind of plunge, you absolutely have to do it when you know you’re going to contend in the upcoming year, otherwise, you’re increasing the risk of wasted dollars.

Phillies team president Andy MacPhail said himself that the Phillies wouldn’t be chasing unicorns this winter, so, let’s just get back to a list you’re hardly excited about at this point.

Before we go any forward with this exercise, we’ll note, as we did yesterday with free agent hitters, that these are simply six pitchers who are free agents this winter. We are not using this space to report that the Phillies have interest in the following players; we’re using it to suggest a half dozen pitchers that could potentially fit into the Phillies plans for 2018.

Players listed in no particular order:

Sure, after spending some 300 words explaining why it’s not always wise to sign a pitcher older than 30 to a multi-year deal, we’ll start by recommending just that. The difference here, though, is that it’s difficult to imagine Cobb demanding a contract north of, say, $90 million in dollars and three or four in years. He’s a somewhat recent Tommy John survivor and his track record isn’t nearly as long as some of the other starters on the market, like Arrieta, Darvish, and Lance Lynn. You could look at the plus side of not having as long a track record, too: Cobb has put just 700 innings of mileage on his arm in his career.

Jon Heyman of fanragsports.com has Cobb in line for somewhere in the mix of 4-5 years and $58-75 million. If you could get it done for 4-64, is that a risk worth taking when you have payroll flexibility and a desperate need for competent starting pitching? One catch: since Cobb (like Lynn) received a qualifying offer, the Phillies would forfeit a second-round pick if they signed him.

One of the five players drafted before Andrew Miller and Clayton Kershaw went back-to-back in the 2006 draft (a draft that also saw Max Scherzer selected 11th overall), Morrow has battled injuries and inconsistencies but, like Miller, looks to have reinvented himself into a versatile relief ace. Such pitchers are valuable in a game that’s trending ever so slightly away from managing by the book with a bullpen – your closer doesn’t necessarily have to be your best reliever and you might have just as much success putting your best relief pitcher into high-leverage situations in the sixth or seventh inning on any given night. Morrow was near-dominant in that role in 2017 with the Dodgers, with an average fastball a tick under 98 MPH. Since he doesn’t have a long track record, he’s unlikely to get grossly overpaid. Would you feel comfortable giving him, say, 3/26 to solidify an already strong and improving Phillies ‘pen?

Reunited and it feels so good? Neshek talked about how happy he was pitching in Philadelphia when he was traded to the Rockies in July, and unless a contender gives him a multi-year deal, perhaps he would be a fit as a glue guy in the ‘pen, someone who can fit anywhere into the game between the fifth and eighth innings, complementing the likes of Edubray Ramos, Luis Garcia, and Adam Morgan with his funky delivery (diverse arms that throw from different arm slots are underrated in a bullpen). Neshek had a 1.59 ERA, 0.86 WHIP, and a 69-to-6 strikeout-to-walk ratio in 62 1/3 innings between the Phils and Rockies. 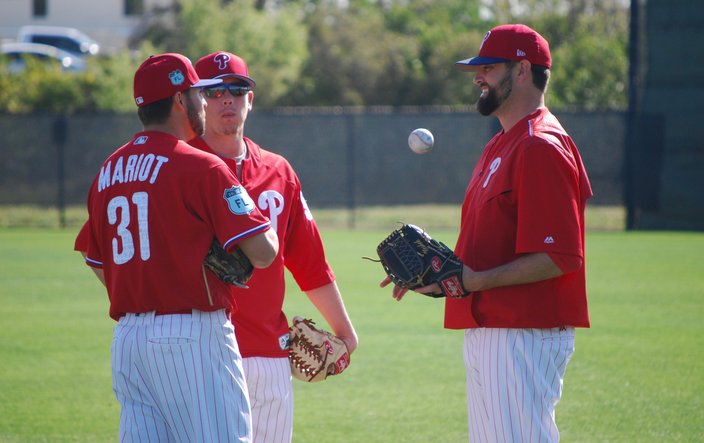 Remember that time this spring when Pat Neshek showed his teammates how he could levitate a baseball with his beard?

Would you give the 37-year-old a two-year deal? Another former Phillie (ok, he was only here for that weird week in September) that could make some sense and is six years younger than Neshek: Juan Nicasio.

Perhaps one of the more underrated relievers in baseball over the last decade: since his debut in 2010, Cishek has finished a season with an ERA above 3.50 just twice in eight seasons. And he has experience as a closer. And he had a 2.01 ERA with a 0.89 WHIP between Seattle and Tampa Bay last season. With a long track record, he’ll surely be looking for at least three years. Maybe that’s beyond what the Phillies are comfortable with for another glue guy-type for their ‘pen. But then again, the Phillies spent $14 combined on Neshek and Joaquin Benoit last season. Cishek, 31, is pretty much the exact opposite of someone like Edubray Ramos: he won’t light up the radar gun but you know exactly what you’re going to get (and this is hardly a bad thing).

A left-handed starting pitcher. Remember when the Phillies used those? It’s difficult to imagine the Phillies will go another whole season without a left-hander starting a game, and Garcia kind of fits the Jeremy Hellickson-Clay Buchholz-Charlie Morton role as a bargain bin, bounce-back candidate (yes, two of those guys didn’t even last a month with the Phillies due to injuries). It should also be noted that those other three pitchers were also acquired in salary-dump trades and not free agency. Garcia is only 31 and had some pretty good years with the Cardinals in the not-too-distant past.

The Phillies spent $17.2 million on Hellickson for last year alone. Would you give Garcia somewhere in that neighborhood, total, for a two-year deal? Yeah, the Phillies could probably do a lot better, but trading for the likes of Chris Archer or Gerrit Cole is easier said than done, too. If you're not a Garcia fan, how about taking a shot with Francisco Liriano, particularly if you can hire pitching guru free agent Jim Benedict, who already revived Liriano once in Pittsburgh.

Adam Morgan was one of the best left-handed relievers in baseball in the final two months of the 2017 season. It wouldn’t be a terrible idea to put another lefthander with similar strikeout and strikeout-to-walk rate numbers in the same bullpen, would it? There’s a lot to like about McGee. He’s a lefty with an average fastball in the mid-90s, he’s shown he can pitch for more than an inning/three outs at a time, and he can pitch in pretty much any inning from the sixth through the ninth. Like Cishek, the 31-year-old McGee has a long enough track record of success that he’d probably be seeking a three-year deal. Notable: McGee had a 0.88 WHIP and didn’t allow a home run in 32 games away from Coors Field last season.