Wanted: Pitching coach. A half-dozen names for Phillies to consider 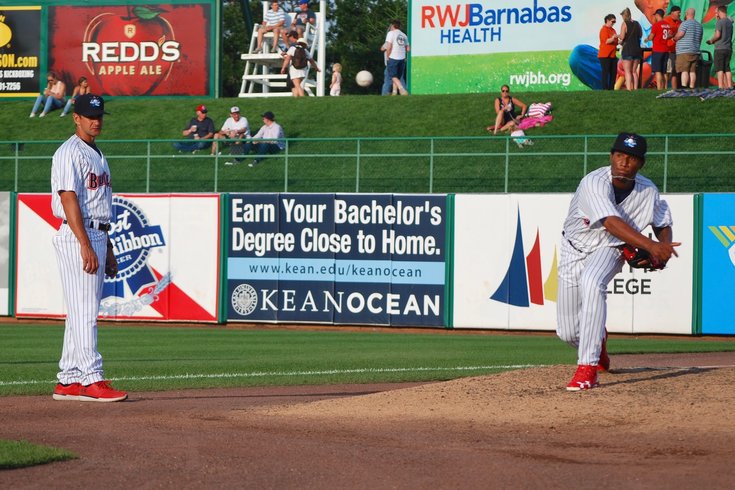 Lakewood BlueClaws pitching coach Brian Sweeney watches Phillies prized prospect Sixto Sanchez throw before a start in July. The BlueClaws top six starters combined for a 2.51 ERA in 104 starts this season. The Phillies could do a lot worse than find Sweeney a job on the major league coaching staff.

Baseball’s offseason has been well underway for a couple of weeks now and the unofficial start of the hot stove league arrived on Monday, when the sport’s dealmakers arrived in Orlando, Fla., for the annual General Manager’s Meetings.

Even if they don’t strike a deal in the day few days, the Phillies could begin legwork on some roster movements, perhaps on a trade later this winter that subtracts infield depth for proven starting pitching, maybe with some dialogue with the agent of a difference-making free agent.

The Phillies have other business to take care of, too, namely putting the finishing touches on first-year manager Gabe Kapler’s coaching staff.


On Friday, the Phillies got the composition of that coaching staff started when they announced the hiring of hitting coach John Mallee (formerly of the Cubs and Astros) as well as the promotion of Dusty Wathan (from Triple-A Lehigh Valley manager to major league third base coach). Additionally, Rick Kranitz (who worked as both a bullpen coach and assistant pitching coach in the last two seasons) was retained from Pete Mackanin’s coaching staff.

Of the jobs still open on the coaching staff, two seem to loom rather large: pitching coach and bench coach. The bench coach is often the right-hand man to the manager, and with Kapler’s inexperience in the position (he was never on a major league coaching staff and managed for just one season 10 years ago in A-ball), it stands to be a crucial hire.

But with the makeup of the Phillies roster (teeming with young, mostly inexperienced pitchers) and farm system as a whole (the pitching depth from Double-A and down is impressive) it says here that the pitching coach job will be the most important in how quickly the Phillies can get the most out of the talent that they have and contend again.

It’s possible that they already have that hire. The Phillies did not announce what Kranitz’s job title will be in 2018; he’s been a big league pitching coach for three teams, most recently the Milwaukee Brewers (2011-15).

But wouldn’t they just have announced him as the pitching coach then?

Here is one man’s list of six intriguing candidates for the still-vacant pitching coach position:

So a major league manager who is coming off back-to-back division titles would take a demotion to join a rebuilding Phillies team as a pitching coach? Yeah, it sure doesn’t sound like the most likely or obvious pick, but Farrell did interview for the managing job that went to Kapler and the Phillies' decision-makers obviously liked him enough that he was among the three finalists for the position with Kapler and Wathan. So there would obviously be interest from the Phillies end. Unless Farrell wants to move into a front office role, the Phillies pitching coach job would allow him to stay in a big league dugout. It’s not crazy for an established manager to take a reduced role at some point: long-time Twins manager Ron Gardenhire worked as a bench coach in Arizona this past season before being hired as the new manager of the Detroit Tigers last month.

Both Kapler and Klentak have said that they expect the coaching staff to be diverse – with coaches both young and old, experienced and inexperienced – and Peterson would surely balance out the new manager. The 63-year-old Peterson most recently worked as the director of pitching development for the Baltimore Orioles and began working as a big league coach 33 years ago as a bullpen with the Pirates. Peterson has worked as a pitching coach with the Athletics, Mets, and Brewers. And just because he’s older doesn’t mean he’s not progressive: Peterson introduced biomechanics analysis to the Orioles in an effort to maximize performance and reduce the risk of injury.

The 56-year-old Benedict surprisingly became a coaching free agent at the end of the 2017 season, just two years after the Miami Marlins thought enough of the former Pittsburgh Pirates pitching guru to hire him away even though they had to send compensation back to Pittsburgh for plucking him from their organization. Benedict played a vital role in helping the Pirates end a 20-year playoff drought as a pitching instructor who helped build and rebuild the likes of Francisco Liriano, Edinson Volquez, A.J. Burnett, Charlie Morton, J.A. Happ, and Mark Melancon into impactful pitchers. The Phillies tried to hire Benedict as pitching coach four years ago but were rebuffed by the Pirates.

When former great teams have dreadful seasons, someone usually takes the blame, even if it’s not their fault. Charlie Manuel and Rich Dubee were the celebrated manager and pitching coach of the last great Phillies teams, but were among the first out the door when the good times ceased and the rebuild began. Perhaps Dave Righetti is due for a break: he worked as the San Francisco Giants coach for 18 straight seasons before he was removed from his job and pushed into a front-office role (which, if you read the link above, sure sounds like a demotion. See: Mackanin, Pete). But with three World Series rings in the last decade, you’d also have to imagine teams are eager to add him to their organizations in some capacity.

A candidate the Phillies interviewed the last time they had a pitching coach vacancy (following the 2013 season, when Dubee was replaced by Bob McClure), Chavez joined the Phillies a year later, in October of 2014, as the organization’s minor league pitching coordinator. Chavez has worked in that capacity for each of the last three seasons and has a lot of fans within the front office and development staff for the work he’s done in that short time. The 49-year-old Chavez, the Seattle Mariners pitching coach in 2006 and 2007, joined the Phillies from the Los Angeles Dodgers, where he worked as a player personnel special assistant (2014) and a minor league coordinator (2009-2013).

Like Chavez, an internal candidate with coaching chops and many fans within the organization. Sweeney, 43, has worked in the last two season as the pitching coach at Low-A Lakewood, where a Who’s Who of the best pitching Phillies prospects have pitched during that time, including Franklyn Kilome, Adonis Medina, and Sixto Sanchez. In 2017, Sweeney’s BlueClaws pitching staff had a 3.28 ERA (third best in the South Atlantic League), a 1.15 WHIP (best in the league), and 3.39 K/BB ratio (third best). Sweeney’s top six starters in Lakewood (Sanchez, Medina, JoJo Romero, Ranger Suarez, Nick Fanti, and Bailey Falter were a combined 37-24 with a 2.51 ERA in 104 starts.

OK, we said a half-dozen. But we're going to add a bonus seventh intriguing candidate, free of charge.

Technically, Honeycutt isn’t a free agent and there might not be much chance of him becoming one. Clayton Kershaw might boycott spring training if he left (well, maybe not, but you get the point). Honeycutt has worked as the Dodgers pitching coach for the last 12 seasons, working under four different managers in L.A. (translation: he’s good enough and respected enough that he survived three managerial changes). But we’re listing him here anyway since nothing lasts forever, he has obvious ties here now with Kapler running the show, and because Dodgers general manager Farhan Zaidi left the door slightly open on a change at the pitching coach job when asked about it just a few weeks ago.