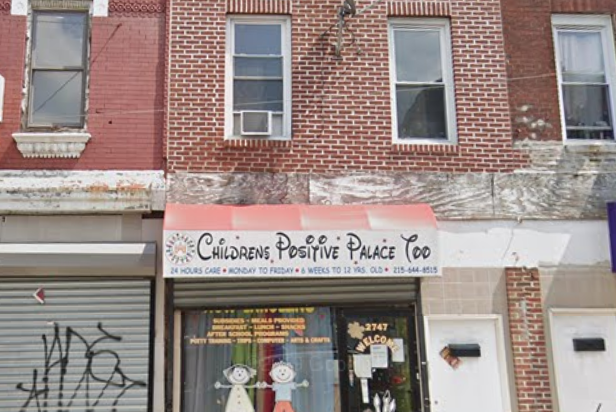 Philadelphia police have arrested a man who allegedly threw a Molotov cocktail at Childrens Positive Palace Too, a day care on Germantown Avenue.

A man allegedly threw a Molotov cocktail at a North Philadelphia day care Tuesday morning, an act that broke the facility's front window and ignited a fire outside the building.

The alleged incident took place at Childrens Positive Palace Too, located on the 2700 block of Germantown Avenue, at 9:04 a.m., police said. No children were inside at the time and no injuries have been reported. A suspect has been arrested.

Broken glass and burnt debris could be seen on the sidewalk in front of the day care, according to NBC10.

A fire marshal declared the incident arson. The fire did not enter the inside of the day care.

The suspect, who was wearing a black mask, fled the scene by getting into the passenger side of a white Toyota vehicle, police said. He was apprehended about a mile away, at the intersection of Allegheny Avenue and Second Street. The driver of the vehicle as not present when the arrest was made.

The suspect's identity has not been released.

An investigation is ongoing between the Philadelphia Police Department, the Philadelphia Fire Marshal’s Office and specialized federal agents from the Bureau of Alcohol, Tobacco and Firearms, according to CBS3. Investigators have already discovered several incendiary devices.

Police and fire Marshall on scene at a daycare on Germantown Ave.

Hearing someone threw something, possibly a Molotov cocktail, through window.

No one was hurt @NBCPhiladelphia pic.twitter.com/zSDLEobzDi


Police saying they arrested someone in what they’re calling an arson.

Say someone tossed a Molotov cocktail through the window of this daycare around 9am.

No kids inside @NBCPhiladelphia pic.twitter.com/PqDTWHl0sQ