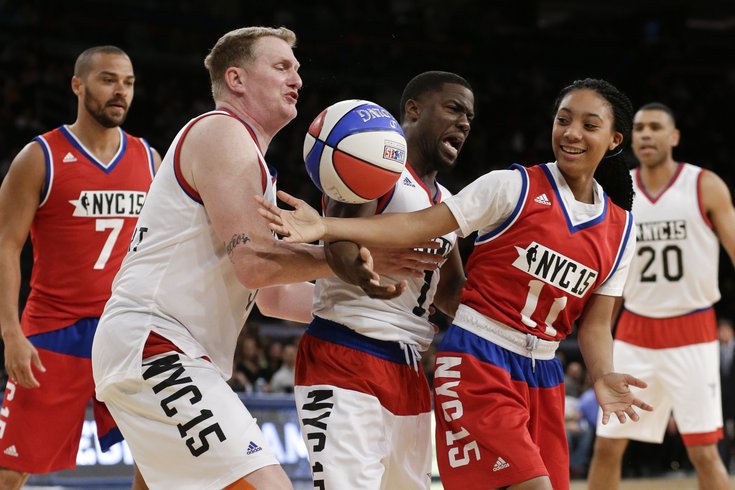 With Spike Lee, John McEnroe and other celebrities looking on, a pair of Philly guards* -- one a 5-foot-4, 35-year-old comedian; the other a 5-foot-4, 13-year-old eighth grader -- stole the show at Madison Square Garden on Friday night.

*Another Philly guard, Kyle Lowry, was in attendance as well. The Raptors star will play in his first All-Star Game on Sunday.

Can we just have Kevin Hart and Mo'Ne Davis play one-on-one?

In the first quarter of the All-Star Celebrity Game, Little League Word Series star Mo'ne Davis spun past MVP Kevin Hart for a layup so smooth it suggested this would't be her last time playing at the Garden.

Look at that left hand. She can ball.

Davis, who already plays for the varsity team at the Springside School and hopes to play in the WNBA some day, finished with four points and the play of the game. Perhaps the best part of her spin move past Hart was how she used her shoulder to create space. That's a veteran play.

The best part of that move is how Mo'ne Davis pops Kevin Hart with the shoulder to create space. That's a move. https://t.co/n42llzZTX4

Then, after Hart was called for a technical foul, Davis went to the line. And when she missed, Hart made sure to let her know about it.

This one's for @corrado_19 https://t.co/VanqH4XhkF

She would make a pair of free throws later despite the comedian's trash talk. And even though his East team fell to Davis and the West, 59-51, Hart was named MVP for the fourth year in a row. He finished with 15 points in the loss.

Perhaps Mo'ne modeled her game after another player from Philly:

Mo'Ne hates passing almost as much as Kobe does.

Tell me you wouldn't do the exact same thing...

Here are the highlights of the game-long battle between Hart and Mo'ne:

More on the game from Doug Feinberg of the Associated Press:

The game also included actors Anthony Anderson, Common, Nick Cannon, Sarah Silverman, Ansel Elgort, Chadwick Boseman, Jesse Williams and Michael Rapaport, who grew up in New York City. Williams, who stars on Grey's Anatomy, injured his knee with 5 minutes left in the game and was helped off the court back to the locker room.

NBA Hall of Famer and New York native Chris Mullin played as well as former New York Knicks' star Allan Houston. Current WNBA players Skylar Diggins, Tina Charles and Shoni Schimmel represented the league. Schimmel, who was the MVP of the WNBA All-Star game this past year, tricked Silverman — who was on the other team, to give her the ball under the basket which the Atlanta Dream star converted for a layup.

She led all scorers with 17 points.

Memphis Grizzlies owner Robert Pera also played, showing off his basketball skills. A few years back he tried to challenge Michael Jordan to a 1-on-1 game for charity that never developed.

Pera and Diggins finished with 13 points each to lead the West.

This was the first time that the celebrity game was played at an NBA arena.