Montco man to honor father by biking across Pennsylvania 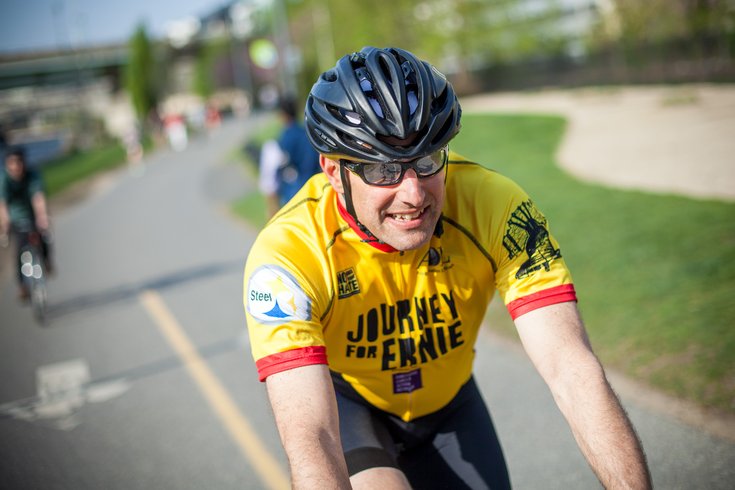 Edward Blumenthal says he maintained such a close relationship with his late father, Ernie, that he has little trouble determining how Ernie might react in any given situation.

So when Blumenthal imagines himself telling his father that he will spend three days later this week bicycling from Pittsburgh to Philadelphia, he receives a loving rebuke.

"In this particular case," Blumenthal said, "he would say, 'You're a total idiot and I'm proud of you. Go for it.' "

Blumenthal, 47, is biking the 374-mile trek to raise funds for both the Anti-Defamation League's Walk Against Hate and pancreatic cancer research. But the trip also provides him an opportunity to honor his father, a Jewish man who found a home in Philadelphia after escaping the Holocaust as a toddler.

Ernie Blumenthal became the first in his family to graduate college, earning his degree at Drexel Institute of Technology and embarking on a lifelong career as a certified public accountant. He founded his own practice, raised a family and spent years rooting for the Phillies.

"The concept I came up with was that his life started in horror and ended in horror," said Blumenthal, a Whitemarsh Township resident and executive vice president at Janney Montgomery Scott. "But in between, it was really, pretty good. I'm calling it 'The Journey for Ernie.'"

The journey will begin May 5 when Blumenthal and his riding partner, Brett Kligerman, bike across the Roberto Clemente Bridge into downtown Pittsburgh. From there, they will ride 106 miles along the Great Allegheny Passage into Cumberland, Maryland. After another 50 miles, they'll call it a day.

That 156-mile total is more than Blumenthal – an avid bicyclist, he tallies 4,000 miles each year – has ever biked in one day.

Day 2 features another 131 miles, and a trip across the Appalachian Mountains. By the time Blumenthal finishes the trek with 87 miles on Day 3, he'll have a group of friends escorting him into his finish along Northwestern Avenue in Lafayette Hill.

It's an opportunity to reflect on the life of his father, who supported his activity in the Anti-Defamation League, a civil rights organization that has fought against anti-Semitism and other forms of bigotry.

Blumenthal, who serves on the executive committee of the ADL's Eastern Pennsylvania/Delaware chapter, is asking people to support him by donating to the ADL and the sixth annual Walk Against Hate, scheduled for May 15 at the Navy Yard. He pledged to match up to $5,000 with a donation to pancreatic cancer research.

He has easily eclipsed that figure. As of Thursday, Blumenthal had raised $7,871.

It's all part of his effort to memorialize his father.

A MESSAGE OF INCLUSION

Born in Vienna in 1938, Ernie Blumenthal fled Austria with his mother, Kathe, in 1941. They found a home in Philadelphia, thanks to a wealthy, sponsoring family. On their paperwork for passage across the Atlantic, the box denoting their country read "unknown."

"Basically, they had no country," Edward Blumenthal said. "They were Austrian, but Austrians denied them. They had no country. They came here and, obviously, my father was still young so he was naturalized."

But Blumenthal's grandfather, Charlie, was not as fortunate.

A Polish-born Jew, he struggled to exit Austria. He tried escaping into Switzerland, but was arrested and jailed by the Swiss. Upon release, he managed to meander through Europe, eventually reaching England. Sometime around 1943, he was reunited with Ernie and Kathe in Philly.

Neither Charlie nor Kathe knew English when they arrived in Philadelphia. Ernie learned German before being taught English in kindergarten. He never spoke of experiencing any blatant discrimination in the United States, but Edward Blumenthal said Ernie imparted a message of inclusion. 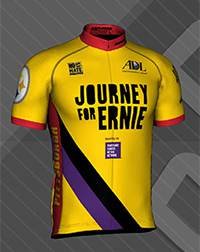 The official Journey for Ernie jersey.

"At one point, he spoke to my kids' Hebrew School," Blumenthal said. "He told a few stories about feeling as though he wasn't fitting in because he was different. But he was able to get through that and had really, good, close friends and persevered – even though my grandparents, for obvious reasons, never got over it.

"They lost a lot of family – brothers and sisters. It was a pretty bad time."

Years ago, Edward Blumenthal found his father's Vienna apartment during a college backpacking trip. In 1996, he returned there with Ernie.

"That was pretty emotional," Blumenthal said. "We spent just a half an hour standing in the lobby of the apartment building he was born in."

Several years later, Edward helped Ernie connect with cousins living in Switzerland and Israel. Jewish families had scattered during the Holocaust, depriving them of the family gatherings so many others take for granted.

"They were separated because they just fled," Blumenthal said. "There was nobody left in Vienna or Germany."

Blumenthal expects memories like that to come rushing back as he traverses Pennsylvania. For three days, he'll be doing nothing but biking, eating and sleeping – and doing a lot of thinking.

He'll carry everything he needs in a small pouch that he'll attach to his bike.

Its contents? An extra biking outfit, two pairs of socks, a T-shirt, running shorts, flip flops, a toothbrush and some toothpaste.