Delco man makes history in 58-day row across the Atlantic 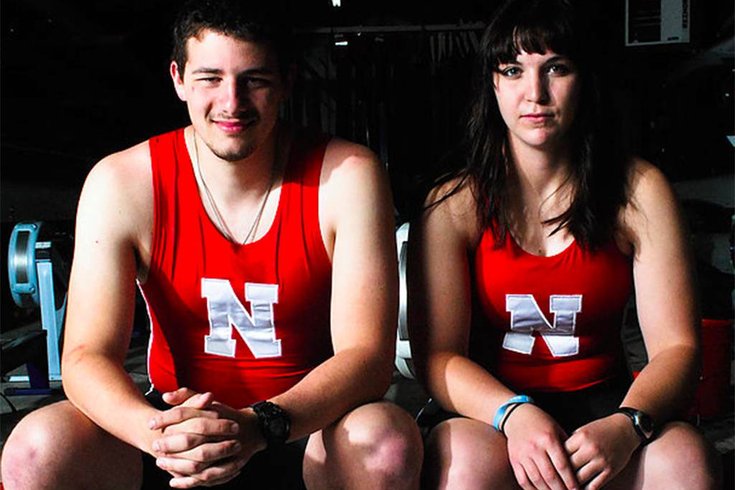 George Pagano and Caitlin Miller established world records for the youngest Americans and fastest mixed pair to row across the Atlantic Ocean during the Talisker Whisky Atlantic Challenge.

There were intervals when it was just him, the only one in the world, rowing under a starry night lit by a zillion sparkles bouncing off the middle of the Atlantic Ocean. The reflection was so vivid that you couldn’t tell where the sky stopped and the water began. It was moments like those that George Pagano will forever take with him.

That, and the curious 4-foot shark that followed his boat, Washington’s Crossing, along with rogue waves, breaching whales, errant flying fish, dolphin pods, hurricanes and a cargo ship that came within a nautical mile from almost prematurely ending his journey.

But Pagano, 23, a graduate of Holy Child Academy grade school in Drexel Hill, The Haverford School and the University of Nebraska, made it. He rowed across the Atlantic Ocean, completing the Talisker Whisky Challenge, billed as "The World's Toughest Row," with rowing partner Caitlin Miller, in 58 days, 5 hours and 6 minutes. The odyssey spanned from Dec. 20, 2015, in La Gomera, Canary Islands, off the coast of Africa, to the finish line in Antigua on Feb. 16, 2016.

Pagano and Miller, 24, rowed 2,747 nautical miles and placed 17th in the 26-team race, establishing world records for the youngest Americans and fastest mixed pair to row across the Atlantic Ocean.

Pagano’s inspiration for the trek was his maternal grandfather, Walter Benn, a United States Navy veteran who died of Lou Gehrig's disease when George was 11. Benn wasn’t too far from Pagano's mind when he needed to break away from the monotony of rowing at three-hour interludes with Miller. All he needed to do for a jolt was reach for a book that contained Benn’s dog tags. Pagano's trans-Atlantic trip helped raise $50,000 for the Greater Philadelphia Chapter of the ALS Association.

“The Talisker Whisky Challenge is a race, but most people just do it to get across, because that’s an accomplishment in itself,” said Pagano, who lives in Media, Delaware County, and rowed in high school and college. “When I was a freshman at Nebraska, I saw video from friends on the rowing team about this event. The race began in 1997 and used to be held every other year. After this year, the race will be held annually. My junior year, I started to get very interested, and Caitlin and I spoke to someone who competed in the race.”

Not many Americans participate in the race, simply because it is not well-known among U.S. rowers, but British rowers are heavily involved. Eight Americans competed this year, including Pagano and Miller, a team of four and another duo. 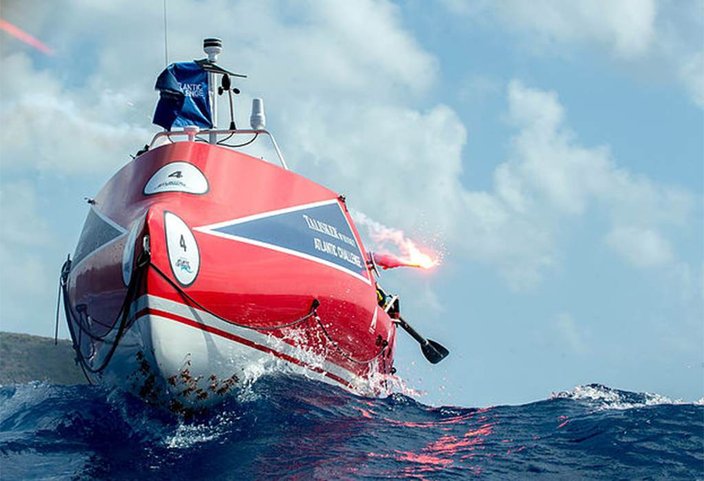 George Pagano rowed the Atlantic in the 23-foot-long Washington's Crossing.

'YOU HAVE TO BE A LITTLE CRAZY'

Pagano, who is 6-foot-2, started the race at 230 pounds and finished around 210, living off a rigid diet of decent freeze-dried food hydrated by a water maker onboard and assorted snacks, while trying to consume 5,000 calories a day to maintain strength. As for sleeping arrangements, he somehow managed to curl his large frame into one of the two compartments at either end of the boat. The bathroom was a 5-gallon bucket. Making life as accommodating as possible was a high priority, he and Miller were pre-warned, and because it’s such a grueling endeavor, you aim to avoid nuisances.

A hurricane delayed Pagano and Miller for three days, but the boat was sturdy enough to survive it.

“I think you have to be a little crazy to try something like this,” Pagano said, laughing. He broached the idea with his family at a kitchen table talk that started with … “I have to talk to you about something.”

"My family and friends were concerned initially, but they came around when they found out all the safety precautions involved. You have to take special classes that go into the trip. You’re physically trained, as well as mentally trained, if something goes wrong.

“...In La Gomera, I was anxious and nervous, but I was ready to go. We got delayed five days because of weather. You make that step into the boat, there is the realization that the last two years of work and preparation that you put into this was worth it and was going to be applied. It was actually happening. It dawns on you that when you tell people that you’re going to row the Atlantic Ocean, some people believe you, some think that you’re just crazy, but making that first step and rowing was very special.”

Pagano and Miller alternated rowing in three-hour shifts, for nearly 12 hours a day each, for close to two months. The three hours of daily downtime was spent eating and mostly sleeping. They kept the boat moving 24/7 toward their destination, but there were times when the trip would seem endless with the whole span of the Atlantic spread out there and nothing but water on the horizon.

“You keep yourself going,” Pagano said with a smile. “I listened to music and sang, and thankfully no one was out there to hear me. The best times were at night, with the moon and the stars. Words can’t describe it. And there were definitely tough moments. We hit a patch where the currents and winds weren’t really helping us as much as we were told they were going to, and we felt like we were rowing through mud. We weren’t getting the miles per shift we thought we should be getting. On a good day, we would get 7 miles per shift, and some days, we would get 2. That was demoralizing.”

Pagano said the ignorance of their team, Cranial Quest, worked to their advantage. They had no points of reference when it came to handling waves, or hurricanes.

“It was nothing I’ve ever been through before, and we knew a hurricane was coming,” Pagano said. “You brace yourself inside the cabin, and the waves crashing against the boat magnifies the sound. We just didn’t know any better. That was the beauty of it. I was never scared of the waves. There was one incident with a cargo ship at night though. We were a week away from Antigua and there was a ship approaching us. We saw it on our monitors and radioed them that they were getting too close, and we didn’t get a response. We radioed them again and didn’t get a response. They got so close that we could smell their diesel fuel, which was concerning.

“The ship was about 235 meters long and was massive. Bigger than any of the waves. And it was at night and we’re so small in comparison, 23-feet long and about 5-and-a-half feet at the widest point. And it’s dark. They came within 1 nautical mile, which is too close. We were told at 2 miles that we should start radioing them, but they didn’t listen for the first or second warnings. They eventually changed course. It was way too close for comfort.”

"My grandfather was my motivation for this. He was my inspiration, and I wanted to do it for all of the other families who have to live with and go through that disease." – George Pagano

Pagano had enough growth on his face that he looked like a caveman. He was emaciated, didn’t smell too good and hungered for a cheeseburger and a Coke. The trip trimmed him considerably.

Though super yachts initially blocked Pagano’s family from seeing Washington’s Crossing enter the Antigua harbor, it's such a big event that their arrival was greeted with flares, air horn after blaring air horn intermingled with cowbells and one yacht blasting “Eye of the Tiger.”

Pagano couldn’t really take a firm step onto dry land when he arrived because his legs were shaky from being on the boat 58 days. His sister, Mary Emily, was the first to greet him, and she supported him because he almost fell. He and his family joined in an emotional group huddle, where they expressed how proud they were of George.

But he stopped them short when he told them, “We did it.”

Pagano intends to try the Talisker Whisky Challenge again five years from now. He is currently prepping for the LSATs and intends to go to Villanova Law School, following the path of his sister, who’s also an attorney.

“I was glad for both of us when we landed, but moreso for all of the people that supported us. Her family and friends, my family and friends. All of the people who believed in us. The Holy Child and Haverford School communities. And we did it to finish, but we also did it for the ALS Association of Philadelphia and how they supported my grandfather.

“My grandfather was my motivation for this. He was my inspiration, and I wanted to do it for all of the other families who have to live with and go through that disease, not only to raise money but to raise awareness," he said. "There is no cure right now for ALS. My grandfather passed away in 2003, when I was 11. I always wanted to do something for this cause.

"He was always with me.”