One boy slumbers while another suffers: A mother reflects on Hironimus vs. Nebus 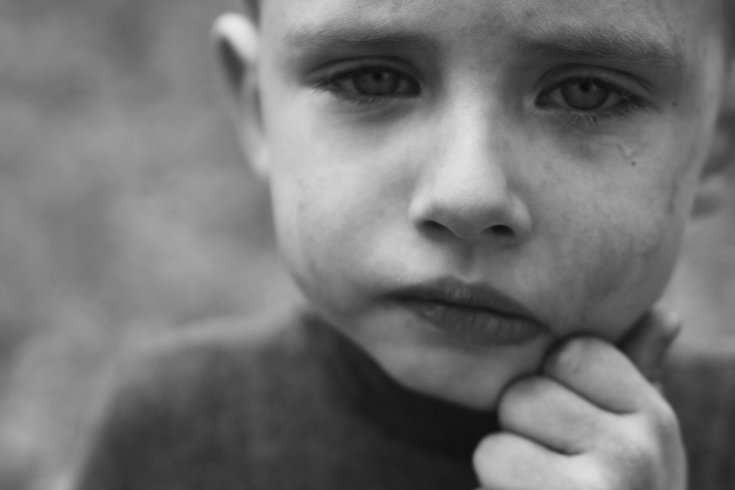 Tonight, I wonder why my son is safe and close to my arms when another little boy — longing for his own mother — is hurting so. Note: This image is not the Hironimus boy.

My 3-and-a-half-year-old son sleeps. He slumbers peacefully in dreamland. When I hear him call my name, I go to him. He can trust that I am here.

Another little one — just a year older than my son — slumbers down the road. I’ve never met this child, but I think of him daily. I’ve stayed up many nights writing on his behalf. I pray that he slumbers peacefully, but I am unsure. I imagine when he wakes that his heart is heavy with missing and loss. The date of the infamous court-ordered cutting of his body is now set for Thursday, June 11th. Given this, I fear he wakes to feelings of abandonment, profound fear and confusion.

I can’t sleep when I consider what it is like for him to wake up.

Whenever I reflect upon the strange lot of chance, I wrestle with deep feelings of agnostic angst. When I worked as a hospital chaplain, I encountered women in their 30s, dying of cancer or sudden car accidents. I was always struck by the strange twists of fate that I could walk with ease and stand next to their hospital beds. I could hold hands of women my age and do my best to offer comfort and compassion. I walked away wondering why their lives were precariously upended and I was free. Tonight, I wonder why my son is safe and close to my arms when another little boy — longing for his own mother — is hurting so.

The hurt is compounded by the fact that it is caused by both the boy’s father, a man whom he should be able to trust and love, and the State of Florida’s family court system, a system that should be putting the wellbeing of children first and foremost in its consciousness. What will it be like for this sweet boy to grow up having experienced such profound failure on the part of the individuals and systems that should have been stalwart supports with regard to his overall well-being? How will he learn to trust and develop secure attachments, skills central to living an emotionally regulated and rich life?

I’m writing about the 4 and-a-half-year-old boy central to the recent Hironimus vs. Nebus “miscarriage of justice.” While I’m grateful that my PhillyVoice articles relating to the painful and terrible drama that has engulfed this child have been read by tens of thousands — the fact that this boy continues to suffer remains acutely present in my mind.

Inspired by my research, I've reached out to fellow journalists who have covered the story. I’ve called court offices and domestic violence shelters. I’ve contacted the Department of Children and Families to speak to one of their key administrators. I could make this a full-time job and I want to continue to do what I can.

However, what I really want to do is hold that little boy. Offer comfort. Play trucks and transformers. Laugh. And return him safely to the arms of his grieving mother, Heather Hironimus.

Currently, I am filled with deep concern when I imagine him being cut by Dr. Gary A. Birken of Hollywood, Florida for an alleged "foreskin problem." A pediatric urologist, Dr. Charles Flack of Boynton Beach, Florida, already testified in court that this boy was not in need of a circumcision, a risky elective medical procedure. Nevertheless, Nebus filed a motion to “compel medical treatment” even when none was warranted. Instead of taking Dr. Flack’s testimony to heart or considering that the boy had lived his entire life healthy and intact, Judge Jeffrey Dana Gillen failed. A literal and rigid reading of a dated parenting contract clause became more important than the well-being or rights of the child in question. Gillen failed to dismiss Nebus’ motion. No legal remedy currently exists to reverse this profound failure, sparking understandable outrage.

Did someone try to retract the Hironimus boy's penis and create a "foreskin problem"?

Furthermore, we are wise to question what, if anything, changed between the examinations of Dr. Flack and Dr. Birken?

The boy's father, Dennis Nebus, claims his son has "phimosis" -- meaning the foreskin is too tightly fused to the glans of the penis and won't retract. Sadly, a number of American pediatricians don't understand the natural function of the foreskin in infants and young boys: it isn't meant to retract. The foreskin is meant to be tightly fused to the glans. Too many American parents of intact boys are mistakenly, and dangerously, told by medical professionals to purposefully retract the foreskin to "clean" the penis. This would be akin to cleaning the vagina of a little girl. It's not necessary. One only needs to clean what is seen. Tragically, if a boy's foreskin is purposefully retracted, not only is the experience very painful, but it tears protective tissues and opens up the penis to infection. A round of antibiotics can be given, or the "phony phimosis" diagnosis can be "cured" through circumcision.

Did someone try to retract the Hironoimus boy's penis and create a "foreskin problem"?

The boy allegedly reported that Nebus has a history of pulling hard on his penis. Gratefully, survivors of sexual violence receive counseling at domestic violence shelters by experts trained in understanding the dynamics of such assault. Nonetheless, my heart remains heavy when I reflect upon this information.

Add to the fearsome image of a little boy suffering from a forced retraction of his foreskin the fact that this precious child hasn’t seen his mother, or heard her voice, since she was arrested at the domestic violence shelter. How anyone involved in child welfare could think it is a good idea for a little one not to see or hear from his mother at such a critical time is beyond me. Even parents with known criminal offenses often receive, at the very least, supervised visitation rights, and Hironimus has a clean record. By all accounts, she is a loving and devoted mother. Why Nebus’ alleged history of abuse and criminal record weren’t considered by the court is also deeply troubling. The bureaucratic and legalistic coldness that has relegated this little one to his current plight is heartless.

While Hironimus had primary custody for all of the boy’s life thus far, she is currently stripped her of her right to custody -- even to see her son in supervised visitations or speak to him on the phone. In fact, next month, Hironimus goes to court to face the charge of “interference with custody,” a charge that could result in the permanent loss of contact with her son and imprisonment.

No four-and-a-half-year-old should experience such emotional confusion and pain.

While it is true that the boy didn’t see his father during the time at the shelter, from everything I’ve researched about the father, this is actually a very good thing. For the first time since he was three months old, the boy experienced 90 days without weekly visitations with his father — visits that too often left him neglected, bereft, scared. For the first time, he could lay down at night and welcome peaceful dreams. He could thrive and experience a stretch of happiness. He was able to open and begin an important and vital healing. For the first time, he received quality counseling to share his experience, stress, and fears.

And then, he was suddenly taken from that healing place and given to his father.

He now is being subjected to confusing counter-narratives of events that he knows are true, an abrupt and painful assault on his emotional well-being as he no longer has contact with his mother, the potential for abusive treatment, and the impending fear of a soon-to-manifest unwanted and unwarranted surgery on the most private part of his body.

No four-and-a-half-year-old should experience such emotional confusion and pain.

So, I stay up at night and work. I work diligently to counter the power of chance that placed one beloved boy into my arms and another into the crushing and cruel twists of circumstance.

Please join me in this work. Read up on the case. Get informed. Act.

Here are four things you can do:

1. Sign this petition and share it widely, specifically share it with Dr. Gary Birken. Contact administrators at Joe DiMaggio's Children Hospital in Hollywood, Florida. Remind them that as a "pillar of the community" they should be advocating for the safety and well-being of the boy in question, not taking a knife to his genitals. You can stay abreast of current updates regarding Hironimus and her son here.

2. Contact your local domestic violence shelters to ask the administrators of such shelters to get involved. Consider what it means for a woman to be charged with custodial violations for seeking out the legitimate support of a domestic violence center. Remember, we aren’t talking about two healthy parents who disagree about circumcision. No. A domestic violence shelter would not have let Heather Hironimus and her son in if they were solely seeking refuge from the court ordered circumcision — even though the ethics of such an order, according to this piece from the International Business Times, shamed America in the eyes of the world.

What if a legal precedent is set that sends a woman to prison, or strips her of her right to custody, because she kept her child (or children) away from an alleged abuser while seeking support at a shelter? This would be devastating not only to Hironimus and her son, but to all women/children across America seeking sanctuary from abuse. The charges of custodial interference must be dropped.

3. Please take the time to send the mother a personal note of positive encouragement at this address: Heather Hironimus, PO Box 741345, Boynton Beach, Florida, 33474-1345. You can also send the Hironimus boy notes of encouragement and simple gifts via the above address. From what I understand, he loves Transformers.

Hironimus currently faces the daunting challenge of paying for extensive legal and court fees. For a single mother living with her own mother, I imagine this feels overwhelming. You can offer financial support to the Hironimus family here.

When it comes to Nebus, please pray or meditate that his heart softens and his mind clears. Nebus has reported that he has received numerous death threats due to this case. Certainly, peaceful means of challenging his behavior must be central to our healing efforts. May he be inspired to transform himself into the man he could, at his best, be.

4. Finally, write a formal complaint about how Hiroimus vs. Nebus was handled by Judge Gillen — who has since been rotated to another court and no longer involved in the case. Nonetheless, critiques provide important feedback -- for certainly one must question his capacity to evaluate prudent information effectively. Direct your letter to this judge.

Be sure to request that Heather Hironimus has access to see, comfort, check in on, and nurture her son asap.

Children are resilient and their capacity to heal from singular events of trauma is remarkable. Love indeed is the greater force — much more powerful than any surgical instrument. The sooner this child can be surrounded by the power of love, the faster the healing can begin.

Let us continue to advocate for justice with regard to this case. Let us be committed to positive and compassionate action benefitting the Hironimus boy. May he once again know peaceful dreams and come to fully experience what it is like to awaken with ease in his heart.