Movie review: 'Aladdin' remake mostly succeeds- except for Will Smith 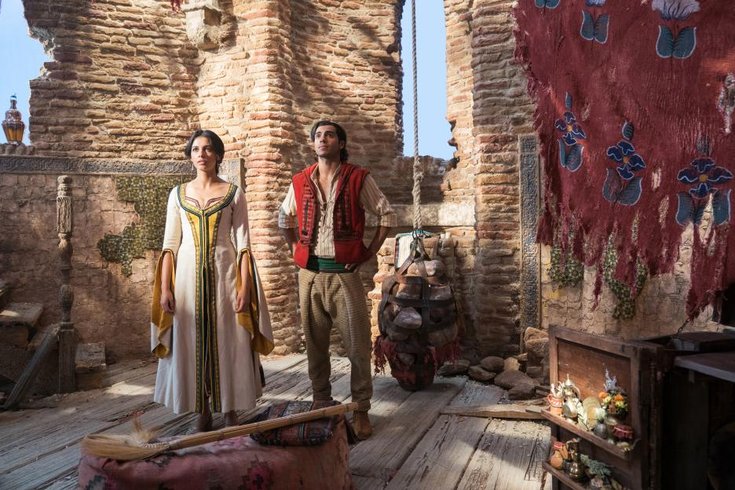 Mena Massoud and Naomi Scott in the 2019 movie Aladdin

The latest in Disney's seemingly endless series of remakes of its animated classics is a live-action re-imagining of "Aladdin," the beloved film from 1992 that won two Oscars and cemented the studio's return to animation glory.

The new Aladdin, directed by Guy Ritchie, offers enough positive things to justify its existence. These include a beautiful look, outstanding performances from two mostly unknown leads whose chemistry is electric, and well-done recreations of some of the original movie's iconic moments.

Ritchie, who's mostly known for gritty British crime comedies, a couple of very overrated Sherlock Holmes films, and a brief marriage to Madonna, was a highly counterintuitive choice for this material, but he does a more than capable job.

But there's one huge element that doesn't work: West Philadelphia's own Will Smith, who steps into Robin Williams' old part of the Genie and is just wrong in practically every way. With the possible exception of the songs, the Genie was the best thing about the first Aladdin; in the new film, the Genie is the worst part.

Based on the ancient Middle Eastern folk tale, Aladdin tells the tale of the eponymous "street rat" (Egyptian/Canadian actor Mena Massoud), who roams the streets of the fictional land of Agrabah. One day Aladdin meets Princess Jasmine (British actress Naomi Scott), and is instantly smitten. He can't be with her if he's not a prince, so with the help of a blue genie (Smith), he transforms himself. Meanwhile, the characters do battle with Jafar (a terrifying Marwan Kenzari), the Sultan's evil, power-hungry adviser. 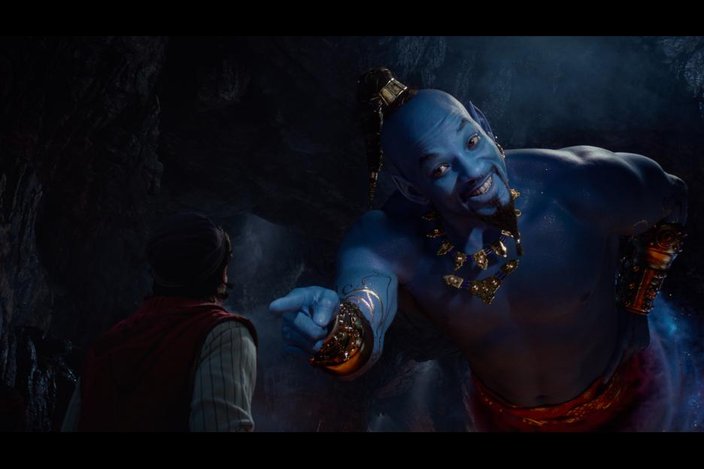 Neither Massoud or Scott was particularly known at the time of their casting, but they're both well-chosen, and their chemistry is something to behold, especially in the "A Whole New World" number, which is wonderfully reproduced here. We're going to be hearing a lot more from both of them soon, I suspect.

As for the third major role… now, perhaps it was impossible to replace Robin Williams, or for that matter to fill the role with anyone in human form. But the conception of the character here, and Smith's execution of it, adds up to a list of miscalculations large and small.

Smith, when he's in guise in blue, just looks ridiculous, which was the first impression held by just about everyone who watched the initial trailer for the project a few months ago. He attempts to replicate Williams' motor-mouth delivery, but that sort of free-styling was so unique to Williams that it just sounds wrong coming from Smith.

At times, Smith's genie is a comic relief character, an exposition machine, and even, in one scene, a wingman. He also gets a misbegotten romantic subplot, with ex-SNLer Nasim Pedrad as the princess' handmaiden. And especially disappointing from a pro like Smith, he brings surprisingly low energy to some of the musical numbers, especially the otherwise visually stunning "Prince Ali" sequence.

Unlike Tim Burton's ill-advised remake of "Dumbo" earlier this year, which added about an hour of new material featuring boring human characters, the new "Aladdin" mostly sticks to the structure and plot beats of the original film. The plot, like last year's "Beauty and the Beast" remake, also adds a touch of feminism, in giving Princess Jasmine ambitions to lead the kingdom herself. But this is done in a way that feels organic and not forced.

Also back are the suite of exquisite songs written by Alan Menken and Howard Ashman (Ashman, the lyricist who originally conceived of the idea of an Aladdin movie, died of AIDS-related complications in 1991, and was relieved on some of the songs by Tim Rice.) There are also a couple of new songs, including the Jasmine first-person tune "Speechless," which Menken wrote along with the "La La Land"/"Dear Evan Hanson"/"The Greatest Showman" team of Benj Pasek and Justin Paul. Pasek was born in Philadelphia and raised in Ardmore.

Some of the film's other weaknesses are left over from the original, starting with the haphazardly inconsistent rules of how magic works in this world. For some reason, Gilbert Gottfried- who is still alive and actively working- isn't brought back to voice the parrot Iago. And while the '92 film might have the most perfect final minute of any Disney animated movie, the ending here isn't nearly as well done.

The 2019 "Aladdin" offers plenty to love, and the preview audience I saw it with applauded wildly at the end. The original "Aladdin" is currently in the Disney Vault, but the company will be doing away with that vault later this year when it launches its Disney+ streaming service. Audiences will be able to compare their Aladdins then, and while the new film is far from a failure, the 1992 edition was a better movie, with a much better genie.