In a sliver of East Falls, residents are concerned about volatile behavior of neighbor with a long rap sheet 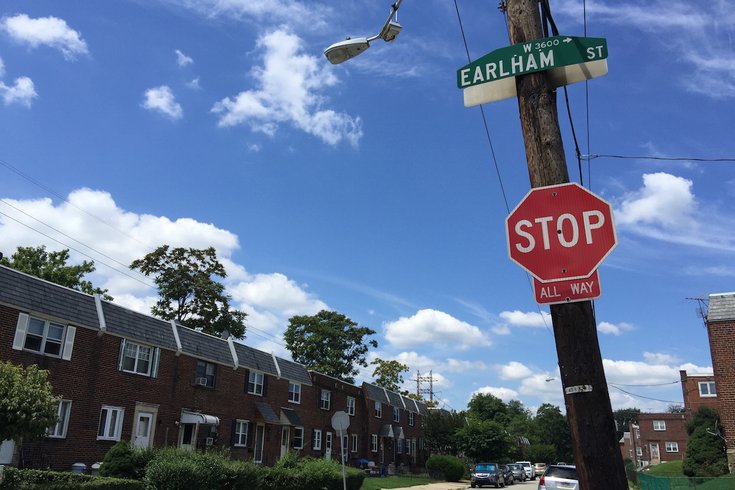 Residents in one section of East Falls told police a neighbor ran naked in the streets and screams loudly at all hours, day and night.

What would you do if someone was running around your neighborhood naked and screaming at nobody in particular at all hours of day or night?

In the pocket of Philadelphia’s East Falls neighborhood that’s nestled between Philadelphia University and the Schuylkill River, that’s what residents, and the police who have responded to their numerous calls, say they’ve found themselves dealing with lately.

They know who the man is. After all, much of the activity takes place in front of his home in the 3500 block of Cresson Street. And there was no mistaking that it was him in the buff, taking a half-mile trot down to Ridge Avenue and back on a Thursday night in July.

"Officers will continue to patrol the area, and residents are urged to call police if they are disturbed or alarmed." – Officer Julianne Bruins, 39th Police District

But, despite numerous calls to police, the 20-something man – whose identity PhillyVoice is concealing because no charges have been filed in connection with the recent incidents – was carrying on again outside his home at 2 a.m. Wednesday.

Suffice it to say, neighbors are concerned.

“The neighborhood was pretty quiet until a month ago when I started noticing some bizarre behavior,” said a neighbor who identified herself as Pat Smith on a neighborhood message board where locals are chiming in about the disturbances. “There were bizarre people around, people coming and going at all hours of the night. We were thinking maybe it was about drugs.”

People come and go from residences for any number of reasons – many, non-criminal – but then came the night of July 21. Neighbors were outside as they are wont to do before the sun sets on a summer evening.

“My husband noticed a naked man in the middle of the street. Kids were outside playing, and this naked man just walks down the street toward School House Lane. He went down to School House and Ridge, then turned around and started running back to the house. He was talking to himself, but not making any sense.”

Smith, a mental-health professional, said she thinks it’s less about mental illness and more a drug-induced psychosis akin to that brought on by PCP.

A bunch of people called the police that night, and officers arrived at the house of the man, whose rap sheet includes charges of terroristic threats with intent to terrorize another and, among others, drug-related cases, according to court records.

“A retired police captain who lives around the corner went up when the officers were done talking to him. He said they told him he’d gone inside and put his pants on, so we can’t arrest him,” said Smith, noting that she saw him “holding his head, looking like he wanted to come back outside but knew he’d get in trouble.”

That was the standout issue, but neighbors also complain about regular screaming coming from the property. One went so far as to call the Department of Human Services to have them check in on three children – 9 months old and 3- and 4-years-old – but neighbors said neither they nor the man's girlfriend have been seen there in recent weeks.

A police spokesperson confirmed that numerous calls were placed to 911 on July 21, saying "a man was naked and screaming, he lives on the 3500 block of Cresson Street, and he was believed to be high."

Fast forward to Wednesday morning when, for almost an hour, “he was screaming at the top of his lungs. … His behavior can be frightening.” He unloaded a profanity-laced tirade that afternoon as well, according to another neighbor who requested anonymity.

Police have been called at least five times, neighbors said, but nothing seems to change, which is particularly worrisome to them, considering the case of Pamela Nightlinger of Northeast Philadelphia, who was allegedly killed with a crossbow by her husband, who reportedly stood naked in the doorway of his home as his dying wife ran to a neighbor’s house for help.

“Sometimes, when it’s around dinner time and the windows are open, it’s so bad that I think someone got hit by a train or a car,” Smith said. “I’m just afraid that he’s mentally unstable and in a drug psychosis. This is such a quiet neighborhood. How is this even happening?”

When told about the neighbors’ concerns on Thursday afternoon, Captain Michael Craighead of the 39th Police District – which covers East Falls – assured them that “we will investigate.”

Officer Julianne Bruins from the 39th District reached out to explain that the person in question has been "transported several time to an area crisis treatment center and [responding officers] were disturbed to find that he is being released over and over."

"Our officers are progressively trained in crisis response but can unfortunately not keep people in treatment programs," she wrote, noting that no evidence of drug sales was evident, according to officers. "Officers will continue to patrol the area, and residents are urged to call police if they are disturbed or alarmed."

NEIGHBORHOOD CRIME ON THE RISE

This case comes at a time when police are paying closer attention to East Falls, which has seen a spike in burglaries and other crimes in recent months.

A robocall was made to residents in recent days “to alert residents of an increase in both thefts from autos and burglaries,” said Craighead.

“We would like visitors and residents to be mindful of the idea to conceal all valuables in their vehicles so as not to fall victim to someone who will both damage their vehicle and steal their property,” he said. “Additionally, we ask the residents to call us when they see something that just doesn't make sense to them like a vehicle circling the block, or a work truck, the appears and the neighbor knows that the residents are on vacation, or folks going door to door who appear curious for one reason or another. All are healthy and reasonable reasons to call us and allow us to investigate.”

Craighead also said that, in many cases, residents and visitors leave car doors open or valuables exposed, and both things attract thieves who would just move on otherwise.

"Cameras, alarms and vigilant neighbors are a great combination for us. We asked that they call us whenever they are suspicious about anything. Better safe than sorry,” Craighead said. “We would like visitors and residents to give us the opportunity to protect and serve.”